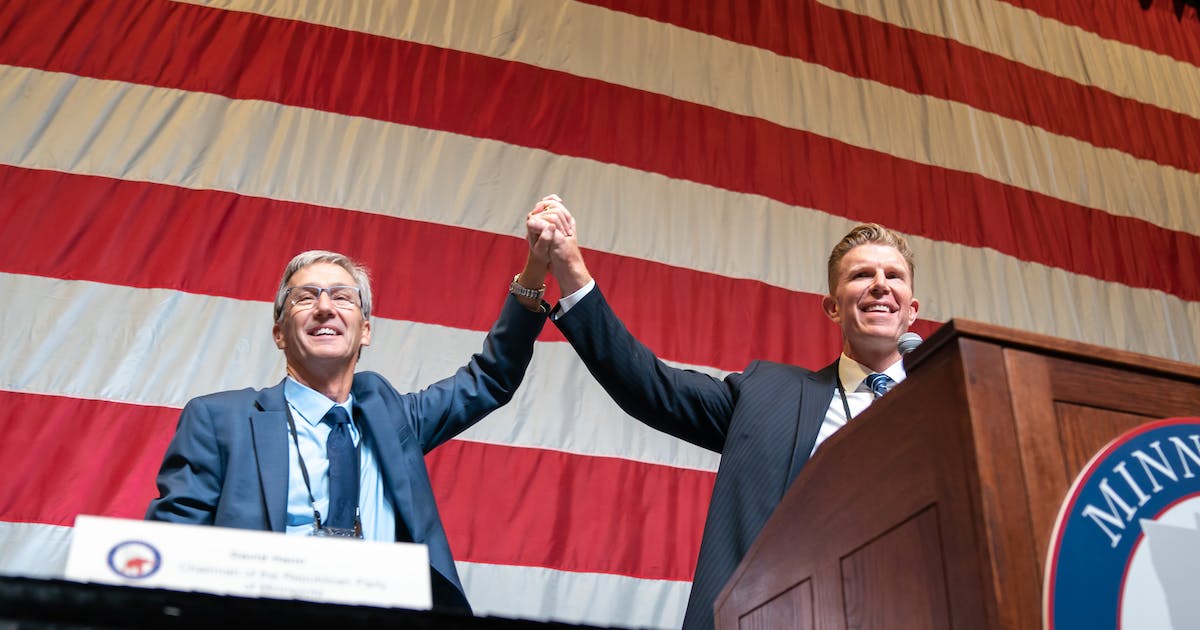 Scott Jensen won the Minnesota Republican Party’s endorsement for governor Saturday, picking up his party’s backing on the strength of a campaign built around opposition to pandemic restrictions and concern about COVID-19 vaccines.

Delegates gathered at the GOP convention in Rochester chose the former state senator and doctor as their top pick to take on DFL Gov. Tim Walz in November after a heated endorsement fight that started with a crowded field of contenders and featured multiple rounds of balloting.

“We have to ask ourselves: How are we going to win?” Jensen told the crowd. “This is about potentially our last, best chance. We can do this together. … Together we can absolutely bring that message to Tim Walz: ‘Game over, you’re done.'”

It remains to be seen if Jensen will face any GOP challengers in the August primary. The party endorsement typically makes whoever wins it the front-runner. In a statement on Facebook on Saturday night, Kendall Qualls said he and his wife planned “to transition back to private life.” Walz enters the race with fundraising that easily outpaces his GOP rivals and the high profile afforded by his time in office.

Jensen’s message resonated with the roughly 2,200 party activists. Now he must sell it to a broader audience of voters, as he tries to break a GOP losing streak in statewide races that dates to 2008. Jensen and others are trying to seize on what looks like a promising year for GOP candidates nationwide. President Joe Biden’s poll numbers are lagging, and the president’s party historically fares poorly in midterm elections.

Supporters said Jensen is the most electable choice.

“I think he’s got the best chances in November to win against Gov. Walz,” said convention attendee Kyle Christensen, who works in marketing for a health IT company. “He’s survived all of the attacks that Democrats and others have thrown at him, so I think he’s tested.”

The family physician from Chaska spent one term in the Legislature, where he was regarded as moderate. He worked with Democrats on bills to lower prescription drug prices and require universal background checks for gun sales and transfers, among other measures. He apologized to delegates Saturday for the gun legislation, saying he had been on the “wrong side” of the issue.

Democratic state Sen. Matt Klein, a doctor from Mendota Heights, took aim at the senator he served with at the Capitol during an event Friday down the street from the GOP convention.

“As doctors we do take a Hippocratic oath to do no harm. But to Scott Jensen, this was just another thing he could sacrifice at the altar of his political ambitions,” Klein said.

“No one has done more than Scott Jensen has done to convince people that the safe, effective measures we have to prevent and treat COVID-19 are not helpful and that the COVID-19 vaccine is ineffective and dangerous.”

Jensen veered sharply to the right on the campaign trail. On Saturday, he said his top priorities would include rewriting emergency powers legislation — a favorite target of Republicans through the pandemic — as well as pushing a constitutional carry law on gun possession, and voting ID laws. If elected, Jensen said, the Metropolitan Council is “coming down,” and he’d look hard at dropping the personal income tax.

Jensen reiterated his suggestion that Secretary of State Steve Simon should be jailed for how he has handled the state’s elections — there have been no allegations that Simon committed any crime — and in his speech, he embraced unproven, fringe ideas about dead people voting. He said in his first month he would commute former Brooklyn Center police officer Kim Potter’s sentence for her fatal shooting of Daunte Wright, though governors lack the authority to unilaterally commute sentences.

On the campaign trail, Jensen has often focused on the pandemic, condemning Walz’s executive decisions and urging “civil disobedience” among Minnesotans in response to any remaining mask policies and vaccine requirements.

He joined a federal court case to pause COVID-19 vaccinations for children and has said he is not vaccinated because he has natural immunity from a past infection. His comments raising concerns about COVID-19 vaccines on Fox News and social media have landed him in the national spotlight.

Jensen was one of the first candidates to enter the governor’s race and became an early front-runner, dramatically outraising other Republicans last year.

His campaign poured money into the endorsement battle. Jensen and Birk had their names and campaign logo printed on room keys at a hotel by the civic center and created mock jerseys they were selling for $50 at the convention. Friday night, they held a large outdoor afterparty, where a long line stretched down the block to enter and the crowd ate, drank and danced to a DJ under string lights.

While Jensen attracted the most cash last year, Qualls, who entered the race in January, received more in the first quarter of 2022. An Army veteran and former health care executive from Medina, Qualls quickly gained a strong footing. He lost to US Rep. Dean Phillips in the 2020 race for the Third Congressional District by 11 percentage points. He has never held elected office and has pitched himself as a political outsider.

For convention delegate Patrick Staley, who was wearing a Qualls shirt, that was a key selling point.

“As an outsider, he has a chance to reach out and probably add folks to the Republican coalition that maybe haven’t looked our way in the past,” Staley said.

Qualls charged Saturday that Democrats have “turned Minnesota into the next California,” to boos from the crowd.

“I’m gonna be Joe Biden and Tim Walz’s worst nightmare … because I’m living proof the American dream is alive and well,” he said. “Everyone in this conference hall wants to beat Tim Walz. With your help, I’m the only candidate that can do it.”

Along with Murphy, dermatologist and first-time candidate Neil Shah, longtime state Sen. Paul Gazelka and former Hennepin County Sheriff Rich Stanek competed to challenge Walz. Murphy briefly led the pack in delegate voting Saturday as they worked their way through many rounds of balloting, but he helped the tide turn in Jensen’s favor when he backed the doctor and called Qualls a “sellout.”

Stanek, who has been coping with injuries from an April car accident, was not at the convention. A large banner reading “Get well soon Rich!” hung at the civic center, where the walls and bleachers were covered with signs from the campaigns. Stanek’s campaign said he is evaluating his options.

The governor’s race was the last of four rounds of endorsements, with Republicans on Friday picking Jim Schultz for attorney general, Kim Crockett for secretary of state and Ryan Wilson for state auditor. Schultz, a 36-year-old political newcomer who grew up in South Haven and went to Harvard Law School, bested Doug Wardlow who was making his second bid for attorney general. But Wardlow hinted on social media Saturday that he may not be out of the race.

“I am humbled by your support,” Wardlow posted on Facebook. “Don’t throw away your signs quite yet.”