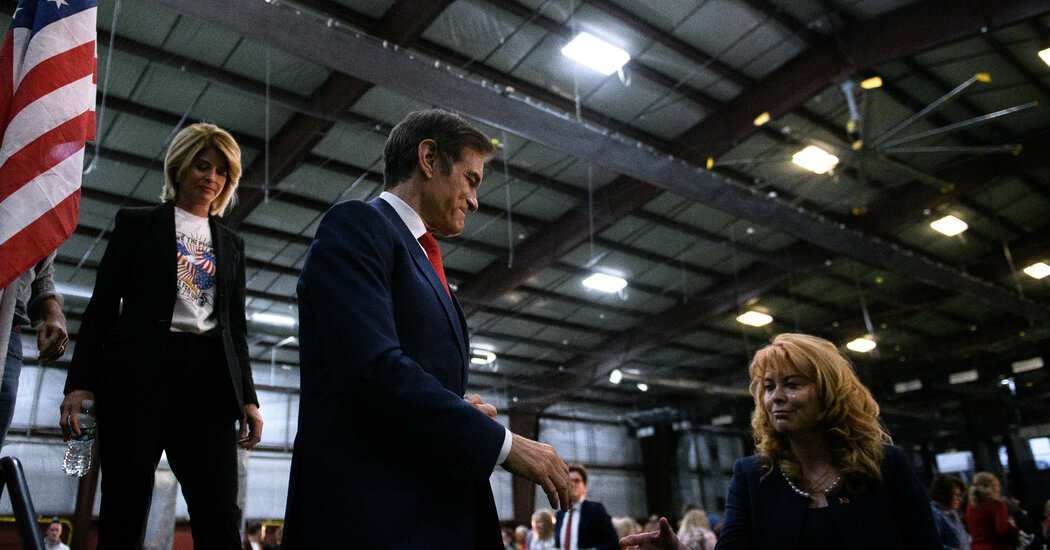 To a degree surpassing any other contest in the 2022 midterms so far, Donald Trump has poured his personal prestige into Pennsylvania’s Republican Senate primary race, which is going through a final spasm of uncertainty as Kathy Barnette, an insurgent candidate with a sparse résumé, gives a last-minute scare to Trump’s pick, Dr. Mehmet Oz.

The outcome of that election, as well as the GOP contest for governor, is threatening to implode the state’s Republican Party — with a blast radius that might be felt in states as far away as Arizona, Georgia and North Carolina over the coming weeks and months .

The turbulence also has major implications for Trump’s hold on the party, which is growing more alarmed that the former president’s involvement in primaries could scupper Republicans’ chances of reclaiming the Senate despite President Biden’s unpopularity.

Trump endorsed Oz, a celebrity physician, over the advice of many Republicans inside and outside Pennsylvania. The bill is coming due, those Republicans now say.

Many of Trump’s own voters have expressed skepticism of Oz, who has fended off millions of dollars in negative advertising highlighting his past Republican heterodoxies on issues as varied as abortion and gun rights. As of Monday, Oz is leading by nearly three percentage points in the RealClearPolitics average of polls in the primary, which roughly matches the Oz campaign’s latest daily tracking poll, I’m told.

It’s not clear how late-deciding Republicans will ultimately vote, although a new poll by Susquehanna University found that 45 percent of respondents who had made up their minds “in the last few days” were backing Barnette.

On Saturday, Trump finally endorsed Doug Mastriano, a conspiracy-theory-minded retired military officer who leads polls in the governor’s race, in an apparent attempt to hedge his bets.

“He’s clearly upset that it’s not going his way,” said David Urban, a political operative and early Trump backer who led the former president’s efforts to win Pennsylvania in the 2016 election.

Urban is supporting Dave McCormick, a fellow West Point graduate, in the Senate race, and said he had not spoken to Trump recently about the primary.

The McCormick camp is hoping the fireworks between Barnette and Oz will earn him a second look from voters, who seem to be wavering between the three leading contenders.

The crucial swing state will hold its primary on May 17, with key races for a US Senate seat and the governorship.

Not everyone’s buying it.

One veteran Republican operative in Pennsylvania who is not aligned with any Senate campaign likened McCormick to Hans Gruber, the villain in the movie “Die Hard,” who tries to fire upward at Bruce Willis’s character even as he is falling from the top of Nakatomi Plaza .

Barnette has endorsed Mastriano and vice versa, and the two have held events together — almost as if they are running together as a kind of super-MAGA ticket. She has fended off questions about her background in recent days, including about her military service and her past Islamophobic comments.

Oz, who if elected would become America’s first Muslim senator, called those comments “disqualifying” and “reprehensible” in an interview on Saturday with The Associated Press.

In the governor’s race, Republicans aligned with the party establishment are desperate to stop Mastriano from winning the nomination, and have urged other candidates to unite around former Representative Lou Barletta, who is running for governor with the help of several former top Trump campaign aides.

One of the first members of Congress to embrace Trump, former Representative Tom Marino of Pennsylvania, blasted the former president at a news conference this weekend for what he said was a lack of “loyalty” to Barletta.

In a follow-up interview, Marino said he hadn’t been planning to endorse anyone in the race, but decided to back Barletta because he felt that Barletta had earned Trump’s support by risking his career to throw his lot in with Trump early in the 2016 campaign.

“I did what I did because I was just so outraged” over Trump’s endorsement of Mastriano, Marino said. “Loyalty is important to me.”

Watching the events in Pennsylvania, which included the leading candidate in the Democratic race for Senate, Lt. Gov. John Fetterman, suffering a stroke on Friday, plugged-in observers in both parties used words like “gobsmacked” and “stunned.”

Recriminations are flying over why the Pennsylvania Republican Party failed to appreciate the rise of Barnette and Mastriano until it was too late to arrest their momentum. Ballots have already been printed, fueling despair among party insiders that the efforts to unify the party against one or both outsider candidates might ultimately prove futile.

“The press paid very little attention to Barnette until the last two weeks,” said G. Terry Madonna, an expert on Pennsylvania politics who ran polling at Franklin and Marshall College for many years.

National Democrats are watching the events in Pennsylvania closely, and many predicted that the results of Tuesday’s contests would affect other Republican primaries for Senate in the weeks to come.

And while the public’s anger over inflation and supply-chain disruptions is weighing in the GOP’s favor, Democrats hope to compete in the fall against candidates they perceive as easier to defeat, like Barnette.

The greatest impact of Trump’s meddling might be felt in Arizona, where he has yet to issue an endorsement. Trump has slammed the establishment candidate, Attorney General Mark Brnovich, for failing to overturn Biden’s victory there in 2020, but has not yet chosen an alternative.

David Bergstein, the communications director at the Democratic Senate campaign committee, said that Trump’s meddling in GOP primaries was having an even greater effect on the Republican Party than many Democrats had anticipated. “Chaos begets chaos,” he said.

A new day for Pat McCrory

When Gov. Pat McCrory of North Carolina signed legislation that critics called the “bathroom bill” in 2016, it set off a firestorm.

Why are these midterms so important? This year’s races could tip the balance of power in Congress to Republicans, hobbling President Biden’s agenda for the second half of his term. They will also test form President Donald J. Trump’s role as a GOP kingmaker. Here’s what to know:

What are the midterm elections? Midterms take place two years after a presidential election, at the midpoint of a presidential term — hence the name. This year, a lot of seats are up for grabs, including all 435 House seats, 35 of the 100 Senate seats and 36 of 50 governorships.

What do the midterms mean for Biden? With slim majorities in Congress, Democrats have struggled to pass Mr. Biden’s agenda. Republican control of the House or Senate would make the president’s legislative goals a near-impossibility.

What are the races to watch? Only a handful of seats will determine if Democrats maintain control of the House over Republicans, and a single state could shift power in the 50-50 Senate. Here are 10 races to watch in the House and Senate, as well as several key governor’s contests.

When are the key races taking place? The primary gauntlet is already underway. Closely watched races in Pennsylvania, North Carolina and Georgia will be held in May, with more taking place through the summer. Primaries run until September before the general election on Nov. 8.

Go deeper. What is redistricting and how does it affect the midterm elections? How does polling work? How do you register to vote? We’ve got more answers to your pressing midterm questions here.

The law, which required transgender people to use public restrooms that matched their birth gender, drew protests from major businesses and athletic powerhouses including the NBA and the NCAA, which withdrew their All-Star Game and March Madness basketball tournament games from the state.

Fast-forward six years, and Republicans are pushing anti-transgender legislation across the country and punishing companies that dare to object. But McCrory, running for Senate in North Carolina, is flooding in his attempted return to electoral politics, trailing heavily in polls to a rival backed by Donald Trump.

McCrory also isn’t talking on the campaign trail about the hot-button issue of LGBTQ rights that brought him to national prominence back in 2016.

“It’s not an issue that drives me, never was,” McCrory said in a telephone interview on Monday. “But it’s an issue, if asked, I’ll state where I am.”

McCrory’s bid to replace Senator Richard Burr, who is retiring, has been complicated by the strength of Representative Ted Budd, who has support from both Trump and the conservative Club for Growth and seems to be leading the race.

McCrory supports the recently enacted Florida law that restricts discussion of sexual orientation in schools. He said that he had been told before that he was the Ron DeSantis before Ron DeSantis.

But as he seeks the Senate nomination in Tuesday’s primary, he’s more interested in talking about inflation. He describes himself as a Ronald Reagan Republican who’s interested in national defense, fighting crime, cutting taxes and balancing budgets.

He also described himself as the Jason Bourne of the Republican Party. “I’ve got these outside special interest groups trying to give me a false identity,” he said, taking particular issue with the Club for Growth’s attacks. “Who in the hell are they to determine what type of conservative I am?”

Carter Wrenn, a longtime Republican strategist in North Carolina, said the Club for Growth’s spending might be the biggest factor in the Senate race, and he agreed with McCrory that the top issue for voters was inflation.

Wrenn said he didn’t think transgender rights were a major issue in the primary because the top candidates most likely agree with McCrory’s actions in 2016.

“Obviously none of his opponents are attacking him for it in the primary,” Wrenn said, “because if you attack Pat for what he did in the past, it would probably help him.”

Is there anything you think we’re missing? Anything you want to see more of? We’d love to hear from you. Email us at onpolitics@nytimes.com.