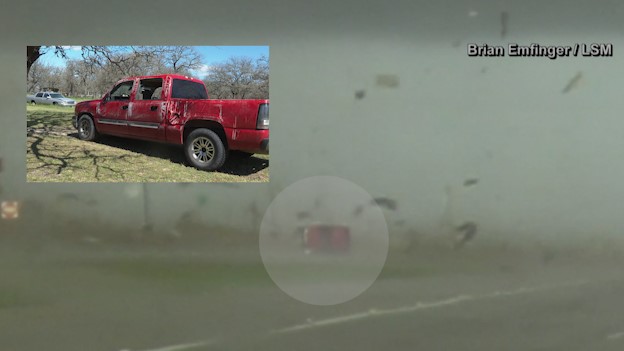 ELGIN, Texas (KXAN) — “He was in shock; he was crying,” said Ruben Briones, who said he helped the driver of the red pickup truck seen flipping over on Highway 290 in Elgin in a widely-circulated video.

“He told me it was scary,” said Briones, who added the driver is from Manor but is leaving the truck in Elgin near where the tornado touched down for the time being.

The video of the truck driving through the tornado has gone viral. Hundreds of thousands have seen it across the world.

That includes Elgin resident Keith Leschber. He also happens to drive a red pickup truck. It was parked safely at home when the tornado hit, but when his friends saw the video — they got worried.

The driver of the red truck in the viral video only has minor injuries.

“He had a scrape or some cuts on his left arm,” said Commander Aaron Crim with the Elgin Police Department.

Below are pictures of what the truck looks like now.

The windows are blown out. The side panels are dented and scraped. The rear view mirrors are gone.

Commander Crim said he spoke with the driver on the side of the road shortly after the tornado hit.

“I asked if he was okay, and he shook his head and didn’t really answer me,” he said. At that point, Crim had not seen the video yet.

“Now I understand why he had a blind stare. I’m sure he was scared to death,” he said. Crim said a woman who identified herself as an off-duty EMT had wrapped the driver’s arm in a bandage.

We’re still working to track down the driver himself. Police said they believe he’s in his late teens or 20s.