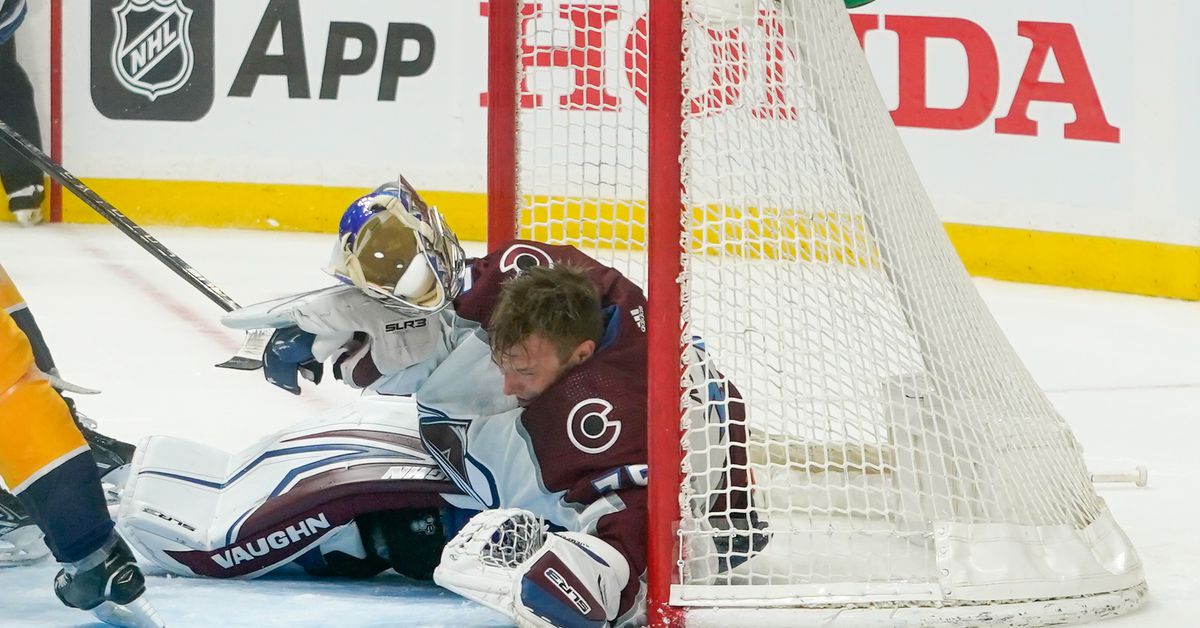 Now that the series shifted to Music City the Colorado Avalanche needed to keep their momentum going in hopes of ending the Nashville Predators’ season early. After a tense second period the Avalanche did that taking this Game 3 decisively with a 7-3 score and now hold a 3-0 series lead.

It was a tough start for Colorado as Nashville were determined to make the best of their home ice advantage and put pressure on the visiting Avalanche. Despite this, Nico Sturm was all over the predators, creating a scoring chance for Colorado that ultimately came to nothing. When Predators’ Eeli Tolvanen took a tripping penalty against Darren Helm, the Avalanche were able to up their intensity and capitalize the man advantage. With 41 seconds left in the power play, Artturi Lehkonen tipped in a shot from Toews to get the Avalanche on the board at 10:45.

A second power play led to a Nathan MacKinnon goal with Gabriel Landeskog and Cale Makar picking up the assists. It’s worth noting that Nathan Mackinnon has at least one goal in all three games in this series. Talking of players who have scored in every game, 90 seconds later the Predators answered with a goal from Matt Duchene. The Avalanche looked to be wrapping up a positive first period when Darcy Kuemper took a stick to the face. It is unclear exactly what happened, but it appears that Ryan Johansen’s stick got through his mask and injured his right eye. Kuemper had to leave the ice, replaced by Pavel Francouz who was able to make a crucial save as time expired.

The second period kicked off with a worrying start for the Avalanche as Eeli Tolvanen scored five minutes in, evening up the score. Once Colorado found their stride they began to put pressure on Nashville goaltender Connor Ingram, forcing him to make several consecutive saves. Gabriel Landeskog picked up the rebound and scored, putting the Avalanche back in the lead. Two minutes later Nashville evened up the score once again with a goal from Roman Josi. It seemed like this period would be defined by the lead changing hands between the two teams as Gabriel Landeskog got his second goal to capture the lead from Nashville.

Fortunately for Colorado this was not the case, with Nazem Kadri scoring an unassisted goal at 14:41, giving the Avalanche a needed two goal lead. The Predators were clearly feeling the pressure by this point. In frustration, Filip Forsberg picked up a charging penalty for a big hit on Logan O’Connor which saw most of the players getting involved. There were sticks all over the ice and Cale Makar’s helmet managed to get loose.

The third period was a lot quieter for both teams as the intensity seemed to drop. Colorado played a steady game to maintain their lead, not needing to push too much. Once again the half-way point of the period saw some changes. Devon Toews, who had been given the goal in the first before it was credited to Lehkonen, put in a shot as the Predators were changing. Makar and Landeskog picked up the assists. With an empty net for Nashville, Valeri Nichushkin scored Colorado’s fourth straight goal, giving the Avalanche a 7-3 victory over the Predators.

We knew this had the potential to be a tough game. Nashville needed the win and so their intensity at the start of each period was unsurprising. The Avalanche have once again demonstrated why they are one of the best, if not the best team in the NHL, adapting to the loss of their goalie and picking up the pace when needed. Pavel Francouz deserves credit for coming in at the end of an intense first period to keep the Avalanche in the game.

Nashville are definitely feeling the pressure. The next game is critical for them; if they lose, they will be out of the playoffs. Colorado is in a much better position, having the chance to clinch a spot in the second round and sweep the Predators with a fourth straight win. I expect the intensity to increase as Nashville fights for their spot, and wouldn’t be surprised if we see even more penalties and big hits. Colorado’s power play was excellent, going four for five. If they can keep it up Nashville will have a tough time stopping them scoring and will need to try and strike the balance between keeping their intensity high and not getting called for too many penalties.

Darcy Kuemper was assessed and he doesn’t have a concussion which is a relief, it’s unlikely that this will be a long-term injury, so we could see him back for the fourth game in the series. If not, we’re sure that Francouz will be ready.

Colorado are set for another game in Nashville on Monday at 7:30 pm MT.