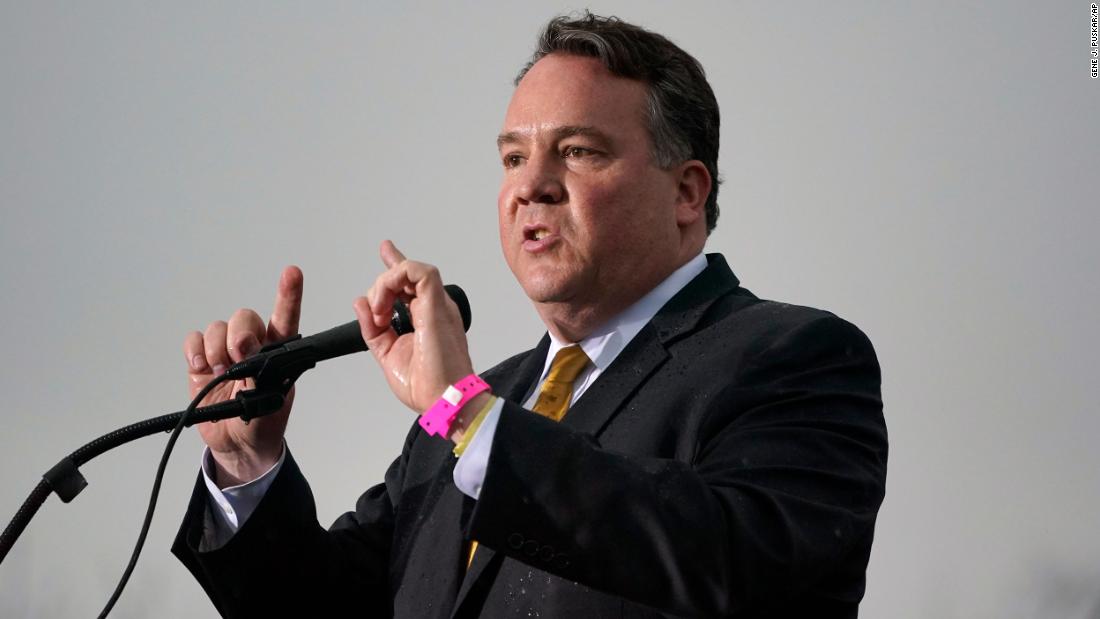 The contest marked just the latest phase of the fight for dominance of the Republican Party, which is also unfolding Tuesday in the Nebraska gubernatorial primary, where Trump has backed a candidate facing allegations of sexual misconduct.
Trump’s influence is felt throughout May’s GOP primaries as candidates clamor for his support, especially after his pick won in the Ohio Senate race last week. The candidates he’s backed in Tuesday’s marquee contests have stood beside him throughout his baseless campaign to raise doubts about the 2020 presidential election.
West Virginia, a state Trump has twice won overwhelmingly, tested the significance of his support. Mooney had won Trump’s endorsement in part because he objected to the Pennsylvania electoral count as Congress was certifying Joe Biden’s 2020 victory.

Speaking on Tuesday night, Mooney touted the importance of the former President’s endorsement and said he might have to interrupt his victory speech at any moment to take a call from Trump.

Mooney teased a potential bid for US Senate against Manchin, who’s facing reelection in 2024. “This is the second time Joe Manchin has done a TV ad attacking me. I’m 2-for-0 against him. Maybe I should make it 3 -and-0,” he said to cheers.

McKinley had voted to certify Biden’s win and had backed the formation of an independent commission to investigate the January 6, 2021, insurrection — an effort that was ultimately spiked in the Senate but nonetheless earned Trump’s wrath. He also supported the $1.2 trillion bipartisan infrastructure law, which Trump railed against.

Mooney, who was first elected to the House in 2014, had attacked McKinley as “a liberal” for supporting that bipartisan legislation, but there was no subtlety in his ads as he touted the former President’s endorsement.

One of them framed as a “MAGA Alert” accused McKinley of supporting “(House Speaker Nancy) Pelosi’s anti-Trump, January 6th witch hunt.” And a radio ad running throughout the district in the closing days featured Trump calling Mooney “a warrior.”

Mooney described his victory on Tuesday as a win against Pelosi and government officials who he said had overreached with mask and Covid-19 protocols.

Besides Manchin, who had praised McKinley for opposing “reckless spending” that could harm the people of his state, the congressman had the backing of Republican Gov. Jim Justice, a former Democrat who switched his party registration to the GOP in 2017.

McKinley had attacked Mooney as a newcomer to the state who did not grasp the depth of its concerns, drawing attention to the fact that Mooney had moved to the state in the last decade from Maryland, where he had chaired the state GOP.

Manchin alluded to that carpetbagger attack in the ad, stating that Mooney and his “out-of-state supporters” were spreading the “outright lie” that McKinley supported Biden’s Build Back Better plan, which Manchin had killed, citing concerns about the inflation and spending.

“Alex Mooney has proven he’s all about Alex Mooney. But West Virginians know David McKinley is all about us,” Manchin said in the ad.

In Nebraska, Trump has endorsed Charles Herbster, a businessman, farmer and rancher who is in a tight three-way race against hog farmer and University of Nebraska Board of Regents member Jim Pillen and state Sen. Brett Lindstrom.

While Trump won the state with 58% of the vote to Biden’s 39% in 2020, Republican Gov. Pete Ricketts has endorsed Pillen as the candidate who should succeed him and has actively campaigned against Herbster, whom he has described as being unqualified for the job. Recent interviews in the state suggest that the popular governor’s backing could carry as much, if not more, weight for many of the state’s GOP voters than Trump’s endorsement.
Herbster has been contending with the fallout from a mid-April report in the Nebraska Examiner detailing the accounts of seven women who said they were groped by him at political events or beauty pageants, and an additional woman who accused him of kissing her forcibly. The Examiner said that all eight accounts were corroborated either by witnesses or people who spoke to the women about what happened immediately afterward.
Herbster dismissed the allegations in an interview with CNN as a “politically timed smear” and said they were “100% false.” Adopting the aggressive tactics that Trump championed during his own controversies, Herbster sued his first named accuser, Republican state Sen. Julie Slama, who said Herbster sexually assaulted her by reaching up her skirt and touching her without consent at a 2019 GOP dinner. In the lawsuit, he alleged that his statements have done “grievous harm to his reputation” and she filed a countersuit.

As part of his defense, Herbster claimed that his opponents were using the same playbook that they used against Trump in the 2016 campaign and then-Supreme Court nominee Brett Kavanaugh in 2018. Both men were accused of sexual assault — allegations they denied.

Trump defended Herbster at a rally in Nebraska earlier this month, claiming that he was a “fine man” who “had been badly maligned.”