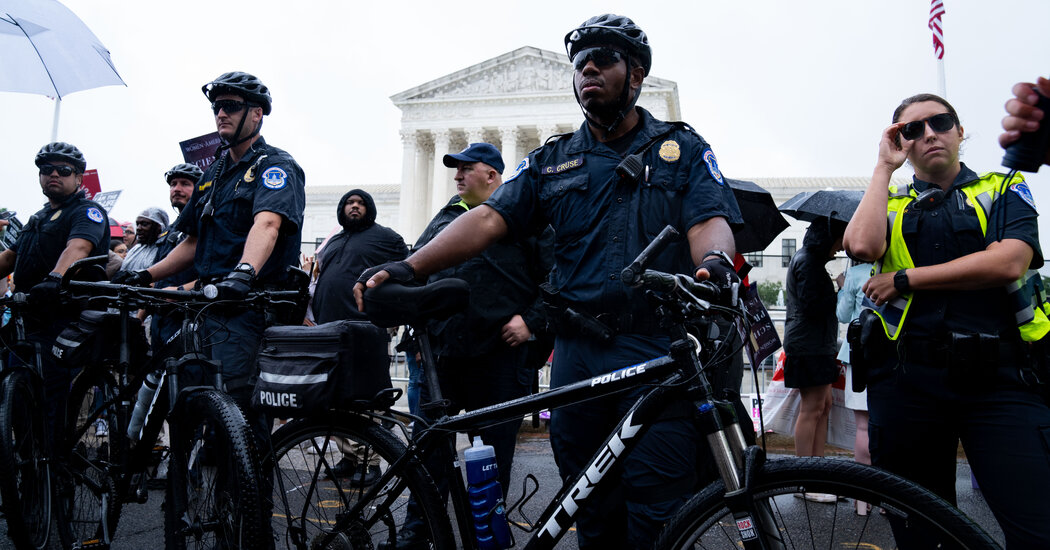 WASHINGTON — The Supreme Court ruled on Thursday that police officers may not be sued under a federal civil rights law for failing to administer the familiar warning required by the court’s 1966 decision in Miranda v. Arizona. The vote was 6 to 3, with the justices dividing along ideological lines.

In a second case, the court ruled that a death row inmate in Georgia could invoke the same civil rights law in seeking to be executed by firing squad rather than lethal injection. The vote was 5 to 4, with Chief Justice John G. Roberts Jr. and Justice Brett M. Kavanaugh joining the court’s three liberal members to form a majority.

The case on Miranda warnings illustrated the contested status of the decision. Writing for the majority, Justice Samuel A. Alito Jr. said the ruling had announced something less than a constitutional right.

The case, Vega c. Tekoh, No. 21-499, was brought by Terence B. Tekoh, a hospital attendant who was accused of sexually abusing an immobilized patient receiving an emergency MRI scan. Mr. Tekoh was questioned at length by Carlos Vega, a deputy sheriff in Los Angeles.

The two men offered differing accounts of the nature of the questioning, but there was no dispute that Mr. Vega did not give the Miranda warning, that Mr. Tekoh signed a confession admitting to the assault, that a state trial judge admitted his confession into evidence or that a jury acquitted him.

Mr. Tekoh then filed a lawsuit against Mr. Vega under the civil rights law, known as Section 1983, which allows citizens to sue state officials, including police officers, over violations of constitutional rights.

Justice Alito wrote that the remedy for a violation of the Miranda decision was exclusion of defendants’ statements at their criminal trials. The decision, he wrote, had not established the sort of constitutional right that could be vindicated by a lawsuit under Section 1983.

“Miranda rests on a pragmatic judgment about what is needed to stop the violation at trial of the Fifth Amendment right against compelled self-incrimination,” Justice Alito wrote. “That prophylactic purpose is served by the suppression at trial of statements obtained in violation of Miranda.”

He added: “Allowing the victim of a Miranda violation to sue a police officer for damages under Section 1983 would have little additional deterrent value, and permitting such claims would cause many problems.”

In dissent, Justice Elena Kagan wrote that the Supreme Court had repeatedly and emphatically said Miranda had established a constitutional right. That meant, she wrote, that officials violating it must be subject to laws under Section 1983.

“Today,” she wrote, “the court strips individuals of the ability to seek a remedy for violations of the right recognized in Miranda. The majority observes that defendants may still seek ‘the suppression at trial of statements obtained’ in violation of Miranda’s procedures.”

“But sometimes,” Justice Kagan continued, “such a statement will not be suppressed. And sometimes, as a result, a defendant will be wrongly convicted and spend years in prison. He may succeed, on appeal or in habeas, in getting the conviction reversed. But then, what remedy does he have for all the harm he has suffered?”

Justice Kagan wrote the majority opinion in a second decision on suits under the civil rights law, this one about whether a death row inmate in Georgia could sue officials there over how he was to be executed.

The inmate, Michael Nance, argued that his constitutional right to be spared cruel and unusual punishment under the Eighth Amendment would be violated were he to be put to death by lethal injection because his veins were compromised.

Supreme Court precedents require inmates objecting to methods of execution to identify an alternative. Mr. Nance proposed a firing squad, a method approved in four states but not Georgia. He said officials in Georgia could adapt one of those other states’ protocols.

The question in the case, Nance v. Ward, No. 21-439, was whether Mr. Nance could sue under the civil rights law. Justice Kagan said yes.

“The prisoner is not challenging the death sentence itself; he is taking the validity of that award as a given,” she wrote. “And he is providing the state with a veritable blueprint for carrying the death sentence out. If the inmate obtains his requested relief, it is because he has persuaded a court that the state could readily use his proposal to execute him.”

In dissent, Justice Barrett wrote that Mr. Nance was required to file a habeas corpus challenge and could not use the civil rights law because, as a practical matter, he was seeking to thwart his execution entirely.

“The court is looking too far down the road,” she wrote, suggesting that Georgia’s potential adoption of the firing squad was speculation. “In my view, the consequence of the relief that a prisoner seeks depends on state law as it currently exists.”