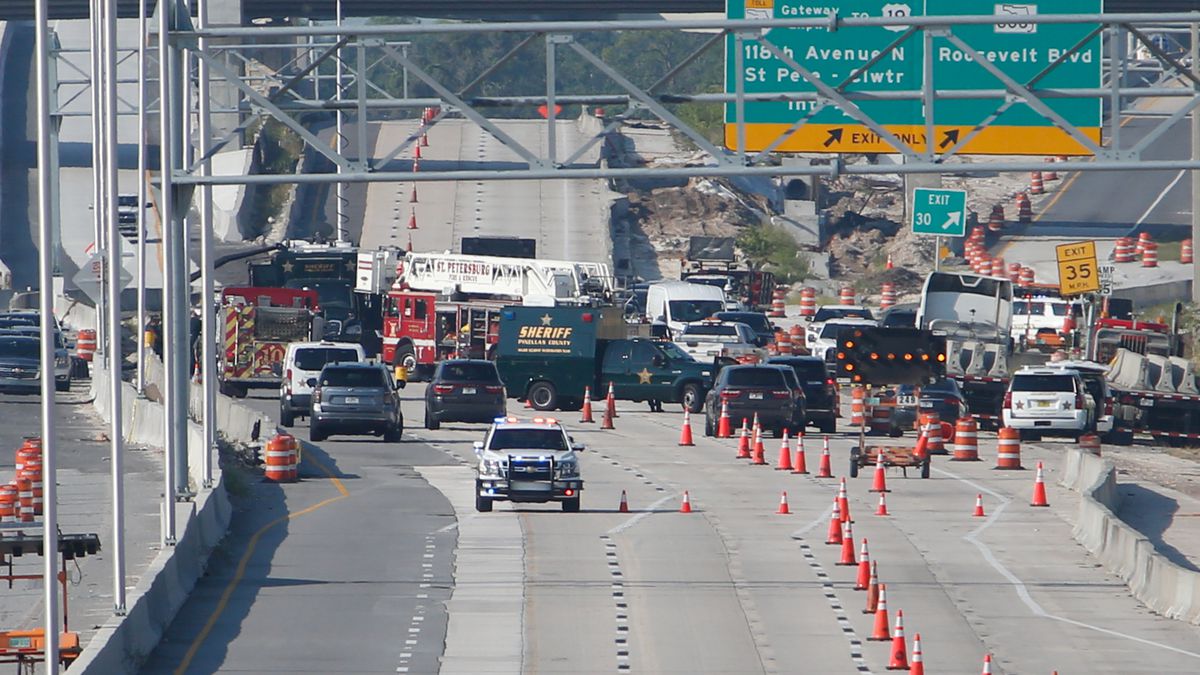 ST. PETERSBURG — A Pinellas deputy was hit and killed by one of the construction workers he had been assigned to protect during a Thursday night shift, setting off a nine-hour manhunt that ended Friday with the suspect’s capture, Pinellas Sheriff Bob Gualtieri said.

The crash happened near Roosevelt Boulevard after Deputy Michael Hartwick, 51, started his shift at about 10:30 pm Thursday, Gualtieri said at a news conference Friday morning.

Hartwick was working a traffic detail to provide safety for road construction crews who were working on Interstate 275 overnight, Gualtieri said. Hartwick blocked the two inside southbound lanes of the interstate, got out of his patrol cruiser and was standing on the shoulder facing north when Juan Ariel Molina-Salles, 32, a construction worker who was operating a front-end loader, struck him, Gualtieri said.

Gualtieri initially provided a different name for Molina-Salles, but at a second news conference Friday afternoon, he said investigators were given false information from workers at the scene.

The forklift was moving about 20 mph when it hit Hartwick, killing him instantly, Gualtieri said.

Molina-Salles continued for about a mile after hitting the deputy, then stopped in a parking lot and told another construction worker that he had killed a deputy, according to the sheriff. That worker took Molina-Salles’ construction gear and hid it in a wooded area. Molina-Salles took off running, Gualtieri said.

Law enforcement across the area spent Friday morning searching for Molina-Salles, using three helicopters and K9 units—including bloodhound dogs from the Pasco County Sheriff’s Office that used Molina-Salles’ gear to pick up his scent and take him into custody by about 8 :40 am Friday. He was expected to be booked into the Pinellas County Jail on Friday on a charge of leaving the scene of a crash involving death, a first-degree felony that carries a maximum prison sentence of 30 years.

Molina-Salles is from Honduras and is an undocumented immigrant who told investigators he has been in the Tampa Bay area since March, Gualtieri said. His last known address is in Tampa.

Gomez-Zelaya also is from Honduras and is an undocumented immigrant, Gualtieri said. He will be charged with being an accessory after the fact, a felony.

“They were hindering the investigation, not giving us answers to the questions that we needed,” Gualtieri said.

You’ll receive updates on major issues and events in Tampa Bay and beyond as they happen.

You’re all signed up!

Want more of our free, weekly newsletters in your inbox? Let’s get started.

Explore all your options

The sheriff said Molina-Salles does not have a driver’s license and gave his employer a fake identification card from North Carolina. He said he told his employer that he knew how to operate the front end loader from his construction experience back in Honduras, according to Gualtieri.

Gualtieri said the men work for Archer Western Construction. The Tampa-based firm is among the contractors hired by the Florida Department of Transportation to replace the Howard Frankland Bridge.

A representative of the company and a spokesperson for the state transportation department did not immediately respond to messages Friday afternoon.

“All I can say is, here we go again,” Gualtieri said at the first news conference Friday. “This is 18 months after Deputy Magli was killed. Now we go 110 years in the Pinellas County Sheriff’s Office without any line of duty deaths, and now we have two in 18 months.”

Deputy Michael J. Magli, 30, was killed in the line of duty on Feb. 17, 2021. The 30-year-old deputy, husband and father of two was killed attempting to stop a drunken driver fleeing from other deputies.

Robert Allen Holzaepfel, 35, was sentenced this month to 35 years in prison after he pleaded guilty to third-degree murder, DUI manslaughter and a felony charge of driving while his license was suspended or revoked.

Hartwick was a deputy with the Sheriff’s Office for 19 years, Gualtieri said.

Hartwick has two adult sons who were notified of Hartwick’s death, as was his mother, Gualtieri said.

The Sheriff’s Office will escort the deputy’s body from the medical examiner’s office to the Thomas B. Dobies Funeral Home in Tarpon Springs, starting at 3:30 pm Friday.

Outside of work, Hartwick loved to ride his motorcycle and was the road captain for the Indian Motorcycle Riders Group, Skyway Chapter, 1982 in St. Petersburg.

Hartwick was an excellent planner and liked introducing the group to new restaurants on their rides, said 61-year-old Ron Herman, a member of the club.

“He used to always joke and say we were a riding group with an eating problem because he knew the places to go and eat,” Herman said.

Hartwick liked to ride in Pasco and Hernando counties and enjoyed the camaraderie of the group, said Jim Masterson, who met Hartwick through the club about two years ago.

“He was very inviting and inclusive, very open,” said Masterson, 57, adding that Hartwick had a great sense of humor.

“He was very interested in how everyone was doing and what was happening in our lives, and he was good about sharing what was going on with his,” Masterson said. “And he was just a good friend.”

This is a developing story. Stay with tampabay.com for updates.