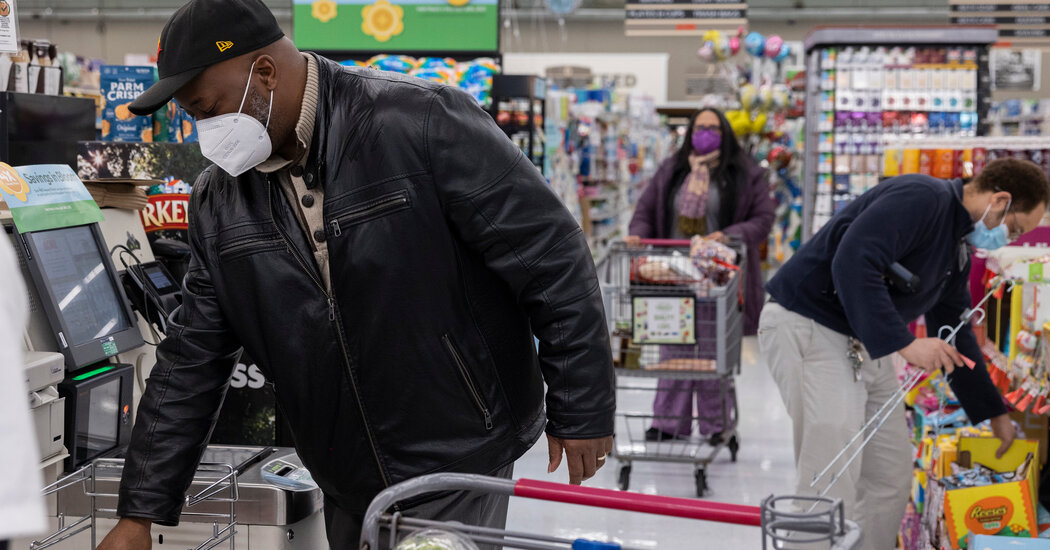 PHILADELPHIA — Amid the jumble of warnings, rules and edicts on the counter of the H20 Laundromat — “No Cash,” “Watch Your Step,” “Not Responsible” — there was a new one on Monday morning, prominently displayed. “Masks required for everyone,” it said, “effective April 18.”

The owner, Chris Lee, had tapped it there over the weekend though the new rule was not his. It was the city’s. Starting on Monday, the Philadelphia health commissioner announced last week, everyone in the city would be required to wear masks in indoor public places, except in businesses where proof of vaccination was checked upon entry.

Over the past month and a half, a number of cities, including Philadelphia, lifted mask mandates that had been in place for some of the deadliest months of the Covid-19 pandemic, signaling that a return to normalcy was perhaps, once again, near . But another oddly named subvariant soon arrived, and infections began heading upward again. With a low but quickly climbing case count, Philadelphia became the first major American city this spring to order its residents to put the masks back on.

The decision comes at an uncertain time in the pandemic, as new variants of unknown risk show up while the wide availability of home tests has complicated official tallies of new infections. The Omicron subvariant known as BA.2 reversed a nationwide decline in new cases, but it is spreading in a country that is better vaccinated than when the Delta variant arrived last year. There are good antiviral medication options now. And so far, a spike in hospitalizations has not followed the spike in infections.

At the same time, many people, even some of the most cautious, have lost their appetite for vigilance, and rules have grown harder to keep track of. Seeking to forestall a new surge, the Biden administration extended the federal mask mandate on public transportation for two more weeks, but a federal judge in Florida vacated the mandate on Monday. Theaters on Broadway recently dropped proof-of-vaccination rules but extended mask requirements at the end of May.

As cases tick up, local and state leaders across the country will have to decide if a point comes when recommendations are no longer enough and policies like mask mandates are again called for.

“From the kind of larger public health perspective, this is a constant dance that we are in, especially here in the United States, of when to put things into policy,” said Dr. Megan Ranney, an emergency physician and academic dean of the Brown University School of Public Health.

For Philadelphia’s health department, that point was reached last week, when a rising number of cases automatically triggered the mask mandate. The city of 1.6 million people has been broadly compliant with public health directives for the past two years, and masking was widespread even without a mandate. Still, the reversal presents a case study for other cities, a test of how thin patience may have worn for pandemic restrictions, even in a place where thousands of people have died from Covid-19.

“I think it’s overcautious, but I see where they are coming from,” said Mike Levay, 25, a digital properties manager in Philadelphia who was walking through the city’s main Amtrak station on Monday morning. He thought it was a little confusing to keep going back and forth on the mandates. But, he added, “I understand it and respect it.”

Most Philadelphians interviewed on Monday accepted the mandate, a number even applauding it. But this was not unanimous. Some restaurant owners saw the mandate as yet another reason for customers to stay home in a brutal two years for the food service business — “another bump in a series of stops and starts,” one said.

Others dismissed these concerns. “In restaurants, all you have to do is wear it to the door,” said Ilene Winikur, 81, who said she was proud of her city for issuing the mandate. “The minute they put water on your table, the mask is off.”

A group of businesses owners and residents on Saturday sued to stop the mandate. The mayor, Jim Kenney, defended the city’s decision-making as “clear, transparent and predictable,” while the state’s leading Democratic candidate for governor, Josh Shapiro, called such mandates “counterproductive.”

The range of opinions at the H20 Laundromat contained multitudes.

“A lot of people thought you had to wear it anyway,” said Ashley Thurston, 31, a corrections officer wearing a rhinestone-sparkled face mask while folding children’s clothes.

“If I’m vaccinated, why do I have to wear a mask?” smoked Myesha Romero, 31, whose disorder was hardly concealed beneath a red mask with the Temple University logo. “What’s the damn point?” she asked. “Every day it’s a new rule.” Coretta Nesmith, 32, sitting maskless in a row of seats at the other end of the laundromat from the counter, smiled broadly. “You can tell my view,” she said.

Statistics released by the city on Monday pointed to an outbreak that was still small but quickly growing. The average number of newly reported cases was 224 a day, a relatively tiny figure for a large city, but a 240 percent increase over two weeks. Eighty-two people were hospitalized with Covid-19, nearly double last Monday’s number. But the death toll, which typically lags weeks behind case and hospitalization totals, had not ticked up so dramatically in the weeks since it had reached the horrific number of 5,000.

In the low but rapidly rising numbers, the city’s health officials saw a familiar warning.

“I remember seeing that when Delta was on the horizon,” Dr. Cheryl Bettigole, the city’s health commissioner, said in an interview, describing the ominous days last year when Philadelphians were finally enjoying a respite from Covid-19 while she and her colleagues watched a new variant wreaking death and illness in Europe. “It was hard to get people to pay attention,” she said.

When Dr. Bettigole and other health officials began assembling a series of metrics that would determine which mitigation policies should be in place at which times, the experience of Delta was on her mind, she said. So they decided that a 50 percent jump in daily infection counts over 10 days — what she called “the most reliable measure we’ve seen in previous waves” — plus a rise in the absolute number of infections over 100 or hospitalizations over 50 would automatically trigger an indoor mask mandate.

As critics of the order are quick to point out, Philadelphia’s guidelines differ from those of the federal Centers for Disease Control and Prevention. The latest CDC guidelines place more emphasis on hospital admissions and occupied hospital beds, which are measures of the strain on health care systems rather than direct gauges of infection risk; like deaths, those metrics tend to lag several weeks behind the trend in new cases. By the CDC’s definition, Philadelphia was still solidly in the “low” category when the mask mandate was reinstated.

“What is the argument to go against the CDC, to go against Dr. Fauci?” asked Allan Domb, a real estate mogul who sits on the Philadelphia City Council. “This is hard to understand when all these other institutions are saying it’s not necessary.”

Dr. Bettigole acknowledged the divergence, but insisted that the decisions were being made based on the specific conditions in Philadelphia, a city with a large population in poverty and one where Black communities have been particularly hard hit by the virus.

“We have to be focused on protecting the people in the city who are the most vulnerable,” she said. With all the unknowns of epidemiology and human behavior, fighting the virus calls for making the best-informed effort, she explained, and adjusting if those efforts should fall short.

“The thing is, I could be wrong — people two weeks from now could be laughing at me,” she said. “But if I manage to save lives because I’m right, that’s worth the risk.”