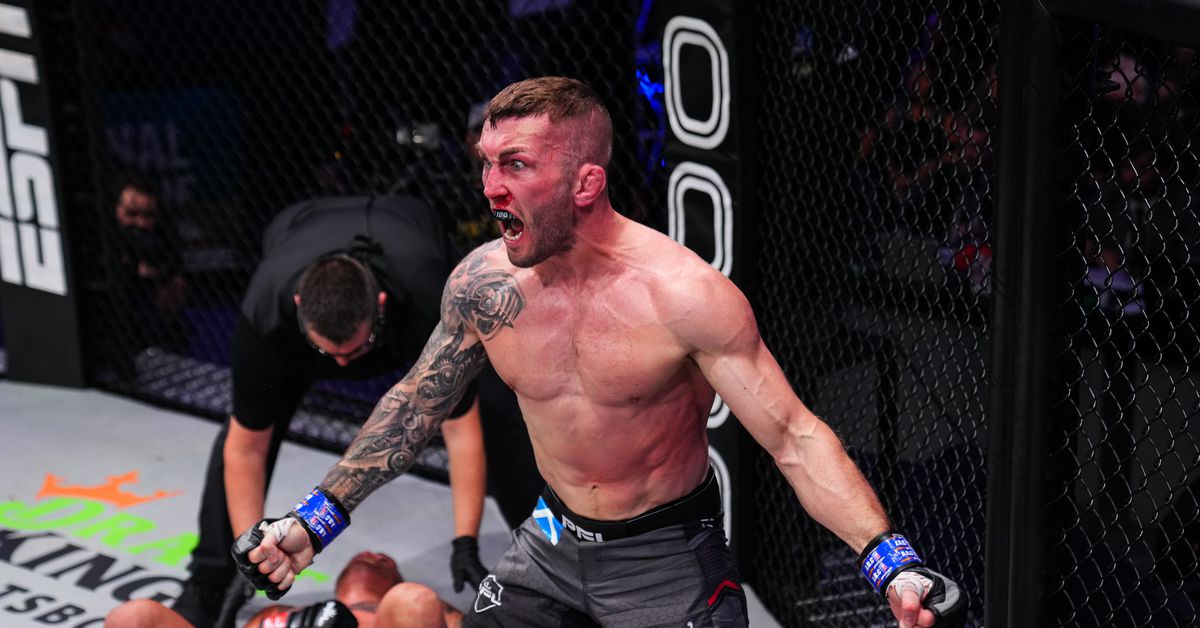 It was a night of upsets Friday evening in Atlanta with for 2021 heavyweight champion Bruno Cappelozza coming up short against Mattheus Scheffel and Anthony Pettis tapped by a crazy submission at PFL 5.

Scheffel came into the main event as a substantial underdog, having been knocked out in his PFL debut back in April. But “Buffa” delivered one of the best performances of his career, out-gunning Cappelozza in a three-round war. Cappelozza and Scheffel spent almost the entirety of the fight on the feet with each man having their moments, but it was the power and volume of Scheffel that carried the day as he rocked the former champion in the first round and outworked him for the remainder of the bout to earn 29-28 scorecards from all three judges.

Unfortunately for Scheffel, he may have just beaten the former champion, but it wasn’t enough to punch his ticket to the heavyweight playoffs. Instead, Cappelozza, by virtue of scoring a first-round KO in his bout with Stuart Austin at PFL 2, clinched the No. 4 seed and will take on Denis Goltsov in the heavyweight semifinals later this year.

The upsets continued in the co-main event with Stevie Ray securing the biggest win of his career. The UFC and PFL vet submitted Anthony Pettis in the second round with a modified twister – called a “modified body lock” by the broadcast team – to secure his spot in the lightweight playoffs.

After a back-and-forth first round, Ray was able to reverse a takedown attempt from Pettis in the second and take the back, locking in a body triangle. When Pettis attempted to scramble out of it, he got caught in a spine crank and Ray forced a tap out, with Pettis writhing in pain afterward. The win earned Ray five points, enough to sneak in to the No. 4 seed for the lightweight tournament where he will face Pettis yet again – if Pettis is able to compete.

Klidson Abreu came into the evening needing a big performance to make it into the heavyweight playoffs, and while he did dominate Renan Ferreira, it wasn’t enough to make it into the semifinals. Abreu smothered Ferreria with relentless takedowns and ground-and-pound, but as he was unable to secure a finish, Abreu only earn three points, bringing his season score to six. Unfortunately for Abreu, Ferreria also has six points but his came by virtue of a first-round submission, and the way the PFL rules are structured, that gives Ferreria the advantage, even over the man who dominated him. As a result, Abreu slots in as the first alternate for the heavyweight semifinals, while Ferreria will take on Ante Delija.

Chris Wade put a stamp on the final regular season featherweight bout of 2022, knocking out Kyle Bochniak with a head kick and follow up punches in the first round. Wade threw a head kick early in the first round, dropping Bochniak to his knees and Wade did not miss his opportunity, jumping on his rocked foe and hammering him with punches until the referee intervened. The stoppage came just 70 seconds into the bout and clinched the top overall seed for Wade. He will now face Brendan Loughnane in the first round of the playoffs.

Ante Delija secured a spot in the PFL playoffs with an uninspired win over Shelton Graves in a main card heavyweight bout. The 2021 heavyweight runner-up, failed to make much of an impression in his playoff-clinching win, outworking Graves over the three rounds. The biggest moment of the fight was arguably a clash of heads that split Delija’s nose and earned Graves a point deduction, resulting in scores of 29-27 for Delija across the board. Delija will face Renan Ferreria in the first round of the semifinals.

Bubba Jenkins managed to secure entry to his second consecutive PFL playoffs, dominating Reinaldo Ekson with his superior wrestling en route to sweeping the scorecards with three 30-27s. Jenkins showed off an improved striking game in spurts, but mostly used his wrestling pedigree to repeatedly take Ekson down, securing a couple of good slams in the process. Jenkins will next face Ryoji Kudo in the semifinals of the featherweight tournament.

In the main card opener, Denis Goltsov punched his ticket to the heavyweight playoffs with a suffocating performance against Maurice Greene. Greene simply had no answer for the wrestling and grappling of Goltsov, who repeatedly scored takedowns and threatened with submissions from top position. In the end, Goltsov swept the scorecards, taking three 30-27s, and, with 9 points, will move on to the PFL heavyweight semifinals, where he will face 2021 champion Bruno Cappelozza.

In the opening two ends of the evening, Brendan Loughnane and Ryoji Kudo locked in their spots for the featherweight playoffs, with Kudo knocking out Alejandro Flores in the first round to earn six points, and Loughnane taking a hard-fought unanimous decision over late- replacement Ago Huskic. Loughnane enters the playoffs as the No. 4 seed, while Kudo, by virtue of his first-round finish, enters as the No. 2 seed.

Check out the full PFL 5 results below.