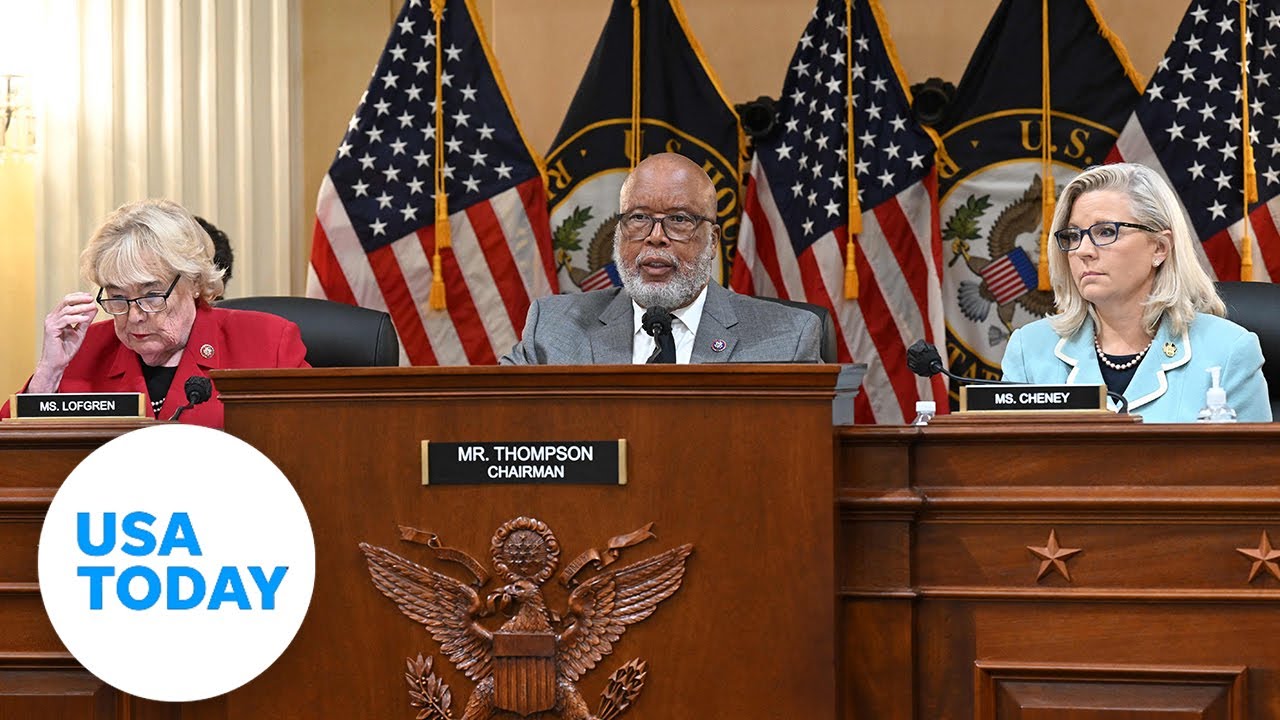 WASHINGTON – Former Vice President Mike Pence’s refusal to single-handedly reject electoral votes on Jan. 6, 2021, as former President Donald Trump pressured him to do, will be the subject of the Thursday House hearing investigating the Capitol attack.

What to expect out of today’s hearing:Trump raised millions to fight election fraud before Jan. 6. Here’s how that money was spent.

The 1887 statute sets the rules for how Congress counts votes in presidential elections. Jacob told the committee during his deposition Eastman conceded his argument was contrary to historical practice, would likely be rejected unanimously by the Supreme Court and violated the Electoral Count Act in four ways.

Former President Donald Trump held an Oval Office meeting Jan. 4 to pressure Pence, but the vice president refused to buckle. Committee investigators asked if Eastman ever acknowledged in front of Trump that his proposal would violate the law.

“I believe he did on the Fourth,” Jacob said in a videotaped deposition played Thursday.

Rep. Pete Aguilar: Trump knew there was violence at the Capitol when he tweeted at Pence

“You’ll also hear President Trump knew there was a violent mob at the Capitol when he tweeted at 2:24 p.m. that the Vice President did not have the quote, courage to do what needed to be done.” Trump tweeted then that Pence lacked the courage to “do what should have been done and protect our country and constitution.”

“Let me be clear,” said Aguilar. “Vice President Pence did the right thing that day. He stayed true to his oath to protect and defend the constitution.”

Rep. Pete Aguilar: Trump “latched on to a dangerous theory and would not let go”

In his opening statement of the hearing, Rep. Pete Aguilar, D-Calif., said that January 6th was not an isolated incident, that for weeks leading up to the attack Trump committed “illegal scheme and deception.”

Aguilar said the committee’s evidence proves that Trump knew he lost the election and then attempted to circumvent “the country’s most fundamental civic tradition: the peaceful transition of power.”

“The president latched on to a dangerous theory and would not let go because he was convinced it would keep him in office,” Aguilar said.

Vice President Mike Pence’s Chief of Staff told the committee that Pence had communicated directly to Trump that he did not have the legal or constitutional authority to reject electoral votes and thereby hand Trump the presidency.

Marc Short said in a videotaped interview with the committee that Pence had not only written a letter to Trump saying he had no such legal authority, but communicated the same thing to Trump “many times” and “very consistently.”

The committee played chilling videos of Jan. 6 rioters threatening Mike Pence when they learned he had refused to throw out electoral votes – a demand made by their patron, Donald Trump.

“I’m hearing reports that Pence caved!” one rioter said during a profane rant.

“Donald Trump wanted Mike Pence to do something no other vice president has ever done. The former president wanted Pence to reject the votes and either declare Trump the winner or send the votes back to the states to be counted again.

“Mike Pence said no. He resisted the pressure. He knew it was wrong. We are fortunate for Mr. Pence’s courage.”

Thompson added: “When Mike Pence made it clear that he wouldn’t give into Donald Trump’s scheme, Donald Trump turned the mob on him.”

The chairman, Rep. Bennie Thompson, D-Miss., told reporters Thursday the committee wants to question Ginni Thomas, the wife of Supreme Court Justice Clarence Thomas, over her contacts with a lawyer who developed a plan to overturn the 2020 election.

The committee had earlier discussed pursuing Ginni Thomas because of text exchanges with former White House chief of staff Mark Meadows about fighting results of the 2020 election.

But the committee recently obtained emails between Ginni Thomas and John Eastman, a lawyer for former President Donald Trump who developed the plan for Vice President Mike Pence to single-handedly tip the election in favor of Trump, according to The Washington Post.

“We think it’s time that we, at some point, invite her to come talk to the committee,” Thompson told reporters, according to Axios reporter Andrew Solender.

A fundraising committee affiliated with former President Donald Trump raised millions of dollars for an “Official Election Defense Fund,” but the Jan. 6 committee said in its hearing Monday that it found no evidence that fund existed.

Most of the money went to a leadership fund called Save America that gave millions to Trump allies. For example, nonprofits affiliated with advisor Kellyanne Conway and chief of staff Mark Meadows received $1 million each. Campaigns for candidates running to unseat Trump foes in Congress received $5,000 each.

E. Danya Perry, who served as an assistant U.S. Attorney in the Southern District of New York from 2002 to 2013, said the case has the building blocks of a “pretty clear cut” case of wire fraud, a subject that is “bread and butter for federal prosecutors.”

Where did Trump’s ‘Election Defense Fund’ money go?:Trump raised millions to fight election fraud before Jan. 6. Here’s how that money was spent.

A document allegedly given to Proud Boys Chairman Henry “Enrique” Tarrio prior to the Jan. 6 insurrection lays out detailed plans to occupy more than half a dozen buildings surrounding the U.S. Capitol and describes tactics to be used by occupiers as they “Storm the Winter Palace.”

The full document titled “1776 Returns,” attached as an exhibit in a court filing Wednesday by Tarrio’s co-defendant Zachary Rehl, was described by one former federal prosecutor as “an absolutely devastating piece of evidence.”

Patrick Cotter, a former federal prosecutor in Chicago who has practiced criminal law for 40 years, said the “1776 Returns” document is a bombshell for prosecutors, assuming it can be verified. “The authors are clearly planning multiple, multiple felonies; they’re saying how they’re going to do it, and it’s all in service, apparently, to a broader crime, which is the sedition.” he said.

Read more on the document here.

Pence in Cincinnati, Ohio, as Jan. 6 hearing focuses on him

Former Vice President Mike Pence will travel to Cincinnati on Thursday alongside Gov. Mike DeWine for a roundtable with members of Ohio’s natural gas and oil industry.

On the same day, the House Jan. 6 committee is expected to examine how former President Donald Trump pressured Pence to overturn the 2020 election.

The roundtable won’t be open to the public. It will be hosted by the Ohio Oil and Gas Energy Education Program. Pence will also be in town to raise money for Rep. Steve Chabot’s reelection campaign at the home of Nancy and David Aichholz, according to an invitation sent out by the GOP.

Pence in Ohio: Mike Pence in Cincinnati today as Jan. 6 committee looks at how Trump pressured him

What time is the Jan. 6 hearing on Thursday?

The hearing is scheduled to begin at 1 p.m. ET.

How to watch the Jan. 6 hearing

USA TODAY will livestream the hearings here on USATODAY.com. The hearings have also been televised on C-Span and cable news networks.

Trump lawyer: Pence was calm when told about lack of election fraud

Alex Cannon, a Trump campaign lawyer, described a stoic Vice President Mike Pence compared to other Trump aides in response to the lack of election fraud.

Cannon found no evidence of enough voter fraud to change the election. At one point during a November 2020 meeting at the White House, Pence asked Cannon for an update.

“I don’t remember his exact words, but he asked me if we were finding anything, and I said that I was not personally finding anything sufficient to alter the results of the election,” Cannon said. “He thanked me. That was our interaction.”

One Trump lawyer to another: Get a great criminal defense lawyer

In a promotional tweet Tuesday for the hearing, the committee released video of Eric Hershmann, one of Trump’s lawyers, who described warning Eastman the day after the riot he should find a “great” defense lawyer.

Eastman had contacted Hershmann to chat about Georgia election results because he couldn’t reach other Trump aides. Hershmann questioned Eastman’s sanity and told him the only phrase he wanted to hear from Eastman from then on was “orderly transition” to the Biden administration.

“Eventually he said, ‘Orderly transition,'” Hershmann said. “I said, ‘Good, John. Now I’m going to give you the best free legal advice you’re ever getting in your life. Get a great f-ing criminal defense lawyer. You’re going to need it.’ Then I hung up on him.”

How Trump’s PAC spent money:Trump raised millions to fight election fraud before Jan. 6. Here’s how that money was spent.

Greg Jacob, Pence’s counsel who researched the vice president’s power to reject electors when Congress counts presidential votes, told Eastman in an email Jan. 6, 2021, at 2:14 p.m. that his advice was “essentially entirely made up,” according to court records.

In an Oval Office meeting with Trump on Jan. 4, Pence stressed his “immediate instinct that there is no way that one person could be entrusted by the Framers to exercise that authority,” according to Jacob.

As the mob ransacked the Capitol two days later and Pence evacuated the Senate chamber, Jacob emailed Eastman to say “thanks to your bull—-, we are now under siege,” according to court records.

Who is Michael Luttig? Retired judge to testify

Eastman clerked for Michael Luttig, a retired judge for the 4th U.S. Circuit Court of Appeals who was rumored as a potential Supreme Court nominee during President George W. Bush’s administration.

Marc Short, Pence’s chief of staff, told the committee the vice president was proud of what was accomplished during the four years of the Trump administration, but sided with the Constitution in the election showdown.

“I think he was proud to have stood beside the president for all that has been done,” Short said in a videotaped deposition. “But I think he ultimately knew that his fidelity to the Constitution was his first and foremost oath.”