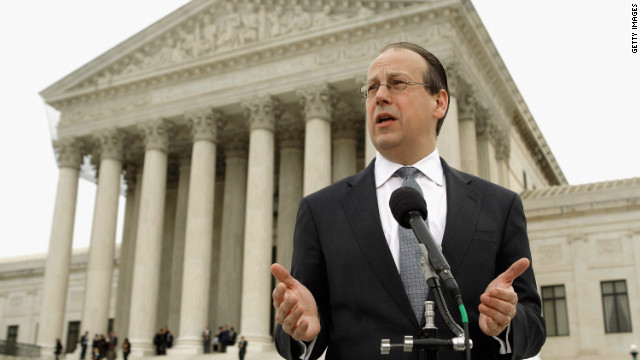 Hours later, he was no longer at his law firm.

After the Supreme Court ruled, Clement’s now-former law firm, Kirkland & Ellis, announced in a news release that it will “no longer represent clients with respect to matters involving the interpretation of the Second Amendment.”

The news will come as a surprise to the insular world of appellate litigation, where Clement is considered one of the best Supreme Court advocates in the country and Kirkland is a top law firm and breeding ground for appellate lawyers.

In a statement, Clement and Murphy said they’re starting a new firm.

“In light of Kirkland & Ellis’ announcement that the firm will no longer handle cases implicating the Second Amendment, including ongoing representations of individual plaintiffs we have maintained for years, we have decided to leave the firm and establish our own firm where we will continue to serve the full range of our diverse clients,” Murphy said.

“We do not take this step lightly. Kirkland is a storied firm, and we have many friends and valued colleagues there,” said Clement. “Unfortunately, we were given a stark choice: either withdraw from ongoing representations or withdraw from the firm.”

He added: “We could not abandon ongoing representations just because a client’s position is unpopular in some circles.”

A source with knowledge said that several partners at the firm had expressed discomfort with continuing representations of Second Amendment-related cases following the Uvalde, Texas, school massacre. In the last few days it became apparent that the break was irreparable and that Clement and Murphy would leave out of loyalty to their clients.

Thursday evening, Clement and Murphy called out their former employer as “the law firm that got tired of winning” in a Wall Street Journal op-ed.

“Many businesses drop clients or change suppliers as convenience dictates. To others, the firm’s decision will seem like one more instance of accessing to the demands of the woke,” they wrote. “But law firms aren’t supposed to operate like ordinary businesses. Lawyers owe a duty of loyalty to their clients.”

“We wish them the best of luck in the future and we look forward to collaborating with them in the future in matters not involving the Second Amendment,” said Jon A. Ballis, chairman of Kirkland’s Executive Committee.

The petitioners in the case resolved Thursday were Robert Nash, Brandon Koch and the New York State Rifle & Pistol Association — an NRA affiliate.

Nash and Koch had passed the required background checks and obtained licenses to carry guns for hunting and target practice, but they had not been able to establish a special need for self-defense that is required under the New York state law to receive an unrestricted license .

Clement said at oral arguments last year that the law makes it almost impossible for an ordinary individual to obtain a license because the “proper cause” standard is so demanding and is left to the “broad discretion” of the licensing officer.

“Good, even impeccable, moral character plus a simple desire to exercise a fundamental right is,” Clement said, “not sufficient.” “Nor is living or being employed in a high crime area.”