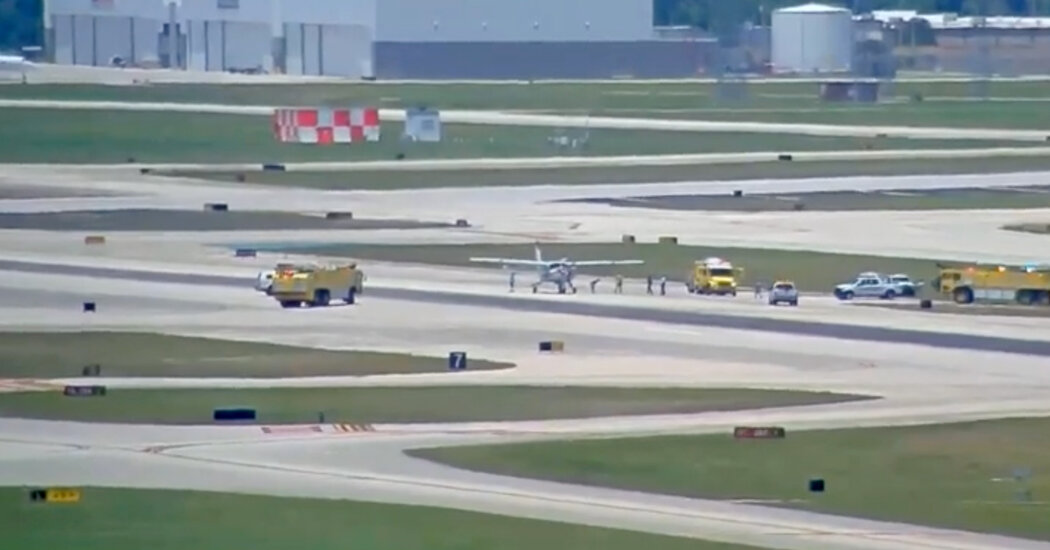 A passenger without any flying experience safely landed a private plane on Tuesday at a Florida airport after the pilot had a medical issue, according to the Federal Aviation Administration.

The plane, a single-engine Cessna 208, landed around 12:30 pm at Palm Beach International Airport, the FAA said. The aircraft had departed from Marsh Harbor in the Bahamas an hour and a half earlier, according to Flight Aware, a flight tracking website.

Only three people were on board, the pilot and two passengers, the FAA said. Their names were not released.

Air-traffic control audio captured the minutes before the landing, when one of the passengers was forced to take over during the flight.

“I’ve got a serious situation here,” the passenger said to a controller at a tower in Fort Pierce, Fla., according to audio archived on LiveATC.net. “My pilot has gone inconsistent, and I have no idea how to fly the airplane.”

The passenger also said that he did not know where the plane was.

“I see the coast of Florida in front of me, and I have no idea,” said the passenger, who was also struggling to turn on the navigation system.

During a nearly 10-minute exchange, the air traffic controller guided the passenger, then about 20 miles east of Boca Raton, telling him to hold the wings level, follow the coastline and attempt to slowly descend. Air traffic control at Palm Beach International Airport then took over.

Robert Morgan, the air-traffic controller who said he helped the passenger successfully land the plane in Palm Beach, described the experience in an interview with local news station WPBF.

“I knew the plane was flying like any other plane, I just knew I had to keep him calm, point him to the runway and tell him how to reduce the power so he could descend to land,” Mr. Morgan said.

Mr. Morgan, an experienced air-traffic controller and flight instructor, told WPBF that he had never flown a Cessna 208 aircraft before. Instead, he linked on cockpit images he found online.

“Before I knew it, he said, ‘I’m on the ground, how do I turn this thing off?,’” Mr. Morgan said to WPBF. He hugged the passenger after his arrival on the tarmac.

Becoming a private pilot with a single-engine class rating requires at least 40 hours of flight time, including at least 10 hours of solo flying and multiple takeoffs and landings, according to federal aviation laws.

The owner of the Cessna 208 plane is a limited liability corporation registered in Delaware, according to records from the FAA, which is investigating. The corporation could not be reached for comment.

After the emergency landing, one patient was transported to an area hospital, the Palm Beach County Fire Rescue told CBS.