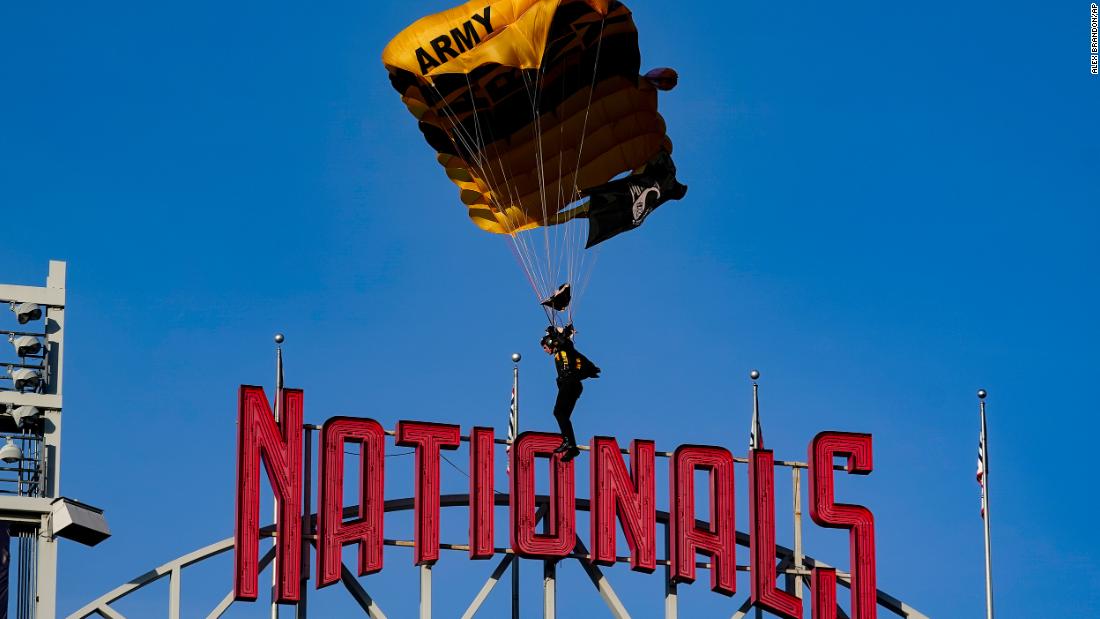 The exhibition was apparently part of a military appreciation night event hosted by MLB’s Washington Nationals. Shortly after 6:25 pm ET, after dropping streamers to gauge the wind, a Golden Knights pilot gave an air traffic control tower at Ronald Reagan Washington National Airport their plan to drop the parachutists, including the specific direction they were planning to fly.

US Capitol Police, apparently, had not been notified.

“The USCP is tracking an aircraft that poses a probable threat to the Capitol Complex,” the email began, listing instructions for people at various locations at the complex.

Capitol Police moved swiftly to evacuate the campus, sounding a piercing alarm throughout the Capitol and its surrounding office buildings. Officers were going door to door in the building to make sure those inside were leaving as quickly as possible.

Outside, the sounds of sirens rank in the air as Capitol Police shooed evacuating staffers and curious tourists out of the area. Everyone was forced out past the office buildings on both sides of the Capitol Square.

In the skies above, the plane in question could be seen making its slow circle around Washington as those anxiously waiting for answers pointed to the parachutists dropping into Nationals Park several blocks down South Capitol Street.

About 20 minutes later, the Capitol Police said there was no threat.

“The Capitol was evacuated out of an abundance of caution this evening. There is no threat to the Capitol,” the department tweeted.
capitol police confirmed later that all congressional buildings had reopened and “our federal, state and local partners are still working to get more information.”

Kelli LeGaspi, a spokeswoman for US Army Recruiting Command, said the Army was investigating the incident.

“We are reviewing all aspects of the event to ensure all procedures were followed appropriately to coordinate both the flight and the parachute demonstration,” LeGaspi said in a statement. “We will not comment further until we are able to determine the facts of the situation.”

CNN has reached out to Capitol Police, the Nationals and the Federal Aviation Administration for comment.

In a statement, House Speaker Nancy Pelosi blamed the FAA for the incident.

“The Federal Aviation Administration’s apparent failure to notify Capitol Police of the pre-planned flyover Nationals Stadium is outrageous and inexcusable,” the California Democrat said. “The unnecessary panic caused by this apparent negligence was particularly harmful for Members, staff and institutional workers still grappling with the trauma of the attack on their workplace on January 6th.”

Air traffic controllers at Reagan, however, were aware of the Golden Knights flight, according to a recording from liveatc.net.

At 6:21 pm, a controller at the airport’s tower advised a Southwest airlines flight that “two miles Northeast of National’s tower, there’s the Golden Knights plane,” and said they were in the vicinity of the stadium.

The Southwest pilot replied that they had the aircraft in sight.

Such security alerts at the Capitol happen occasionally. The Capitol was briefly cleared and the White House was temporarily locked down when a single-engine plane wandered into restricted airspace in April 2009.

It was also evacuated in January 2011 when a commercial airliner accidentally entered restricted airspace.

This story has been updated with additional reaction.

CNN’s Brian Rokus and Oren Liebermann contributed to this report.