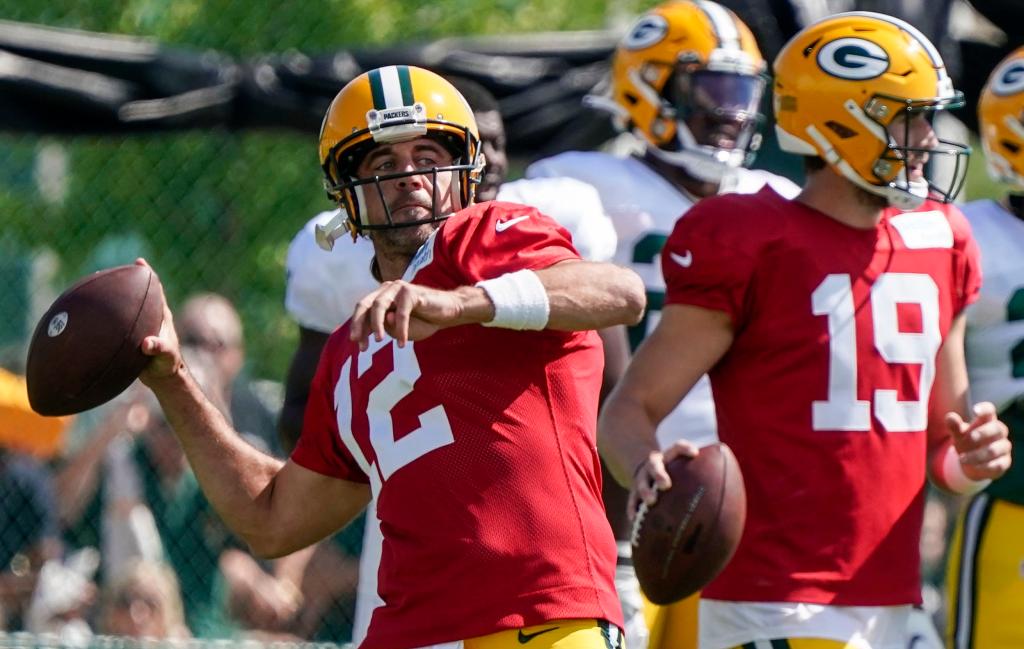 Aaron Rodgers is getting tired of his receivers dropping passes as the NFL regular season fast approaches.

The longtime Green Bay quarterback, who lost Davante Adams (traded to the Las Vegas Raiders) this offseason, put the onus on the young receivers, challenging them to be more consistent.

“It’s unfortunately some of the same guys,” Rodgers said after a choppy practice against the New Orleans Saints on Tuesday. “Repeat mistakes [are] a problem, so we’ve just got to clean those things up a little bit. The young guys, especially young receivers, we’ve got to be way more consistent. A lot of drops, a lot of bad route decisions, running the wrong route. We’ve got to get better in that area. But I felt like the line for the most part held up pretty good, which was good to see.”

Rodgers’ annoyance wasn’t directed at Allen Lazard, who Rodgers believes can be a legitimate No. 1 receiver. Rodgers also is comfortable with Randall Cobb, who he says is one of the top slot receivers in the league while adding free-agent pickup Sammy Watkins had his best day of practice.

But Rodgers wasn’t thrilled with the other receivers who made many miscues during the penalty-filled practice, which also included a drop by rookie Romeo Doubs on a pass Rodgers called his best throw of the day.

Doubs has had productive moments for the Packers this preseason, including a 33-yard touchdown against the 49ers, but the fourth-round draft pick also has been plagued by drops, including two in the preseason opener. He let one slip through his hands Tuesday after he beat Saints cornerback Bradley Roby deep down the right sideline.

When asked whether he was talking about that play as part of his criticism, Rodgers said: “No, not necessarily, but that was my best throw of the day.”

Rodgers said the struggling receivers need to get up to speed quickly or they won’t be playing.

“It’s coming up,” Rodgers said of the regular season. “Yeah, it’s coming up. It really is. We’re going to play our best guys when the season starts. And whoever those guys are, those guys are going to get the reps. It’s the guys I trust the most and the guys the coaches trust the most. A lot of it is just the simple responsibility in the offence. Way before body positioning and movement and throw, and all that stuff, are you in the right spot at the right time? Are you running the right road?”

The drops weren’t the only miscues that set Rodgers off.

“A lot of mental errors, a lot of pre-snap penalties,” the reigning NFL MVP said. “Kind of been the theme of camp. Simple, simple plays we’re messing up.”

Green Bay made many similar mistakes in their 28-21 loss to the host 49ers in their preseason opener. Those miscues led to three interceptions by Jordan Love, but Rodgers didn’t put the blame on his backup quarterback for the picks.

Rodgers referred to Love’s first pick, a pass to tight end Tyler Davis as a dropped pass, the second as “not a great route, not a great finish by Romeo” and the third to Amari Rodgers as “a contested ball [to] a guy who’s running the wrong road.”

Rodgers also had a warning for the young receivers if they don’t pick it up soon.

It wasn’t all negative for the Rodgers and the Packers’ No. 1 offense on Tuesday. They did manage a game-winning field goal in their only two-minute drill of practice.

“The offense is growing,” Lazard, who is beginning his fifth season with the Packers, said after practice. “It’s coming along and everything. We had a lot of false starts, a lot of missed signals and stuff like that today, which is not the standard that we’ve had, especially in recent history. So I think there’s a lot to improve on from that standpoint. But overall, I thought we did well.”