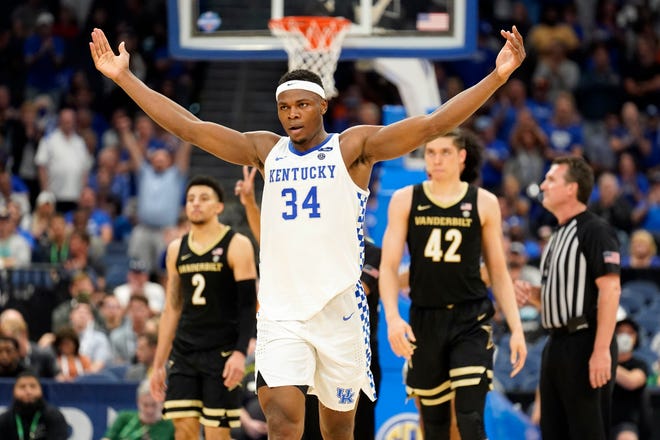 LEXINGTON, Ky. – There has been little to celebrate for Kentucky basketball fans since a shocking season-ending loss to No. 15 seed Saint Peter’s in the NCAA Tournament.

Until Wednesday at least.

Beloved star forward Oscar Tshiebwe, who swept the major National Player of the Year awards, is returning to school. The projected second-round pick announced he will delay starting a professional career for at least one more year in order to play for Kentucky again next season.

After more than a decade of UK stars leaving Lexington after just one or two seasons of college basketball, Tshiebwe’s return offers hope that name, image, and likeness reforms could usher in more stability for John Calipari’s rosters moving forward. Of the 14 underclassmen to previously sweep the Player of the Year awards since 1977, only two have returned to school the next year: Ralph Sampson in 1982 and Tyler Hansbrough in 2008.

However, of the 12 underclassmen who swept the awards and left college for the NBA, 11 were picked in the first six picks of the ensuing draft. Only one (Jalen Brunson, 2018) was a second-round pick, the range Tshiebwe was projected to be selected in if he entered in the 2021 draft. Combine Tshiebwe’s middling draft stock and the possibility of earning significant money off NIL endorsement deals at UK next season — if questions about his student visa status are resolved — and his decision was different than any Player of the Year before him.

No Kentucky player had recorded 20 rebounds in a game since 1994 before Tshiebwe reached the plateau in his Wildcat debut. He waited all of one game to grab 20 rebounds again. Tshiebwe topped 20 rebounds five times in 33 games. He broke Shaquille O’Neal’s Rupp Arena rebound record with 28 boards in a win over Western Kentucky in December.

The 6-foot-9, 255-pound forward who played two years at West Virginia before transferring to UK also led Kentucky in scoring (17.4 points per game), blocked shots (55) and steals (60). The SEC coaches named him to the league’s All-Defensive Team.

Why didn’t Oscar Tshiebwe declare for the 2022 NBA draft?

Despite his record-breaking season, Tshiebwe was projected as a second-round pick in most mock drafts.

There are significant questions about how his game translates to the professional level. The Democratic Republic of the Congo native is undersized to play center in the NBA and has yet to prove he can shoot well enough to thrive in an NBA offense that would likely need him to operate on the perimeter. His ability to defend similar-sized players on the perimeter at the next level is also in doubt.

“I want to be a lottery pick, but I’m not there yet,” Tshiebwe said on ESPN’s SportsCenter after announcing his decision.

Tshiebwe was unable to cash in on his record-breaking season through NIL endorsement deals like his UK teammates because of questions about the effect NIL deals have on the visa status of international college athletes, but there has been renewed optimism in recent weeks from UK that those questions had been resolved.

Earlier this month, Tshiebwe and UK boosters Joe and Kelly Craft — Kelly Craft is the former US ambassador to the United Nations and a possible Republican candidate for governor in 2023 — met with US Sen. Mitch McConnell to discuss the visa issue. If NIL deals are on the table for Tshiebwe, he could earn more money as the biggest star in college basketball next year through endorsements than as a second-round draft pick bouncing between the G League and an active NBA roster.

Citing his student visa status, Tshiebwe declined to elaborate on any new NIL opportunities during the SportsCenter interview.

What does Oscar Tshiebwe’s decision mean for the 2022-23 Kentucky basketball roster?

Even with Tshiebwe’s return, Kentucky’s 2022-23 roster remains in flux, but having the Player of the Year to build around immediately changes the preseason outlook for the Wildcats.

Tshiebwe and junior 3-point specialist CJ Fredrick, who missed all of last season with a hamstring injury after transferring from Iowa, have announced their returns. Freshman forward Daimion Collins is also reportedly planning to return to UK but has yet to announce a decision publicly.

Junior forwards Keion Brooks and Jacob Toppin have declared for the draft while leaving open the option to return to college. Neither player is projected to be picked in the draft this season, but similar projections have not stopped multiple Kentucky underclassmen from electing to start a professional career anyway in recent years. Toppin is generally expected to return to UK, but Brooks’ decision is less certain. After three inconsistent seasons in Lexington, Brooks could also explore transfer options even if he pulls his name from the draft.

Tshiebwe’s return could cause ripples on UK’s bench.

Now, sophomore Lance Ware will have to decide if he is content to return as Tshiebwe’s primary backup. Ware has given no indication he plans to leave Kentucky, but he undoubtedly would have a greater chance for minutes at another school with Tshiebwe back in the fold. He averaged 6.3 minutes per game last season and did not play at all in 6 of 34 games.

Kentucky has not signed a post player in its 2022 high school recruiting class but did host late-rising Canadian prospect Leonard Miller for a visit over the weekend. The 6-foot-10 Miller, a stretch forward who could play mostly on the perimeter, is also considering jumping straight to the professional ranks through the NBA’s G League.

UK has been linked to Utah State transfer Fardaws Aimaqthe only player in the country who averaged more defensive rebounds per game than Tshiebwe, and Morehead State transfer Johni Broome in the transfer portal but neither player is likely to pick Kentucky with Tshiebwe back on campus. A depth addition to the frontcourt through the portal might still be needed if Kentucky loses multiple players from the group of Brooks, Toppin, Collins and Ware.

Which guards are on the roster to get the ball to Tshiebwe next season remains a question.

Super seniors Davion Mintz and Kellan Grady played their final games as Wildcats. Little-used reserves Dontaie Allen and Bryce Hopkins are transferring. Junior point guard Sahvir Wheeler, the two-time SEC leader in assists, has yet to announce a decision on his future.

Kentucky signed consensus top-10 ranked high school prospects Cason Wallace and Chris Livingston to boost its backcourt next season, but the wait goes on to learn if former No. 1-ranked prospect Shaedon Sharpe will play for the Wildcats. Sharpe graduated early to enroll at UK in January but only practiced with the team and did not play in games. Calipari and Sharpe’s mentor have publicly stated the plan is for Sharpe to return next season, but NBA draft analysts are still projecting him to enter the draft, where he is a projected top-10 pick in June.

If Sharpe leaves, Kentucky’s roster lacks the elite perimeter scorer he is projected to be at the next level. Calipari would almost certainly need to add to the backcourt through the transfer portal, where UK has been at least linked to almost every high-scoring guard available.

Point guard is a question too as even if Wheeler returns to Kentucky he might face more competition for minutes on the ball. Wallace can play on or off the ball, and Kentucky could add another combo guard in the portal.