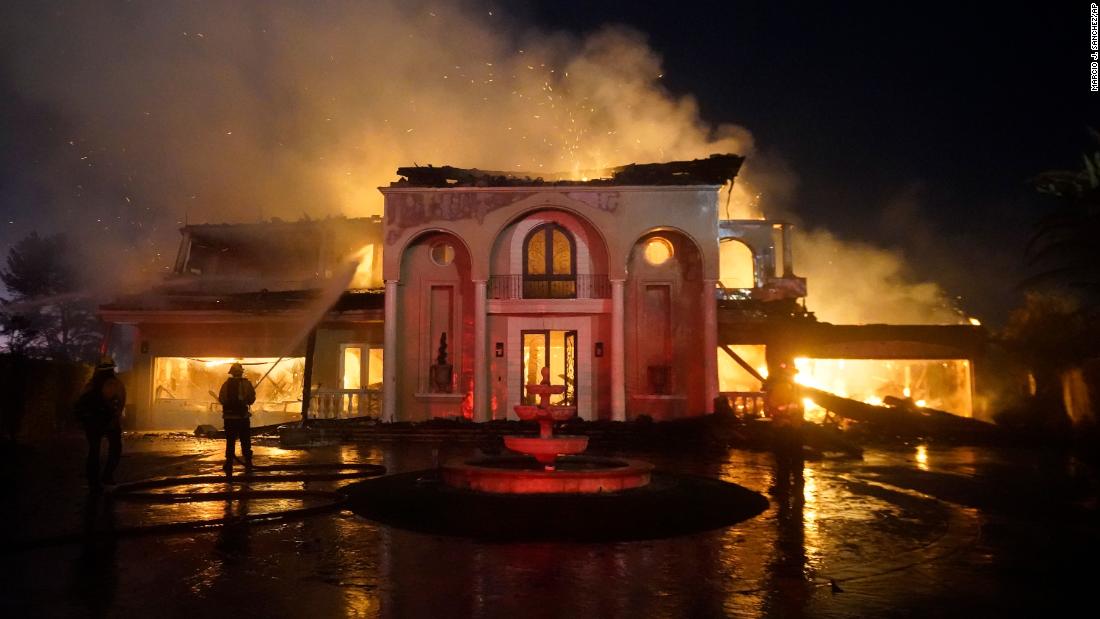 Concerns loom that embers may spread in coming days as California and the region expect temperatures 10 to 15 degrees above average into early next week, with forecast highs topping 100 degrees in parts of the state, CNN meteorologist Taylor Ward said.

Allan Aguilera and his family decided to evacuate Laguna Niguel on Wednesday when they saw the scope of the flames from a lookout point in the neighborhood, he told CNN.

“When we reached the top, we saw the full scale of how big the fire was and witness how quickly it was spreading,” he said. “There were tons of people in the area doing the same, watching the fire before the winds changed and began pushing the flames closer and closer. At that point we decided to leave and go prepare for potential evacuation.

“The situation was incredibly tense, but we kept our cool, gathered our most valuable belongings … and made an early evacuation to avoid any potential bottle-necking if the worst case scenario were to play out,” he added.

The cause of the fire is still under investigation, though investigators say “circuit activity” was going on “close in time” to when it was reported, Southern California Edison said in an initial incident report released Wednesday. The utility did not provide any more details on the circuit activity, and fire officials did not comment or confirm any details during a Thursday news conference.

The speed and intensity of the Coastal Fire shocked officials and scientists who say there was not a high risk of fire Wednesday. While winds that helped fuel the fire reached up to 30 mph, according to the National Weather Service, gusts off the Pacific Ocean were cool and humid.

“The humidity was high, which isn’t necessarily optimal to get that kind of burning,” said Greg Martin, a meteorologist at the weather service office in San Diego, said Thursday. “I was really surprised when I saw the smoke plume yesterday evening on my commute and wondered what was burning.

“That was not what I would have thought would be an ideal situation, and yet we had a substantial fire,” he said.

Though the winds were not typical of high fire risk, the region is suffering from a prolonged intense drought, the US Drought Monitor says. Dry brush and vegetation will increasingly feed fires like the one in Orange County, the county fire chief said.

“The fuel beds in this county, throughout Southern California, throughout the West, are so dry that a fire like this is going to be more commonplace,” Brian Fennessy said.

“We’re seeing spread in ways that we haven’t before,” he said. “Five years ago, 10 years ago, a fire like that might have grown to an acre, couple acres” before firefighters could control it. But now, “fire is spreading in this vegetation very dry and taking off.”

Residents of Laguna Niguel neighborhoods were under mandatory evacuation orders Wednesday and Thursday as city officials declared a state of emergency so resources could be accessed quickly.

The Coastal Fire comes as the West suffers from a multi-year drought that is not expected to abate in the coming months, according to the National Oceanic and Atmospheric Administration’s spring outlook.
Experts are concerned with how early fires are striking this year in California, where fire seasons have historically peaked starting in late summer. In January, over 600 acres of the state’s Monterey County were burned by the Colorado Fire.

“It’s a result of climate change, it’s a result of the drought we’re seeing,” Issac Sanchez, Cal Fire’s battalion chief of communications, told CNN. “The Coastal Fire is a graphic example that you don’t need thousands of acres burned to impact you.”

“It’s way too early” for a fire like the Coastal Fire in Southern California, said Bill South, a meteorologist at the National Weather Service in Hanford. “This has the potential to be a very bad fire season. And as everyone knows, we’re in a drought here throughout the entire state of California.”

In the past week alone, extreme drought expanded from covering 40% to 60% of the state, the US Drought Monitor reported Thursday, and January to April were California’s first four months of the year on record.
The extreme drought conditions afflicting the West are the worst in centuries, a recent study found. Researchers determined the period from 2000 to 2021 was the driest in 1,200 years.