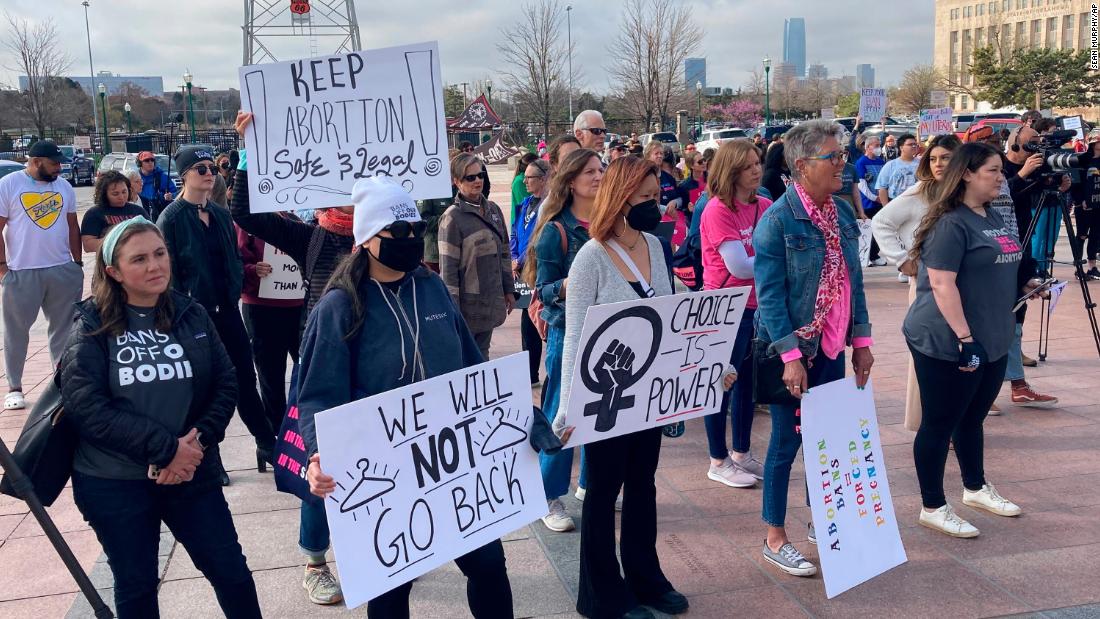 The bill, Senate Bill 612, would make performing an abortion or attempting to perform the procedure a felony punishable by a maximum fine of $100,000 or maximum 10 years in state prison, or both.
The legislation, which first passed the state Senate last year, passed the state Republican-led House on Tuesday by 70-14, without debate or questions on the floor. The legislation now heads to Republican Gov. Kevin Stitt, who previously promised promised to sign every bill limiting abortion that came across his desk.

The governor’s office declined to comment on Tuesday, but the bill’s main author, GOP state Sen. Nathan Dahm, told CNN that he and the governor had previously spoken about the legislation and Stitt had said he would sign it.

The legislation would not provide exceptions in cases of rape and incest.

Under the bill, the woman would not be criminally charged or convicted for the death of her “unborn child.” The measure would not prohibit the use, sale, prescription or administration of contraceptives.

Legislators had worked closely on the bill with the national anti-abortion group Students for Life, which celebrated the bill’s final passage on Tuesday.

Republican state Rep. Jim Olsen, the bill’s principal House author, told CNN that he believes “rape and incest is a horrible crime” and though the baby is conceived in a “horrible situation,” that it “still has a right to life.” “The baby should not be liable for the sins of the father,” he said. “It’s still a life.”

The bill’s passage coincided with abortion rights advocates’ protest on Tuesday at the Oklahoma state Capitol against restrictive abortion bills being considered this legislative session.

Emily Wales, the interim president of Planned Parenthood Great Plains Votes, who participated in the protest, told CNN that Tuesday’s bill marks the most restrictive bill on abortion passed this legislative session.

Wales said they expect the governor to sign the bill into law and anticipate a legal challenge.

Planned Parenthood Action Fund said SB 612, if allowed to take effect, “would be devastating” for Oklahomans and also Texans, who make up nearly half of the patients who seek abortion care in Oklahoma.

“Now, Oklahomans could face a future where they would have no place left in their state to go to seek this basic health care,” the group said in a news release.

Rep. Emily Virgin, the House Democratic leader, said in a statement Tuesday that “unfortunately, this is what we are seeing in many Republican-controlled states: a movement by Republicans to use unconstitutional legislation like Senate Bill 612 to distract from the actual challenges our citizens face.”

“As elected leaders, our focus should be on expanding access to health care, protecting public education, and addressing infrastructure needs, but instead, Republicans are more concerned with re-litigating Supreme Court decisions from the state legislature. These bills hurt people, waste taxpayer resources, and get us no closer to our shared goal of a better tomorrow.”

The Oklahoma state Senate is also considering legislation, House Bill 4327, modeled after a controversial Texas law that allows enforcement through private civil lawsuits. That bill also would ban most abortions at any point in pregnancy and allow private citizens to enforce the law through civil litigation.

This story has been updated with additional details Tuesday.