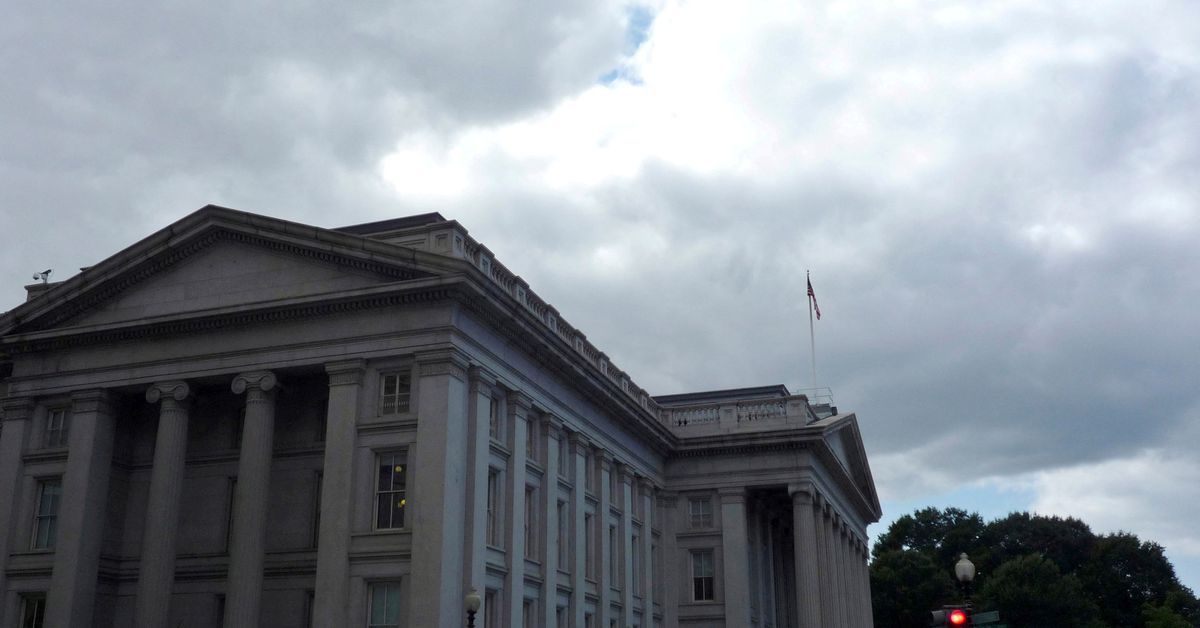 The US Treasury building is seen in Washington, September 29, 2008. REUTERS/Jim Bourg/File Photo

WASHINGTON, April 20 (Reuters) – The United States on Wednesday imposed sanctions on dozens of people and entities, including a Russian commercial bank and a virtual currency mining company, hoping to target Moscow’s evasion of existing sanctions over Russia’s invasion of Ukraine.

The US Treasury Department said it designated a virtual currency mining company for the first time, alongside more than 40 people and entities led by US-designated Russian oligarch Konstantin Malofeyev.

“Treasury can and will target those who evade, attempt to evade, or aid the evasion of US sanctions against Russia, as they are helping support Putin’s brutal war of choice,” Treasury under secretary for terrorism and financial intelligence, Brian Nelson, said in a statement.

The Russian Embassy in Washington did not immediately respond to a request for comment.

The United States and its allies have imposed several rounds of sanctions on Moscow since its Feb. 24 invasion of Ukraine, including targeting the country’s largest lenders and Putin himself.

The Treasury also put sanctions on Russian commercial bank Transkapitalbank, whose representatives it said serve several banks in Asia, including in China, and the Middle East, and have suggested options to evade international sanctions.

Its subsidiary, Investtradebank, was also designated.

Wednesday’s action freezes any US assets of those designated and generally bars Americans from dealing with them.

But Washington issued two general licenses related to Transkapitalbank alongside the sanctions, authorizing the wind down of dealings with the bank until May 20 and certain transactions intended for or originating from Afghanistan until Oct. 20 “in support of efforts to address the humanitarian crisis.”

The United States also imposed additional sanctions on Russian oligarch Malofeyev, whom US authorities have long accused of being one of the main sources of financing for Russians promoting separatism in Crimea. He was first designated under the Obama administration in 2014 when Russia annexed Crimea.

Earlier this month, the US Justice Department charged Malofeyev with violating sanctions imposed on Russia after its invasion of Ukraine. read more

“The United States will work to ensure that the sanctions we have imposed, in close coordination with our international partners, degrade the Kremlin’s ability to project power and fund its invasion,” Nelson said.

The US State Department is also imposing visa restrictions on over 600 people in a bid to promote accountability for human rights abuses and violations, US Secretary of State Antony Blinken said in a statement, barring them from traveling to the United States.

“We will use every tool to promote accountability for human rights abuses and violations of international humanitarian law in Ukraine,” Blinken said.