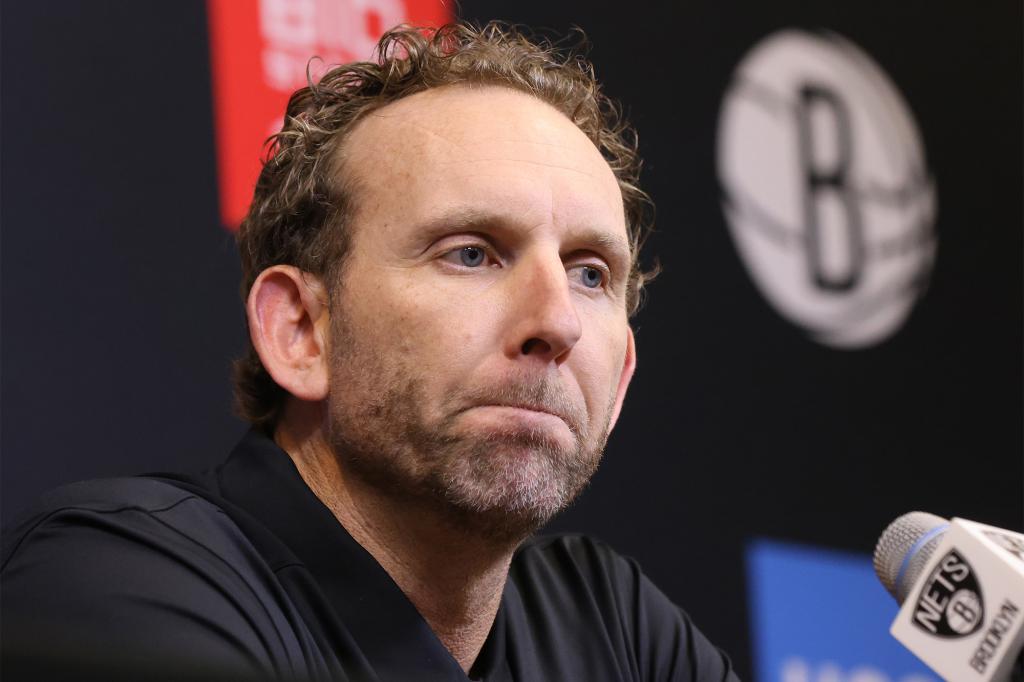 Kyrie Irving was not physically in the room when the Nets conducted their public autopsy Wednesday in Brooklyn, but he was very much there in spirit. Team management has clearly decided it is time to confront Irving on his commitment to the championship cause, and in theory, any right-minded fan would say, “Amen to that.”

General manager Sean Marks was asked if he needed to directly tell Irving that personal leaves, sabbaticals and mandate-related issues will no longer be tolerated, and that physical injury will be the only acceptable excuse for any absence if he wants to remain a Net.

“I think those are going to be discussions,” the GM responded. “It’s a team sport and you need everybody out there on the court.”

Sounds good, nice and tidy. In their first stage of recovery from a devastating first-round playoff sweep, the Nets are going to do the right thing and get tough with a $36-million-a-year point guard who doesn’t often show up for work. Brilliant.

But the last time the Nets took the fight to Irving, denying him a chance to play road games while local vaccine mandates disqualified him from playing at home, they eventually caved, in a move that would best be described as Faustian if only they had a soul left to sell.

Any legitimate contender would have exposed the Nets in the playoffs for what they were — fragile, disconnected and small — and it just happened to be the Celtics who did the deed. So there were Marks and head coach Steve Nash arriving at their postmortem presser, a grim exercise delayed by talks they had with team owner Joe Tsai about all his money that had been wasted on this team. Marks fielded most of the questions and did most of the explaining, and rightfully so.

For Marks, the NBA life was much easier as a player, coach and executive in San Antonio, where an all-time great coach, Gregg Popovich, and an all-time great player, Tim Duncan, anchored a cast of full-scholarship players who competed with walk-on selflessness and grit. The Spurs had all the character traits that Marks confessed his team now lacks because of the moves he made.

Marks had no choice but to sign Kevin Durant and Irving in 2019. No sane executive would’ve rejected the chance to acquire KD, even if the insanely talented Irving wasn’t the preferred sidekick on account of his sky-high-maintenance ways.

But when Marks traded for James Harden — sending off Jarrett Allen, Caris LeVert and a truckload of first-round picks — he knew he was acquiring a player that could be hazardous to his team’s health. Marks didn’t need to do that deal, but did it anyway and paid the price. When predictably forced to move Harden, the GM fully understood that his new hire, Ben Simmons, might be the only NBA star who’s out there for fewer tipoffs than Irving.

The Nets unraveled on cue. If they had any culture at all, it was a culture of player appeal. Marks swore that wasn’t the case, emphasizing the difference between involving superstars in and informing them of key decisions and handing them final say on personnel. But Marks is suffering from a credibility crisis right now, and doesn’t deserve the benefit of the doubt.

He junked any attempt at building a real team by assembling an All-Star team on the fly, run by an All-Star novice, Nash. That is why Marks was busy Wednesday conceding that the Nets must quit being defined by non-basketball distractions, that they must recommit to hungry and resilient players, and that everybody in the organization (starting with himself) needs to keep staring into their mirrors.

To date, when Nets officials have tried to identify their biggest problems, it seems Irving’s image keeps popping up in those mirrors.

Is the organization sold on a long-term extension this summer for the point guard, who can opt out of the final year on his deal?

“I think that’s something we’ve been discussing and we’ll continue to debrief on and discuss throughout this offseason,” Marks said.

“We’re looking for guys that want to come in here and be a part of something bigger than themselves,” Marks said, “play selfless, play team basketball, and be available. And that goes not only for Kyrie, but for everybody here.”

But especially for Kyrie, of course. When Marks referenced the franchise key’s stakeholders, he himself, Tsai, Nash and Durant. He didn’t mention Irving, who was talking like a co-owner right after his former team from Boston finished off his current team from Brooklyn.

In the end, it will probably be too difficult for the Nets to trade Irving, or to sign-and-trade him, or to let him walk after an opt-out with no assets heading back their way. The most likely summer endgame has management talking tough with the player, the player promising to be more available, the two parties agreeing on an extension and then Irving doing what Irving has always done — the good, the bad and the ugly.