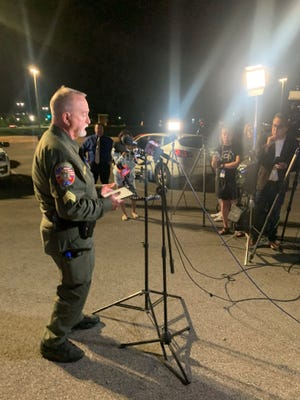 One person is dead and another is in critical but stable condition after a shooting Wednesday night outside Middle Tennessee State University’s Murphy Center.

Rutherford County Sheriff’s Office Sgt. Dan Goodwin did not release the identity of the person killed during an 11 pm news conference on the outskirts of campus.

The shooting occurred shortly before 9 pm, outside the Murphy Center, near the tennis courts as Riverdale High’s graduation ceremony concluded.

The shooter is still at large, Goodwin said.

“Tonight’s shooting at Middle Tennessee State University is a tragedy for our community. We mourn with the family who lost a loved one and the victim who was injured,” Goodwin said.

The university posted Wednesday night on Facebook about 9:15 pm warning people to leave Murphy Center immediately and shelter in place if unable to leave the area safely.

Rutherford County School spokesman James Evans said Riverdale High will be closed Thursday and a decision will be made later about Friday classes.

MTSU started summer classes on campus Monday, about a week and a half after graduation and the majority of students departed for summer break.

This is a developing story and will be updated as more information is available.