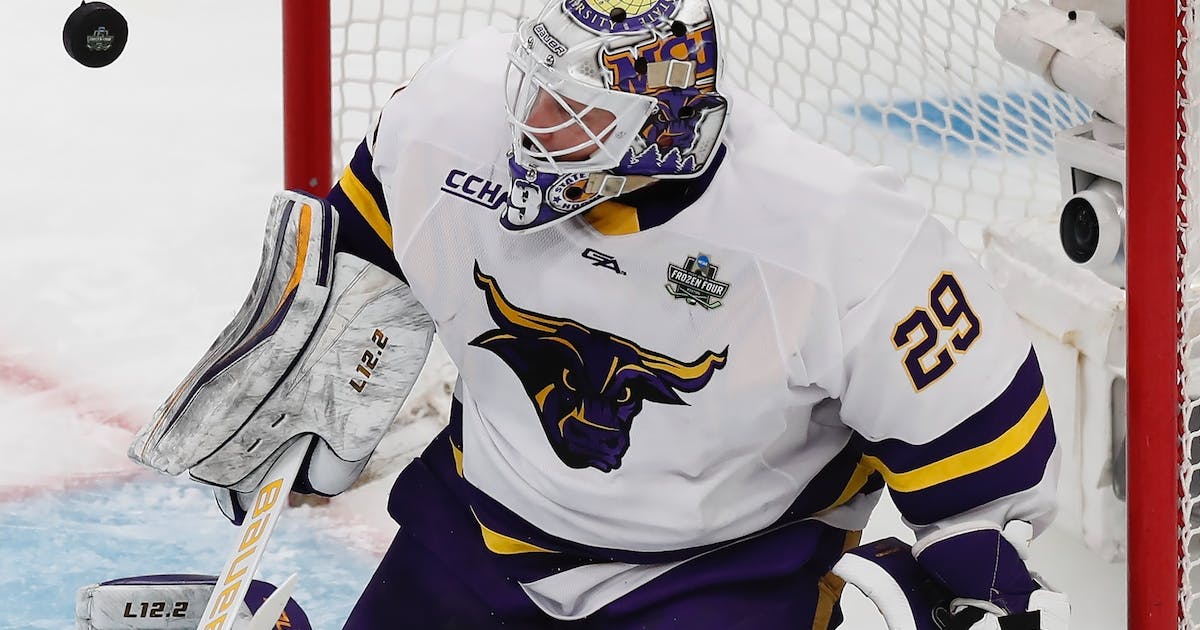 Minnesota State Mankato goaltender Dryden McKay, the national player of the year in men’s college hockey, was given a six-month suspension Monday by the US Anti-Doping Agency (USADA) after testing positive in January for a banned substance discovered in a vitamin supplement .

USADA’s announcement said the substance, Ostarine, was not listed on the supplement’s label. Tests showed it was present “at an amount consistent with the circumstances of ingestion and [McKay’s] positive test.” Because a contaminated supplement caused the positive test, McKay avoided a four-year suspension.

McKay, 25, was informed of the positive test on Jan. 31. He was given a provisional suspension, but after the supplement was found to be contaminated, an independent arbitrator and the NCAA cleared him to play. He led the Mavericks to the NCAA men’s Frozen Four, where they defeated the Gophers 5-1 and lost by that same score to Denver for the championship.

In between those games, McKay received the Hobey Baker Award, given to the nation’s top college player. His 38 wins set a single-season men’s Division I record.

A native of Downers Grove, Ill., McKay played four seasons for the Mavericks. He is a free agent who has not signed a pro contract.

“I am and have always been a clean athlete who has never taken shortcuts,” McKay said in a statement posted on Twitter. “I don’t take muscle building or performance enhancing supplements or creatine and never will. … This experience has been a very unexpected matter for me and my family. I am remaining optimistic and looking forward to beginning my pro career this fall. “

According to USADA’s website, Ostarine is an anabolic agent that is not approved for human consumption anywhere in the world. The agency said it is sometimes illegally included in dietary supplements, which may omit it from the label or list it under another name.

In his Twitter statement, McKay said he took the supplement to boost his immune system during the spread of Covid’s Omicron variant. Because he was an alternate for the US men’s hockey team at the Beijing Olympics, he was subject to USADA drug testing.

McKay said he consumed the supplement for 10 days. After the positive test, he sent all substances he was taking to a lab for analysis. Canada’s Sportsnet reported that the supplement manufacturer also sent a sealed bottle from the same lot, and both that bottle and McKay’s bottle tested positive for Ostarine.

Though McKay was allowed to finish the season, he was not absolved. USADA’s announcement said McKay began his suspension April 14, the day he accepted the sanction.

“USADA has indicated I am unable to avoid a penalty because I, as an athlete, am responsible for what goes into my body,” McKay wrote on Twitter.”[I will] accept the 6-month sanction offered by USADA so I will be able to play in October.”

McKay’s attorney, Paul Greene, told Sportsnet that unwittingly taking a contaminated supplement has happened to “hundreds of people” he has represented.

“Despite USADA’s decision to re-open the case and impose a suspension,” the statement said, “we continue to believe Dryden McKay is an impressive young man, with unquestionable character and integrity who was unequivocally committed to the standards of fairness that come with competing drug free.”