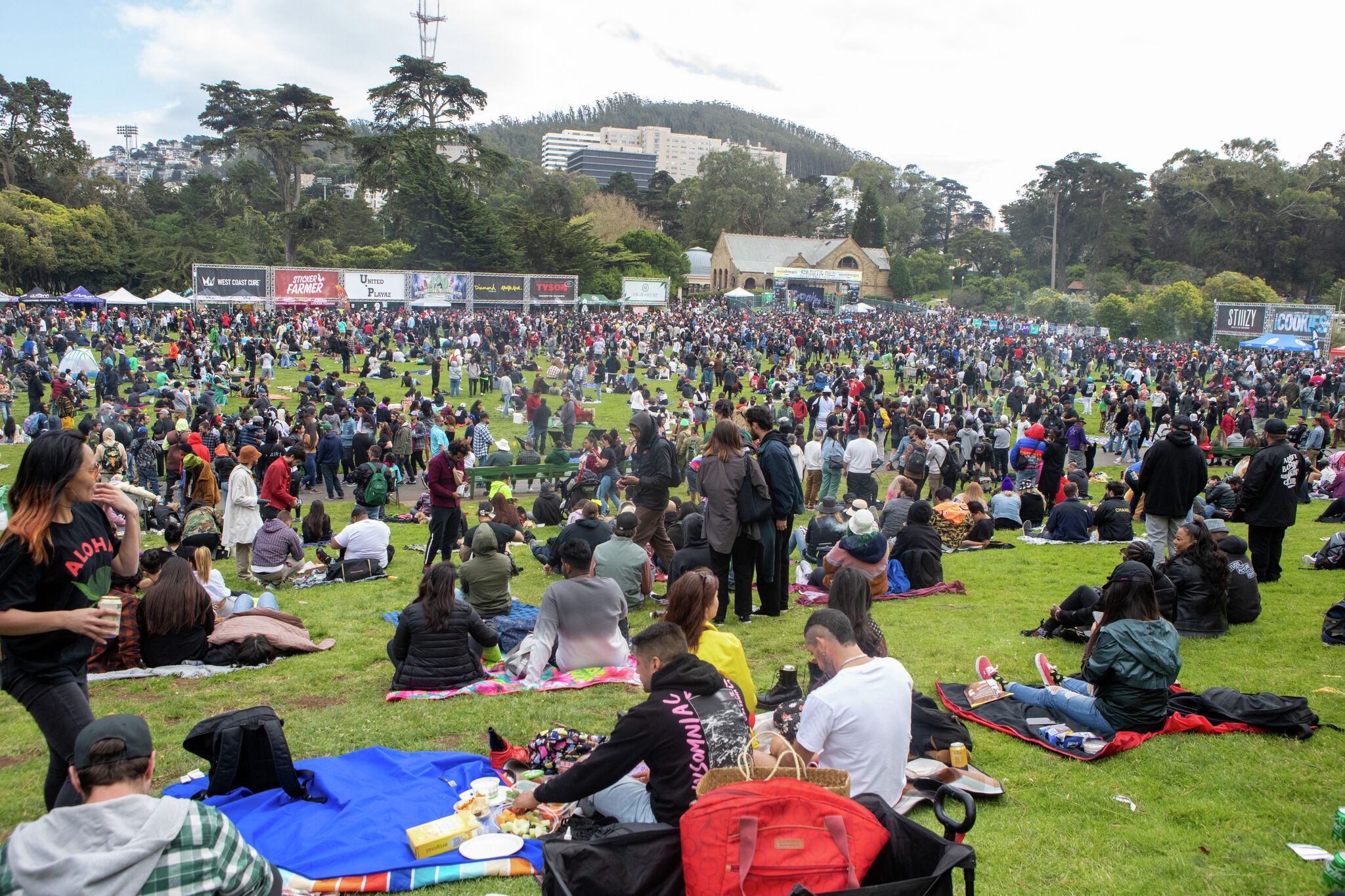 A heavy haze hovered above Robin Williams Meadow in Golden Gate Park on Wednesday afternoon, but it wasn’t due to fog rolling in from the ocean.

Ever since a group of San Rafael high school students coined the term “420” in the 1970s, April 20 has become cannabis culture’s highest holiday. This year, thousands of people flocked to San Francisco from all over the Bay Area to celebrate their love of all things marijuana for the first time since 2019.

And you could literally see the excitement in the air.

Throughout the area colloquially known as Hippie Hill, cannabis smoke billowed out from joints hoisted high and three-foot bongs resting precariously on picnic blankets. Organized by longtime Northern California event producer Alex Aquino, and hosted by Berner (CEO of Cookies) and comedian Chris Riggins, the event felt like a professionally produced music festival. Although it was lacking in some important infrastructure like clearly labeled water stations, there was a large stage for performers, a fleet of food trucks and an on-site “farmer’s market” of cannabis vendors. In addition to the retail marketplace, there were plenty of unsanctioned entrepreneurs hawking loose cannabis buds from pillow case-sized plastic bags.

The crowd was an endearing mix of 20-somethings and older hippies, including a requisite middle-aged man holding a “free hugs” sign (who turned out to be quite popular). As one might expect, there was every variety of weed-themed clothing one could imagine, including a full suit covered in pot leaves with a matching fabric face mask.

The lineup for the event ranged from Bay Area turntablist legend DJ Shortkut to comedian Jeff Ross, who roasted people in the front row, including one man who identified himself proudly as a “tech founder.” In addition to the mildly offensive riffing, Ross paid tribute to deceased comedy legends Robin Williams and Bob Saget. Ross shared a memory of performing alongside Saget on April 20, 2021, in San Francisco, then cracked a few jokes in his honor.

Shortly after Ross’ set, guest of honor Mike Tyson hit the stage for a few brief words to promote his cannabis brand Tyson 2.0. The company offers several strains of cannabis flower, as well as ear-shaped edibles in reference to the former boxer’s infamous 1996 match against Evander Holyfield.

“Listen, we’re gonna take this to another level in life,” Tyson said. “I’m the world champion, and now I’m the world champion of cannabis, and we can’t be stopped. Look at us. Thousands of people [are] looking at us, and we’re getting high. This is beautiful. … Look at me, baby, look how beautiful I look up here.”

In a surprisingly heartwarming moment, Tyson presented the festival’s inaugural community and compassion award to Eve Meyer, who ran the nonprofit San Francisco Suicide Prevention for 30 years before pivoting to a second career in stand-up comedy. She gave a passionate speech about saving lives, then led the crowd in a chant of “I believe in you.”

Following Meyer, a few more presenters took the stage, including members of the United Playaz violence prevention organization, Emerald Cup judge Swami Chaitanya and comedian Hannibal Buress. Meanwhile, Tyson strolled through the hillside surrounded by an entourage as fans snapped photos, then Oakland R&B singer Goapele closed out the event. As soon as the clock struck 4:20 pm, the temperature dropped and most of the crowd quietly filed out of the park past a swarm of very strategically placed hot dog carts.

Although even many marijuana enthusiasts might have found the event to be a little cliché, the feeling of comradery in the air was undeniable, and the polish of the event was a reminder of how far cannabis culture has come in the decades since a few San Rafael teenagers coined a code word for their after-school smoking sessions.