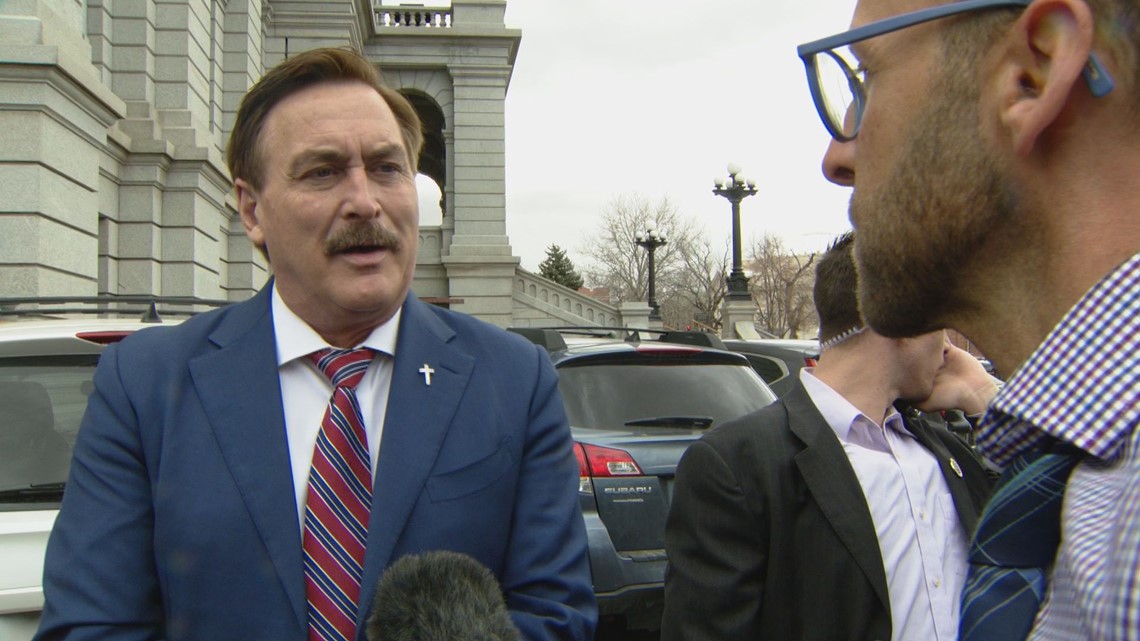 DENVER — MyPillow CEO and vocal election conspiracy theorist Mike Lindell came to the steps of the Colorado Capitol on Tuesday to headline a rally claiming to promote “election truth.”

The event featured other Republicans in Colorado who share these conspiracy theories. That included US Senate candidate and State Rep. Ron Hanks, who attended the protest in Washington DC on Jan. 6, 2020, and Sheronna Bishop, former campaign manager for Colorado Congresswoman Lauren Boebert.

RELATED: Election clerks ask deniers to present evidence or back down

Also present was secretary of state candidate and embattled Republican Mesa County Clerk Tina Peters, who faces felony and misdemeanor charges related to a security breach in the Mesa County elections office. She is also under federal investigation after confidential voting systems information from Mesa County ended up in the hands of conspiracy theorists.

Colorado’s Independent Ethics Commission is investigating Peters, as well, for allegations she accepted gifts for her legal defense that exceed the limit allowed by state law.

“If you are not a close friend or family member of an elected official or a public employee in Colorado, you can only give someone a gift of $65 per calendar year,” Jane Feldman, former executive director of the commission, told 9NEWS.

Speaking to reporters before his address, Lindell revealed to 9NEWS that he gave as much as $800,000 to a legal defense fund for Peters.

The ethical gift rules apply to travel, as well. Lindell also indicated to reporters that Peters flew on his private jet in August to attend his cyber symposium, an event with several speakers offering up claims of election fraud without evidence.

“I gave her a ride — on the cyber symposium, I give rides from people all over the country,” Lindell said. “She came to the cyber symposium with the group from Colorado. I picked people up. I invited all 50 states. All 50 states were represented. There’s your answer. Another stupid question from a stupid journalist.”

“She probably flew on [my plane],” he added.

Lindell also established he did not know Peters prior to the symposium.

Those statements could affect the ethics investigation, according to Feldman.

“If he said he had just met her and they had no prior relationship, it’s very hard to argue that he was a personal friend,” she said.

If found to have violated Colorado law, Peters could be fined twice the amount of money she went over the limit.

Recently, Peters has begun directing donations to a legal defense fund out of Wisconsin.

The “Colorado Election Truth Rally” wrapped after about three hours, though not before a process server delivered notice of a lawsuit to Lindell. The suit came from Eric Coomer who previously worked for Dominion Voting Systems and has sued various groups and individuals for defamation related to election-rigging claims.

And just before Mike Lindell makes his way to the State Capitol steps, he gets served with a lawsuit. Details to follow. #copolitics pic.twitter.com/Xn8HMD1vvp

SUGGESTED VIDEOS: Full Episodes of Next with Kyle Clark