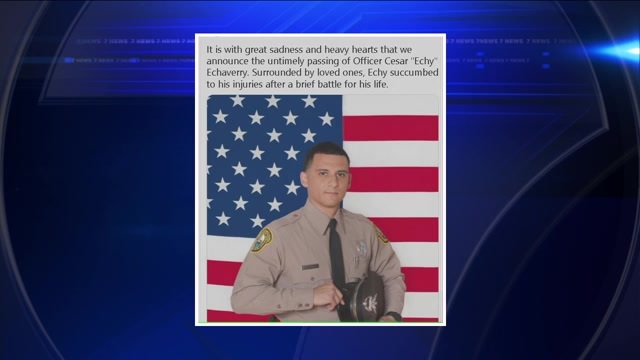 MIAMI (WSVN) – Two days after an exchange of gunfire in Liberty City, officials have confirmed that the officer involved has died.

On Monday evening, a suspect smashed his vehicle into a police cruiser and another car near Liberty City while trying to flee detectives investigating a reported armed robbery, according to Miami-Dade Police.

The officer was shot after an exchange of gunfire between police and the suspect in the area of ​​Northwest 17th Avenue and 62nd Street. Echaverry was transported to the hospital Monday evening in critical condition.

The suspected armed robber was shot dead on the scene.

After Echaverry was transported to Jackson Memorial Hospital, the law enforcement community waited outside of the healthcare facility to support and pray for their colleague.

“I am heartbroken to learn of Detective Cesar Echaverry’s death. He laid down his life to stop a violent criminal, and we will be forever grateful for his selfless service and sacrifice to our community. Echy, as he was lovingly known to his police family, will always be remembered for his courage, his sense of duty, and his unwavering dedication to keeping our residents safe.”

She went on to praise the 5-year veteran’s work with MDPD’s Robbery Intervention Detail.

“I ask that our entire community lift up his family, his loved ones, and our Police Department in prayer as they navigate an unthinkable tragedy,” she continued. “We thank Echy’s parents for raising a hero and we hold them in solidarity as they grieve. Our county is safer today because of Detective Echaverry’s bravery — a sacrifice we will never forget.”

Copyright 2022 Sunbeam Television Corp. All rights reserved. This material may not be published, broadcast, rewritten or redistributed.

Join our Newsletter for the latest news right to your inbox