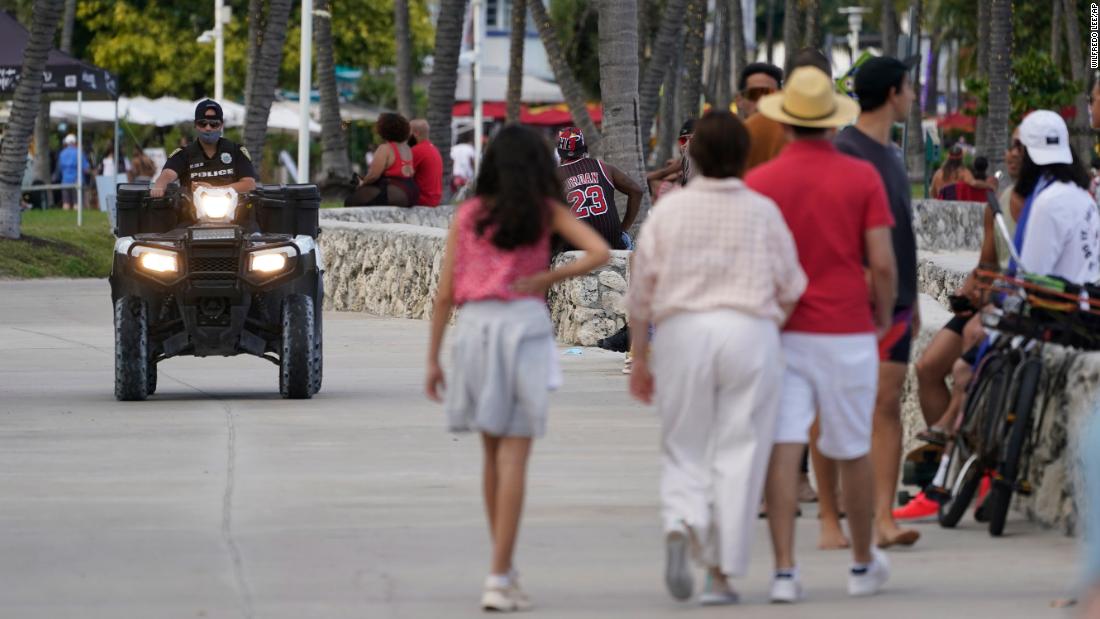 The curfew will begin at 12:01 am Thursday and last until 6 am Monday, Miami Beach Mayor Dan Gelber announced during a news conference Monday afternoon.

City Manager Alina Hudek said she would ask for the same curfew the following weekend. A public emergency order, signed by Hudek, will go to the city commission for approval in a special meeting Tuesday, she said.

The curfew and emergency order come after five people were injured in two shootings on Miami Beach’s iconic Ocean Drive over the weekend.

“If you want to see what a very frustrated and angry mayor looks like, you’re looking at him,” Gelber said during the news conference.

Gelber noted 371 officers were tasked with patrolling the crowds over the weekend.

Four of those injuries happened over the weekend, the Miami Beach Fraternal Order of Police said in a Twitter post Sunday.

“Officers are EXHAUSTED. The party needs to end. City officials must take immediate and firm action to ensure the safety of officers and residents,” the tweet said.

The announcement of the curfew came hours after two people were injured in a shooting in Miami Beach early Monday morning.

Officers were patrolling the 700 block of Ocean Drive around 1 am when they heard gunfire and located two women who had been injured, police said in a press release. Both were taken to local hospitals with non-life-threatening injuries.

Officers detained two people at the scene and recovered firearms. One of those people has since been released and officers are still searching for the primary shooting suspect, the release said.

The incident followed another shooting on Ocean Drive early Sunday morning that left three people injured, according to police.

“On Sunday at 12:15 am, officers responded to a shooting along the 800 block of Ocean Drive,” Miami Beach Police Department spokesperson Ernesto Rodriguez said.

“Detectives are speaking with several individuals to determine what transpired in the moments leading up to the shooting,” he added.

Mitch Novick, who owns the Sherbrooke Hotel in South Beach, shot footage of the Miami Beach crowd reacting to the gunfire.

In the video, gunshots can be heard as people run for safety while a large number of police officers rush towards the shooting. Novick sheltered behind a white vehicle and kept filming.

“You could see many officers heroically running towards the what was the sound of the gunfire,” Novick told CNN. “And then they came back and surrounded, I don’t know if it was a person or a vehicle, but you can see their guns drawn.”

Novick also shared security footage from his hotel in which people can be heard screaming amidst the sound of gunfire.