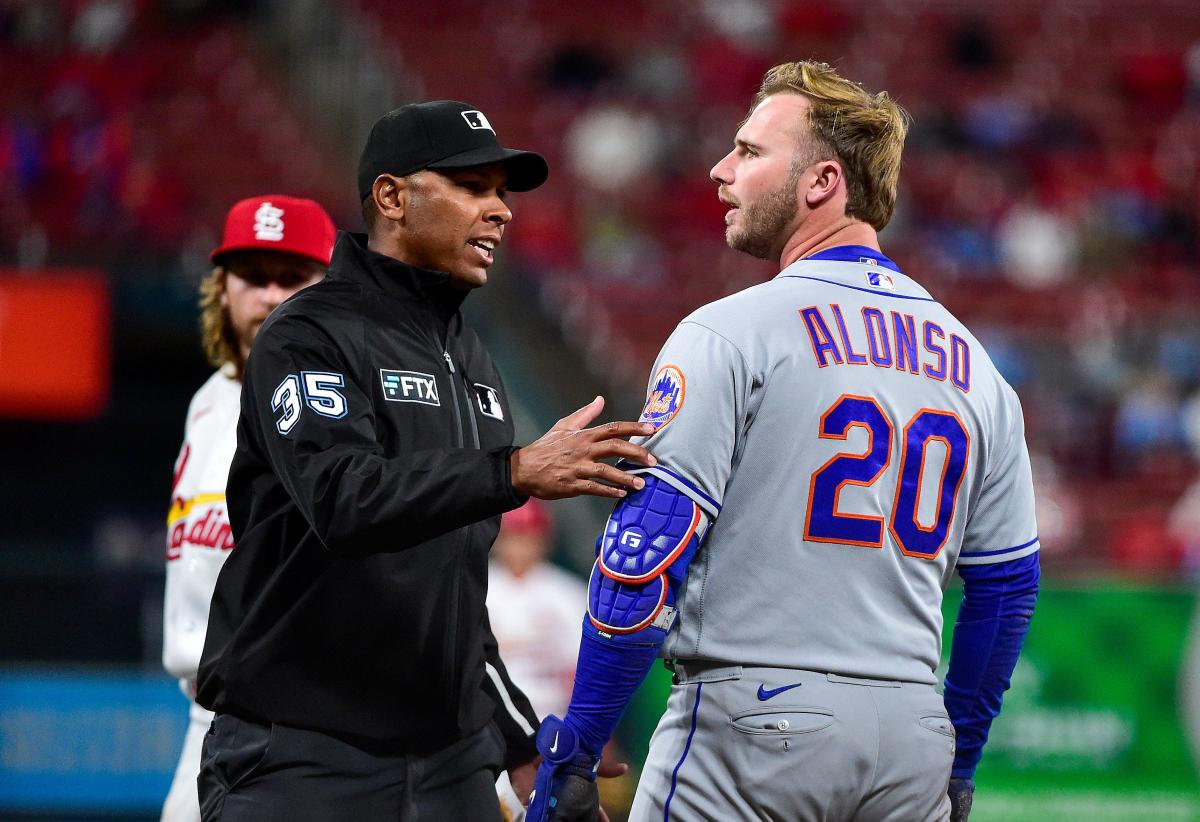 ST. LOUIS — While the Mets had just sealed a record sixth series win to start the season, there was still an air of frustration and anger following Tuesday’s victory over the Cardinals.

The irritation is justified.

Through 19 games, Mets batters have been hit an MLB-high 18 times. And once again, the Mets saw Pete Alonso escape major injury as he was hit in the head by a pitch for the second time this season.

“You care about your players and getting into right and wrong and intent and what have you,” Mets manager Buck Showalter said. “You reach a point where it’s about safety of your players. We’re lucky. You talk about a pitch that broke his helmet. It’s not good. I’m not happy.”

On Opening Day, Alonso received a fat lip after a pitch from the Nationals’ Nate Thompson careened off his helmet extension in the top of the eighth inning. One day later, Francisco Lindor suffered a cracked tooth but avoided any further damage when he was hit by Steve Cishek as the benches cleared.

Dominic Smith and Starling Marte were also hit by pitches during Tuesday’s win.

“It’s really uncomfortable at the end of the day,” Marte said. “It’s one of those things where ,whether it’s intentional or not, it has to stop. We’re tired of it and we’re going to do something about it if it continues to happen. It is uncomfortable every single time you go out there and you’re getting hit.”

More: As MLB’s weird April winds down, teams get another break on pitcher limits

‘That was an ugly ending’: Twins get walk-off win as Tigers errors lead to bizarre finish

It has become part of a disturbing trend for the Mets this season. And battery mates Chris Bassitt and James McCann believe it is part of an underlying issue of the lack of consistency in baseballs and pitchers not being able to get a hold of the ball following the crackdown on substances to try and grip the ball.

Bassitt called it “extremely annoying” to continue to see his teammates get hit. Max Scherzer said he felt like he was throwing a cue ball and overgripping the ball following his start against the Giants on a frigid night on April 19.

Both Bassitt and McCann said there is a need for a universal substance to help pitchers grip the ball.

“Sit down with players and see what players want,” McCann said. “Don’t take opinions of people that aren’t the ones on the mound trying to throw it. Don’t talk to somebody who’s not trying to stay in the box when a guy’s throwing 100 miles an hour and doesn’t have a feel for the ball. That’s the answer is talk to the players and see what the best result is.”

McCann suggests an on-deck circle behind the mound with certain essentials: pine-tar rag, sunscreen and rosin.

“You want to talk about Spider Tack and all this other stuff, yeah, get that out of the game, I agree with that, McCann said. “But give them an on-deck circle just like the hitter’s have. Let ’em have a grip on the baseball.”

After being hit up high, Alonso kept his composure but voiced his displeasure with Cardinals reliever Kodi Whitley, who tendered the ill-fated pitch, as he jogged to first base in the eighth inning.

Once again, Showalter was the first one out of the dugout for the Mets and headed out to tend to Alonso, who stayed in the game. A few of Alonso’s teammates came out of the dugout and stood just outside of the warning track on the third-base line but the Cardinals’ bench stayed still.

This article originally appeared on NorthJersey.com: Get angry after more players, including Pete Alonso, hit by pitches