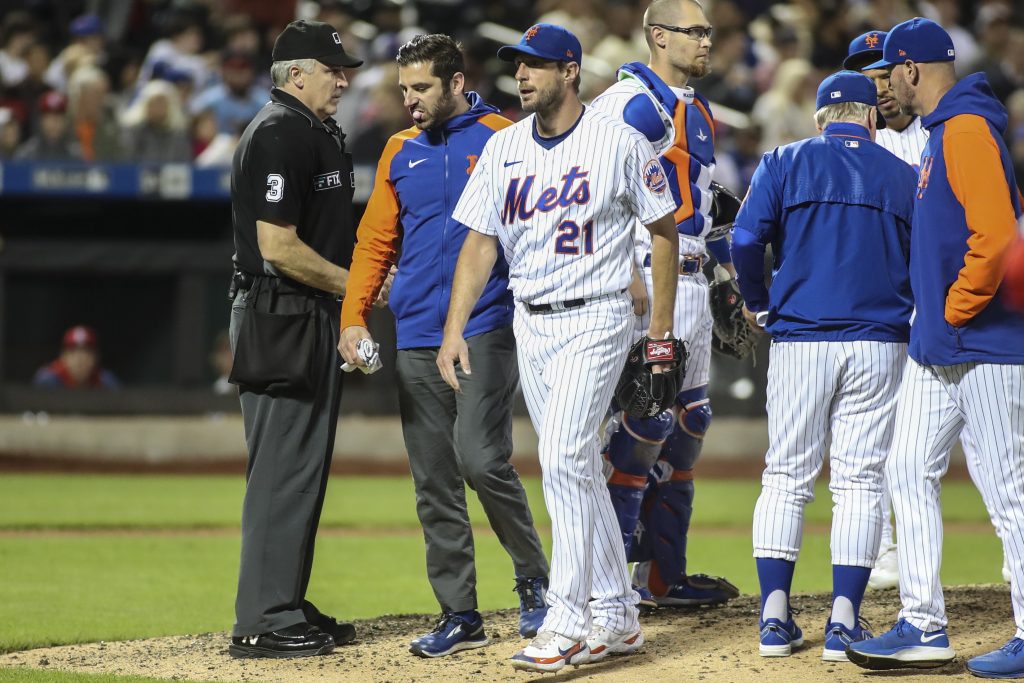 Put ace Max Scherzer pulled himself from last night’s game midway through a sixth-inning at-bat against Albert Pujols (video link). After throwing a 2-2 slider to Pujols, Scherzer immediately moved to the dugout that he was done, calling for a trainer and promptly exiting the game. The Mets announced that Scherzer was dealing with discomfort in his left side, and Scherzer told reporters after the contest that he’d felt tightness in his side throughout the day and felt a “zing” during the Pujols at-bat (video link). “I just knew I was done,” said Scherzer. The three-time Cy Young winner added that he doesn’t believe the injury to be a “major strain.”

That’ll be determined this morning, it seems, as MLB.com’s Anthony DiComo writes that Scherzer is headed for an MRI to determine the extent of the injury. While Scherzer himself downplayed the potential severity, it’s obviously a point of concern that he both pulled himself from the game and is now undergoing a round of imaging to determine whether a trip to the injured list will be necessary.

The 37-year-old right-hander inked a record-setting three-year, $130MM contract with the Mets over the winter, making him the highest paid player (on an annual basis) in Major League history. Thus far, Scherzer has been the co-ace the Mets hoped to be acquiring when doling out that deal, pitching 49 2/3 innings of 2.54 ERA ball with a 30.6% strikeout rate against a 5.7% walk rate. He’s been a major reason that the Mets’ rotation, even without Jacob deGrom, ranks fifth in the Majors in ERA and second in FIP. Scherzer and his rotation-mates have also combined for the seventh-highest strikeout rate and the lowest walk rate of any starting staff in the big leagues.

At present, the Mets are the only team in the NL East with a winning record, and at 25-14 they hold a healthy six-game lead over the second-place Phillies. That said, even a brief absence for Scherzer, placing him on the shelf alongside deGrom and righty Tylor Megill (inflammatory biceps), would be a noticeable blow. The Mets do have a deep staff that could potentially weather that trio of rotation injuries in the short-term, with lefty David Peterson presumably serving as the next man in line if Scherzer indeed misses time. Still, losing their $76.83MM one-two deGrom/Scherzer punch to the injured list before the pair is ever even healthy enough to take the mound on consecutive days isn’t a scenario the Mets hoped to face.

The Mets announced earlier this week that an MRI on deGrom, who has yet to pitch in 2022 due to a stress reaction in his right scapula, showed “continued healing.” He’s working through a throwing program and currently building up the distance from which he throws and the intensity level, but there’s no clear timetable for him to get back onto the mound and begin on a minor league rehab assignment. If Scherzer were to join deGrom and Megill on the IL, the Mets’ rotation would likely consist of Chris Bassitt, Carlos Carrasco, taijuan walker, Trevor Williams and the aforementioned Peterson.