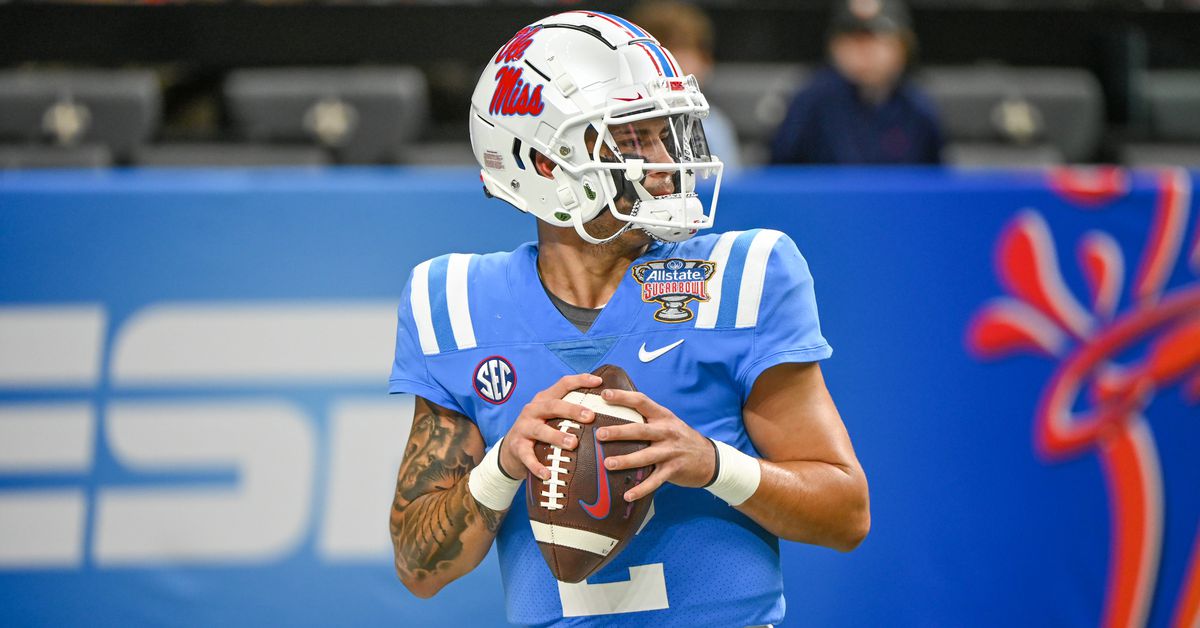 Matt Corral met with the Eagles in Philadelphia for an official top 30 visit, according to … Matt Corral. The Ole Miss quarterback revealed as much during a recent appearance on The Rich Eisen Show.

“I remember visiting the Eagles’ facility. I just remember being in awe of going there. That was a pretty cool, fun experience.”

Corral also said that he has visits lined up with the New Orleans Saints, the Carolina Panthers, the Atlanta Falcons, and the Pittsburgh Steelers. What do those teams have in common? They’re all looking for a franchise QB.

And so Corral is just the latest QB we know to be on the Eagles’ radar.

It makes sense that they (and other teams) would want to host Corral. Doing so allows them to gather more information on the ankle injury he suffered during the Sugar Bowl on January 1. That ailment prevented Corral from throwing at the NFL Combine.

Opinions on Corral’s projection to the NFL are fairly mixed. Bleeding Green Nation’s Ben Natan has him as QB2 in this year’s draft:

What he does well: Matt Corral was incredibly productive as a starter with the Rebels. More than being productive, he also seemed truly loved by his teammates and was an emotional engine for the whole offense. Corral succeeded in the pocket due to being a tough, confident passer who ran the offense efficiently with quick decisions and a quicker release. His mobility also kept defenses honest.

Where he can improve: When asked to function “outside” of the offense, Corral would sometimes play a bit too aggressive for his own abilities. His arm is good, but he trusted it too much and would make frustrating turnovers due to his poor decisions. Corral also needs to reel in the way he runs, as he often looks for much more contact than his frame can handle.

Others, such as Football Outsiders’ Mike Tanierare much more skeptical about his outlook.

Corral’s film shows a pesky-but-scrawny quarterback who executes a pea-shooter passing game. He runs hard, but he got injured in his final college game. The stat breakdown shows that he relied heavily on a system which gave him easy reads and lots of high-percentage short passes.

So what are Corral’s starting-caliber NFL quarterback attributes? A quick release? Great short accuracy? Mobility? Fine. Now: are those truly elite qualities for Corral, or are they simply all we have to talk about? Competitiveness? OK, boomer. If the best argument for someone being a starting-caliber prospect is that someone else put him on the list of starting-caliber prospects, then we have surrendered to groupthink. Which is another thing the professionals who run NFL teams do all the time.

The statistical breakdowns of all the 2021 draft quarterback prospects’ rushing and RPO data bring us right back to where we started. Willis is gifted but unready. Pickett and Ridder are experienced and do some things well but lack va-va-voom factor. Howell is this class’ designated option guy, Strong the flypaper for Mike Mayock types.

And Corral? He’s a [Paxton] Lynch- gold [Blaine] Gabbert-style system quarterback, just in a different system. His RPO breakdowns are warning us that he will max out as a feisty NFL backup.

A lot of Eagles fans likely wouldn’t be too thrilled if the team spent a pick on a quarterback this year. But the QB Factory never sleeps. And if the Eagles were willing to select Jalen Hurts when they already believed in Carson Wentz, it’s hardly unthinkable that they’d take a chance on a prospect this year. Using a first-round pick on Corral feels like a tough sell … but might he be in play if he falls into the second round?

The feeling here is that, while far from an easy projection, Corral offers intriguing upside.

Small quarterback with a big heart who has learned to play with better maturity and control without losing his edge. Corral played in a quarterback-friendly scheme with well-defined reads, so he needs to prove he can work through full-field progressions and make good decisions with the ball. He’s decisive, operating with a quick-trigger release to challenge tight windows and possesses the touch to make challenging bucket throws. He’s a fiercely competitive runner but needs to get his slide game up as he’s not built to take the pounding from called runs or scrambles. Corral is mobile, but his poise and accuracy wane when forced to move. Discipline has benefitted Corral and he’s clearly at his best when operating on-schedule and in rhythm. A spread-based scheme and a player-friendly head coach gives Corral the best opportunity to live up to his potential and challenge to become the best QB from this draft class.