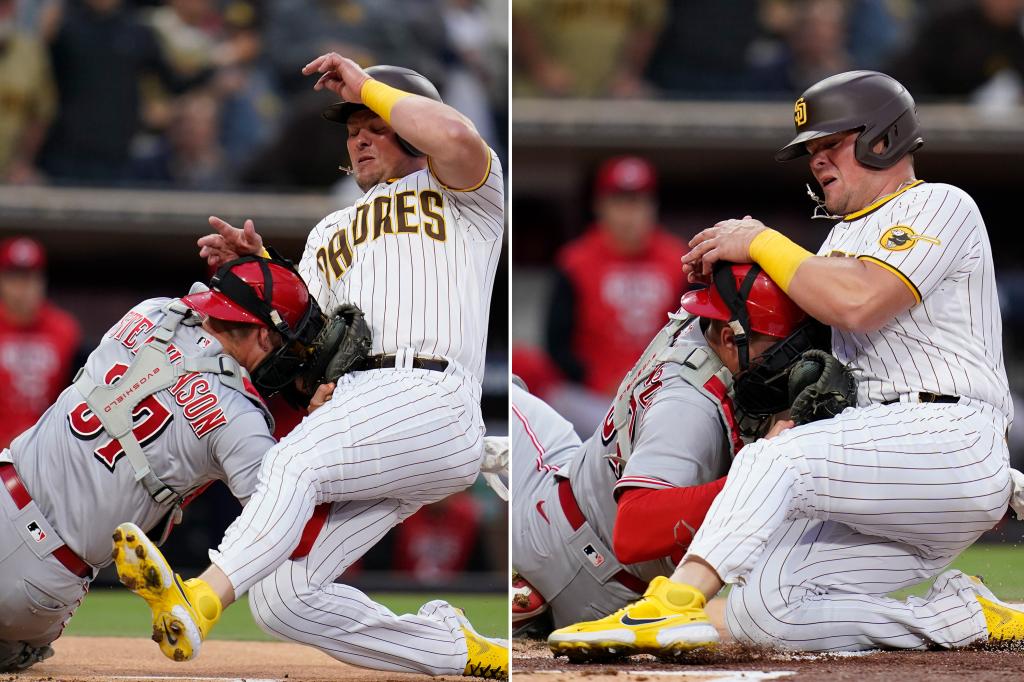 Tyler Stephenson tweeted all that matters is he got the out at the plate. His Reds teammates disagree.

Stephenson was placed on the concussion list following a collision at home with Luke Voit in Tuesday night’s Reds-Padres game. See, the former Yankee who was traded to San Diego last month, slammed his arms into Stephenson’s head as he slid into home, causing a collision. Upon review, umpires ruled the slide was clean but the Reds took issue with the play nonetheless.

“The way his hands hit him, it was dirty as f–k,” outfielder Tommy Pham told reporters. “I don’t like it at all. The way [Voit’s] hands hit [Stephenson] in the face, it was dirty.

“If Luke wants to settle it, I get down really well. Anything — Muay Thai, whatever. I’ve got a [gym] owner here who will let me use the facility.”

Stephenson left the game following the collision. Reds manager David Bell said he didn’t have an issue with the play, but it was scary to see Stephenson on the ground afterward.

The Padres went on to win the game, 6-2 — the eighth straight loss for the Reds. Pham wasn’t the only Reds player to take issue with Voit.

“Looking back at the replay, I’m not too happy about the slide,” shortstop Kyle Farmer said. “Not too often you see a runner slide and grab someone’s head and slam it to the ground like that. You’re usually trying to reach for the bag. Maybe that’s what he was trying to do. After looking at the replay, it looked like a wrestling move to Tyler’s head and snapped it down.

“I’ve caught before and it’s a scary play, especially when you have a big guy like Voit coming down. I’ve never really seen someone’s hands go to a catcher’s head on a slide.”

Pham seemed quite willing to settle the situation with hands.

“I don’t like it at all,” Pham said. “They can say what they want. Everybody on that side—they know I get down. I know a place here, I know an owner who will let me use his gym if we need to settle anything. … That play was dirty.”