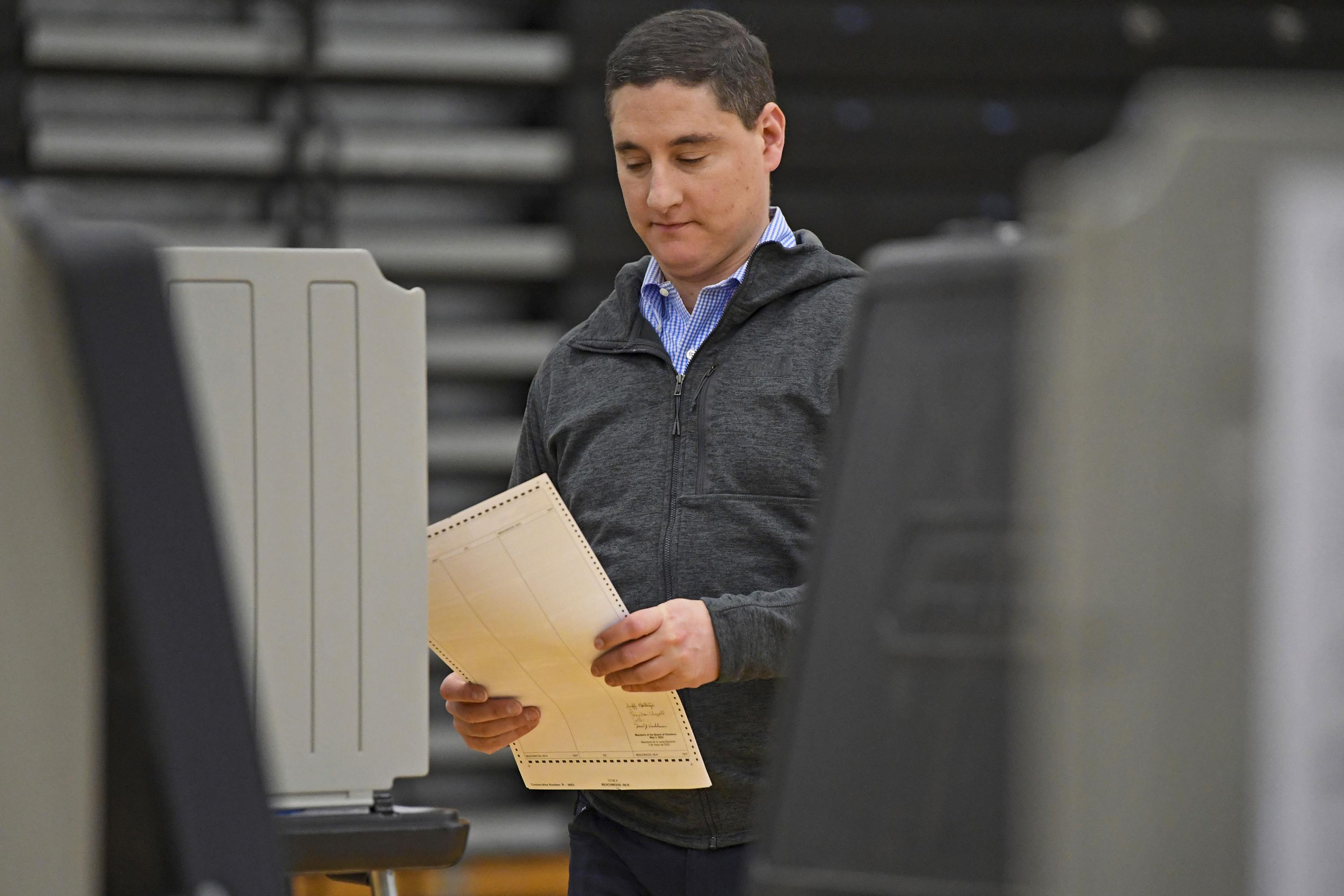 COLUMBUS, Ohio (AP) — Ohio Republicans voted Tuesday in one of the most contentious and closely watched Senate primaries in the US, deciding a race that is an early referendum on former President Donald Trump’s hold on the GOP as the midterm primary season kicks into high gear.

Author and venture capitalist JD Vance is well-positioned in the Republican race to replace retiring Sen. Rob Portman after receiving Trump’s late-stage supportcapping a bitter and expensive contest that, at one point, saw two candidates nearly come to blows we discussed stage. The winner is likely to face 10-term Democratic Rep. Tim Ryanwho has distanced himself from the progressive wing of his party ahead of what is expected to be a difficult year for Democrats seeking to hold their congressional majorities.

Incumbent Republican Gov. Mike DeWine appears on track to secure his party’s nomination for another term, despite backlash from conservatives over COVID-19 shutdowns and mandates. Meanwhile, in Indiana, more than a dozen state House members are trying to hold off Republican primary challengers who want to push the Legislature further to the right.

This marks the first multistate contest of the 2022 campaign and comes in the wake of a draft opinion that suggests the US Supreme Court could be poised to overturn the 1973 landmark Roe v. Wade case that legalized abortion nationwide. Such a decision could have a dramatic impact on the course of the midterms, when control of Congress, governor’s mansions and key elections offices are at stake.

The primaries also serve as a clarifying test of Trump’s influence in his party. A Vance victory would likely embolden Trump to keep asserting himself in primary campaigns ahead of another potential presidential run. A setback, however, would raise questions about whether GOP voters are seeking a new direction, especially in a state he won twice by margins of 8 percentage points.

At the Strongsville library in suburban Cleveland, 84—year-old George Clark said he voted for Vance based on Trump’s endorsement.

But Joanne Mondak, 71, said she voted for state Sen. Matt Dolan, the only major candidate who did not aggressively court Trump. The rest of the field, she said, are “nutcakes” who are “too much Trump.”

Trump reminded Ohio voters Tuesday his stake in the race.

Calling into a Columbus radio show, Trump praised Vance, and defended him for once calling himself a “never Trump guy.” Vance has since become “a very pro-Trump and America First” supporter.

Vance was trailing in the polls until the former president backed the “Hillbilly Elegy” author and one-time Trump critic in a contest that revolved largely around him. While the timing of Trump’s endorsement — less than three weeks before Election Day and as early voting was already underway — may have dulled its impact, it was a major blow to form Ohio Treasurer Josh Mandel, Cleveland investment banker Mike Gibbons and form Ohio Republican Party Chair Jane Timken, who had all gone to elaborate lengths to court Trump and his voters.

The race will also go down as the most expensive in state history, with more than $66 million in TV and radio spending alone, according to the Columbus-based Medium Buying firm.

Ohio, once a bellwether state, is now decidedly Republican, posing a challenge for Ryan, who is heavily favored to win his three-way Democratic primary against progressive Morgan Harper, a former consumer protection attorney, and Columbus activist and tech exec Traci Johnson. The longtime congressman and 2020 presidential candidate has fashioned himself as a blue-collar crusader fighting for working families as he has campaigned dressed in sweatshirts and baseball caps.

“He’s passionate about fighting for the people of Ohio,” said Michigan Sen. Gary Peters, who leads the Democrats’ Senate campaign arm. “The only person that Republican candidate(s) seem to care about is Donald Trump and whether or not Donald Trump will endorse them.”

While DeWine is strongly positioned to win a second term, he is expected to face considerable conservative backlash for the aggressive COVID-19 mandates he imposed during the first year of the pandemic. DeWine’s three opponents — forming US Rep. Jim Renacci, former state Rep. Ron Hood and farmer Joe Blystone — have all tapped into that anger, but they are likely to split the far-right vote. Still, DeWine isn’t taking chances and has poured millions into advertising during the race’s final weeks. Trump-backed Secretary of State Frank LaRose in also considered well positioned to win.

On the Democratic side, Nan Whaley, the former mayor of Dayton, is vying to become Ohio’s first woman elected governor in her race against ex-Cincinnati Mayor John Cranley. Whaley has the support of US Sen. Sherrod Brown, a popular household name and the state’s top Democrat. Cranley has the backing of feminist icon Gloria Steinem.

In the House, Republican Max Miller, a former Trump campaign and White House aide, is expected to cruise to the GOP nomination in the sprawling new 7th District in northeast Ohio, despite allegations from his ex-girlfriend, former White House press secretary Stephanie Grisham , that he grew violent with her as their relationship deteriorated. He has denied the charges.

Miller was initially recruited to challenge Republican Rep. Anthony Gonzalez, one of the 10 House Republicans who voted in favor of Trump’s impeachment. But González chose to retire instead.

For Democrats, a rematch pitting one of the left’s rising stars against a new House incumbent will provide another litmus test of the progressive movement’s rustbelt clout. Rep. Shontel Brown is again facing progressive activist and former state Sen. Nina Turner, whom she defeated in a special election last year.