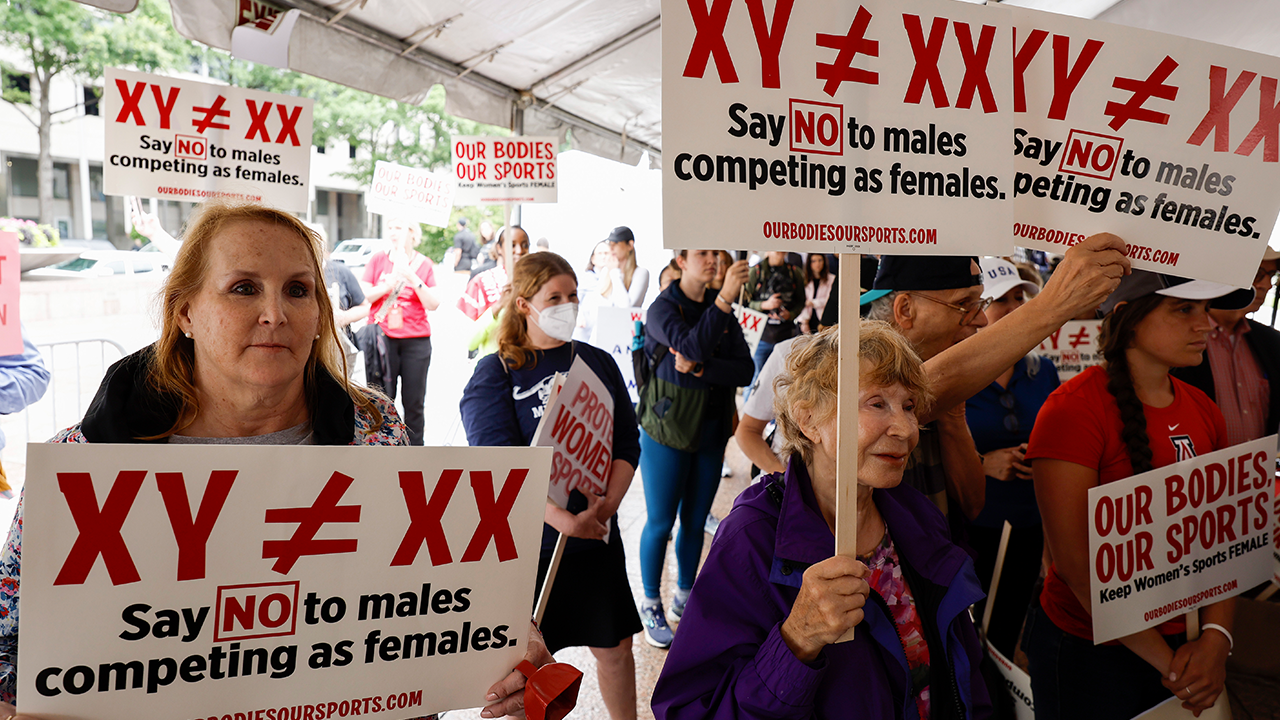 After the Biden administration announced new Title IX rules Thursday, lawmakers reacted to the proposed changes, with Democrats applauding the efforts, and Republicans sounding the alarm on the consequences of the new regulations.

The newly proposed Title IX rules would sweep gender identity into the law’s protections, and “strengthen protections for LGBTQIA+ students who face discrimination based on sexual orientation or gender identity,” according to the Department of Education.

Sen. Tom Cotton, R-Ark., warned of the consequences of the proposed changes.

“If you don’t conform to the left’s new gender ideologies, you could lose your job or get kicked out of school,” Cotton told Fox News Digital. “That’s what President Biden’s return to Obama’s Title IX means for students and faculty around the country.”

Students from James Madison University take part in a rally outside the Education Department in Washington, Thursday, Nov. 2, 2006. Earlier in 2006, James Madison announced that it would drop 10 of its athletic teams in order to bring the school into compliance with the federal law demanding equity in male and female sports.
(AP Photo/Ron Edmonds, File)

Rep. Suzanne Bonamici, D-Ore., had a different take on the proposed rule, calling it “long overdue” and “a welcome departure from the previous Administration’s discriminatory and harmful misinterpretation of the law.”

“Today, on the 50th anniversary of Title IX, the Biden Administration’s new regulation restores the original intent of this foundational law by guaranteeing all students equal access to educational opportunities, programs, and activities regardless of sexual orientation or gender identity,” Bonamici said in a statement.

“Regardless of the radical propaganda being pushed by the left, God created men and women differently from a physical standpoint, and that’s a biological fact,” Blackburn told Fox News Digital. “Now, female athletes like Riley Gaines, who have dedicated their entire lives to a sport, are being defeated by a competitor that was a man just three years ago. Joe Biden’s vision for female sports will result in two teams – one team of men and another team of folks that used to be men. We should champion biological women and their historical achievements, not implement revisionist biology and destroy their records.”

University of Pennsylvania swimmer Lia Thomas and Kentucky swimmer Riley Gaines react after finishing tied for 5th in the 200 Freestyle finals at the NCAA Swimming and Diving Championships on March 18th, 2022 at the McAuley Aquatic Center in Atlanta Georgia.
(Rich von Biberstein/Icon Sportswire via Getty Images)

Rep. Greg Steube, R-Fla., told Fox News Digital “President Biden’s reversal of Title IX is a slap in the face to every female athlete in this nation. It cancels biological sex – on teams, in locker rooms, in dorms, and in selections. It’s more important than ever that we use the democratic process in Congress to pass the Protection of Women and Girls scholarship in Sports Act and fight against this backwards proposal from this White House.”

The Protection of Women and Girls in Sports Act of 2021, which is sponsored by Steube, would make it illegal for a recipient of federal funds to permit a biological male from participating in athletic programs or activities designated for women and girls. The legislation was introduced in both the House and Senate earlier this year, but has not passed either chamber.

Sen. Steve Daines, R-Montana, told Fox News Digital, “On the 50th anniversary of Title IX, the Democrats have decided to push their damaging gender ideology in American schools – they are waging a woke war on women and girls.”

Demonstrators listen to the speaking program during an “Our Bodies, Our Sports” rally for the 50th anniversary of Title IX at Freedom Plaza on June 23, 2022 in Washington, DC.

Biden’s changes to Title IX were announced on the 50th anniversary of the landmark legislation, which was passed into law in 1972 and prohibited sex-based discrimination in schools that receive federal funding.

Rep. August Pfluger, R-Texas, told Fox News Digital, “As a father of three girls, I want my daughters to have every opportunity possible to pursue their dreams and achieve their goals. Allowing biological males to compete against women is an attack on equality for women in sports.”

Rep. Jackie Speier, D-Calif., said in a statement that Biden’s proposed rules “have restored the integrity of this landmark civil rights law for our students so that they can learn, grow, and thrive in educational environments free of sexual harassment, sexual assault , and sex-based discrimination.”

Biden’s proposed rule now faces a public feedback period before the changes are finalized, and will likely face strong pushback from conservatives.

Kelsey Koberg is an Editor with Fox News Digital. Story tips can be sent to kelsey.koberg@fox.com and on Twitter: @KelseyKoberg.