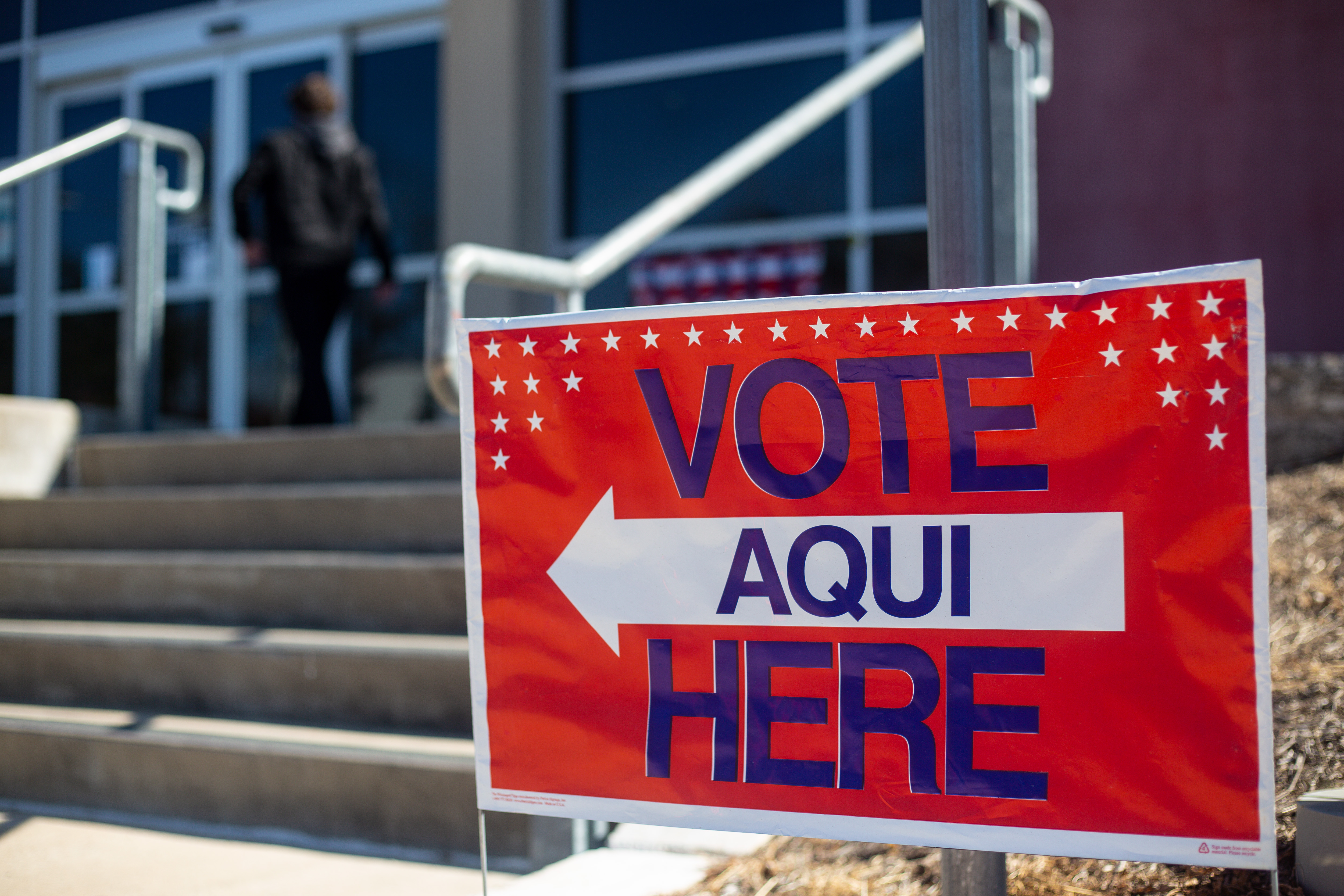 The Democratic Congressional Campaign Committee and its allies, meanwhile, only made a small investment at the end, despite requests from members to get involved earlier.

“I hope the DCCC learns their lesson with this before it happens across the country,” said Democratic Rep. Vicente Gonzálezwho due to redistricting will face GOP Rep.-elect Mayra Flores this fall in a redrawn district.

“They have just forgotten about the brown people on the border,” Gonzalez continued. “And that’s basically what it is. I’m not going to try to sugarcoat it anymore. They are taking Latinos in South Texas for granted.”

When the House convened Wednesday afternoon, several members approached DCCC Chair Sean Patrick Maloney. Democratic Reps. Sylvia Garcia and Veronica Escobar, whose Texas districts are also predominantly Latino, were among them. Garcia said she requested a meeting next week and that Escobar, Gonzalez and fellow Democratic Reps. Henry Cuellar and Joaquin Castro all plan to attend.

“I don’t know that it’s an intervention, but it’s gonna be a hard talk,” she said. “It’s going to be a good, healthy family discussion.”

González isn’t waiting until next week. He stopped Maloney for a one-on-one conversation on the steps of the Capitol, where he could be heard pleading for the party to step up its investment in a region increasingly skewing toward Republicans — and he warned that the loss could have been prevented .

Senior Democrats, including Maloney, say the situation is more complicated. They argue the GOP spent heavily for a symbolic, short-lived victory because the seat will disappear due to a redistricting quirk. The new version of the district will be much more winnable for Democrats.

“Look, I think the Republicans spent millions of dollars to win a seat that’s going away. We’re going to win this seat when it matters,” Maloney said in a brief interview. “You never like to lose, and I understand why people were upset by that. I think Republicans burned a lot of money, and we’re going to end up with that seat.”

But while the loss of this soon-to-disappear version of Texas’ 34th district is temporary, the trend it represents is growing more and more concerning for Democrats. The resounding win by Flores — a health practitioner and wife of a border patrol agent — marks the first flip of the midterm cycle for Republicans, and it also hands them a unique messenger as the GOP looks to capture more border and majority-Latino districts in November.

Republicans seized on the victory, declaring it a preview of Democratic losses to come in November — particularly in their one-time stronghold in South Texas. Not only did Flores handily defeat the Democrats’ candidate, Dan Sanchez, but she also showed how far the GOP has encroached on formerly blue territory in just a few years. In a handful of counties, Flores ran dozens of points ahead of Trump’s marks in his first bid for office in 2016. She even narrowly carried Cameron County, a longtime base of Democratic support.

Republicans across the state were jubilant: “South Texas has been a Democrat stronghold for over a century. To see South Texas move Republican is a seismic shift,” Sen. Ted Cruz (R-Texas) said in a brief interview after Flores, whom he endorsed, won.

Democratic leaders said the GOP’s win was unfortunate — but stressed that the DCCC must be selective about where and when it will invest, especially given the current districts will only exist for the next few months.

“I think we made the judgment that it was pretty much a Republican seat,” House Majority Leader Steny Hoyer said in a brief interview when asked about the party’s decision not to prioritize the race. When asked if the party would spend significantly there in November, he said, “We’re going to invest heavily in every seat we think we can win.”

Even so, many rank-and-file Democrats, particularly Latinos, were outraged that their party had missed an opportunity to gain ground with voters that were moving away.

“The moment you start getting people to say, ‘Well, it’s ok to vote Republican,’ then the next time will be easier,” said Cuellar, who will be defending his own South Texas turf in November against what’s expected to be an onslaught of GOP spending.

“The DCCC needs to sit down and look at South Texas seriously,” Cuellar said. “I don’t think it’s a political realignment, but this should send a message to the DCCC … You can’t take Hispanics for granted, which they always do.”

Most Democrats still believe that Gonzalez can keep the redrawn version of the seat in November, but they worry the GOP’s victory this week will provide a huge moral boost that will be hard to undo.

“The DNC, the DCCC and all the Democratic national groups really need to take a hard look at what happened,” Garcia said. “I realize this is a special, but it’s still given the Republicans a narrative to say: ‘We flipped a seat.’ And we should have done better.”

It was a sentiment felt across the Texas Democratic delegation.

“There is absolutely no logical reason why we should be losing any of these seats,” Escobar said, while lamenting the DCCC’s decision not to spend in the race.

“I don’t agree with that strategy,” she said. “I think it’s always important to invest in elections like that because I think there are consequences to that narrative. And it’s deeply concerning to me.”

National Democrats didn’t entirely ignore the special election: House Majority PAC, a super PAC with close ties to Speaker Nancy Pelosi, made a six-figure buy one week before the election. But many Democrats felt it came too late, and some privately complained that the ad attempted to tie Flores to conspiracy theories related to the Jan. 6 insurrection in the US Capitol.

Republicans pounced on what they saw as an obvious Democratic messaging flop.

“Our guys were talking about inflation and the economy and crime and the border. What were they talking about? Jan. 6,” said Rep. Tom Emmer (R-Minn.), who runs the House GOP’s campaign arm.

“The border’s a big deal, and they’re not doing anything about it,” the National Republican Congressional Committee chief said. “We are actually more in touch with the voters than our colleagues on the other side of the aisle.”

Republican polling of the district, conducted in mid-May by Meeting Street Insights, found that the most important issue for voters was border security and immigration (35 percent), followed by inflation (28 percent).

Flores and GOP outside groups slammed Democrats as having a weak border security policy that has led to more crime in the region.

“I think our historic disinvestment caught up to us,” said Rep. Chuy Garcia (D-Ill.), who represents a majority-Latino district in the Chicago area. “We’re on our heels, and we need to invest heavily.”

The GOP’s latest surge in South Texas comes as alarm bells were already ringing for Democrats.

House Republicans were shocked in November 2020 at what happened along the Texas border. Three Rio Grande Valley districts that Hillary Clinton had won by double-digits only narrowly backed President Joe Biden four years later. Gonzalez just squeaked by in his bid for re-election in his McAllen-based district.

In 2022, Republicans planned to target all three of those districts, held by Gonzalez and Democratic Reps. Filemon Vela and Cuellar.

Vela gave them an early opportunity when he announced he would resign from Congress before the end of his term, prompting a special election in his district under the current lines. The GOP seized its luck.

The NRCC polled the district in April and found Flores leading Sanchez by 5 points, with 41 percent undecided. The committee helped Flores raise $231,500 in donations from Republican members of Congress. And working with the Texas GOP, the NRCC pumped $1.1 million into the district across multiple platforms.

The committee spent $200,000 on a coordinated TV ad buy with the Flores campaign, while the state party made a large transfer. Both groups invested in get-out-the-vote efforts, including digital ads, texting and robocalls. The Congressional Leadership Fund, the top House GOP super PAC, polled in mid-May and found Flores at 34 percent. It then invested some $200,000 on digital and TV to increase its profile.

Republicans concede the district will become harder in the fall. But they are thrilled to have Flores as a strong ambassador for the GOP’s values ​​in new territory.

“You have a spokesperson who happens to be Hispanic, female and from the Valley,” said Rep. Jodey Arrington (R-Texas), who joined Flores to campaign.

“I can go down and I can have the same message,” he said. “But I think it is much more powerful and much more palatable and attractive, and some people who would tune me out will give her just enough time.”