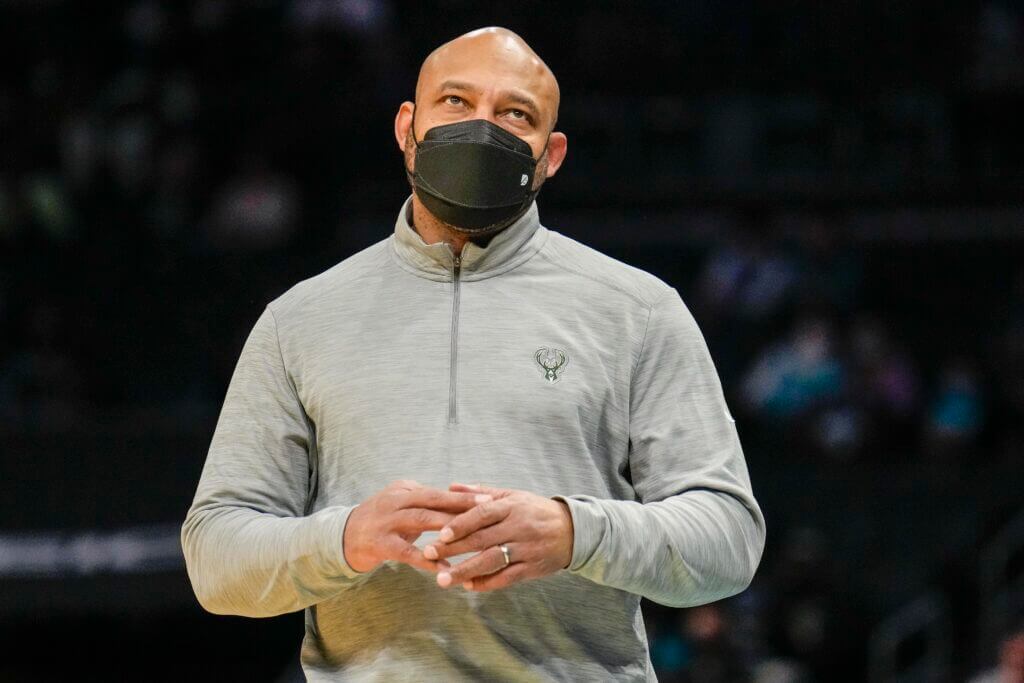 The Lakers appear poised to make a decision on their coaching position soon, with Milwaukee Bucks assistant Darvin Ham, Golden State Warriors assistant Kenny Atkinson and former Portland Trail Blazers coach Terry Stotts the finalists for the job that became vacant when Frank Vogel was fired at season’s end. But as the final round of interviews is set, sources tell The Athletic that Ham appears to have made the strongest impression yet.

Now, the final stage of the process will determine who secures the job. Among the final group, Stotts is known for his strong X’s and O’s, making the postseason in eight of nine seasons in Portland, while Atkinson has been described as a sharp mind and tireless worker.

In terms of the Lakers’ preferences, sources say team officials have prioritized a coach who can command respect and authority from the locker room and who has a strong enough presence and voice to manage the varying roles and relationships across the roster. Those characteristics bode well for Ham’s candidacy. Throughout assistant coaching stops with the Lakers, Hawks and Bucks, Ham has been known for his no-nonsense style and ability to resonate with his players — attributes that have stood out in his communication with the Lakers thus far as well, sources said.

Ham, who played in eight NBA seasons from 1996 to 2008, is the only former NBA player among the three finalists. Even before he reached the NBA, however, Ham’s reputation as a force of nature was cemented when he broke the backboard while dunking during his 1996 NCAA Tournament run with Texas Tech. Ham, Stotts and Atkinson are in consideration for the Charlotte Hornets vacancy as well. Ham is also a serious candidate for the Hornets, according to sources.

The Lakers have interviewed a total of six candidates, including Bucks assistant Charles Lee, Raptors assistant Adrian Griffin and former Warriors coach Mark Jackson. Lee and Griffin have not been ruled out as options as part of the process, sources said.

“In terms of what this team needs right now, we feel like obviously with superstars on our team, we want a strong voice that is able to inspire the players to play at the highest level of competition every night,” Pelinka said about the coaching search on April 11. “I think that’s going to be one of the resounding qualities that we look for, in terms of holding everybody from the top player on our team to the 15th man to a degree of accountability, and that’s going to be one of the many characteristics that jumps out today.”

Yet after all the recent discussion about influential voices in Laker Land, with Jeanie Buss known to be leaning on Phil Jackson and Magic Johnson as she attempts to course-correct from a 2021-22 season that was such a debacle, it’s fair to wonder who is making the decision here. A source with direct knowledge of the process shared the following insight on this front with The Athletic:

It’s only Lakers officials — none of whom are named LeBron James. While it’s known that James would have been enthused by the prospect of Mark Jackson getting the nod here, that obviously won’t be the case.

For the sake of context, it’s worth hitting the rewind button to the Lakers’ last coaching search three years ago. After narrowing their list to Monty Williams, Ty Lue and Juwan Howard, they ultimately wound up going with Frank Vogel for a variety of well-chronicled reasons. In those final interviews, Pelinka was joined by Jeanie Buss, Kurt and Linda Rambis, COO Tim Harris, Joey Buss and Jesse Buss.

• Considering the many unflattering storylines that have surrounded the Lakers in recent years, from Magic’s messy exit in April 2019 to Jerry West deeming them at “shitshow” in December 2020 to the “I haven’t been told shit” Vogel firing that was executed so poorly, Jeanie Buss is determined to assuage any and all of the finalists’ concerns about the organization during this final stage. Her message, the source said, would focus on an organizational commitment to providing both the resources and internal support needed to inspire team success.

• The Russell Westbrook factor continues to loom large here. Candidates have been asked to discuss how they would use a roster that includes Westbrook, with Lakers officials operating under the belief he will be part of their program next season. Westbrook has a player option worth $47 million for the 2022-23 campaign.

As for the prospect of Westbrook being waived or sent home (a la Houston’s John Wall last season) if he is not traded, those are not considered viable options, and all indications are that he will play. With that in mind, the Lakers are focused on hiring a coach who is capable of navigating these types of sensitive situations.

—The Athletic‘s Bill Oram contributed to this report.