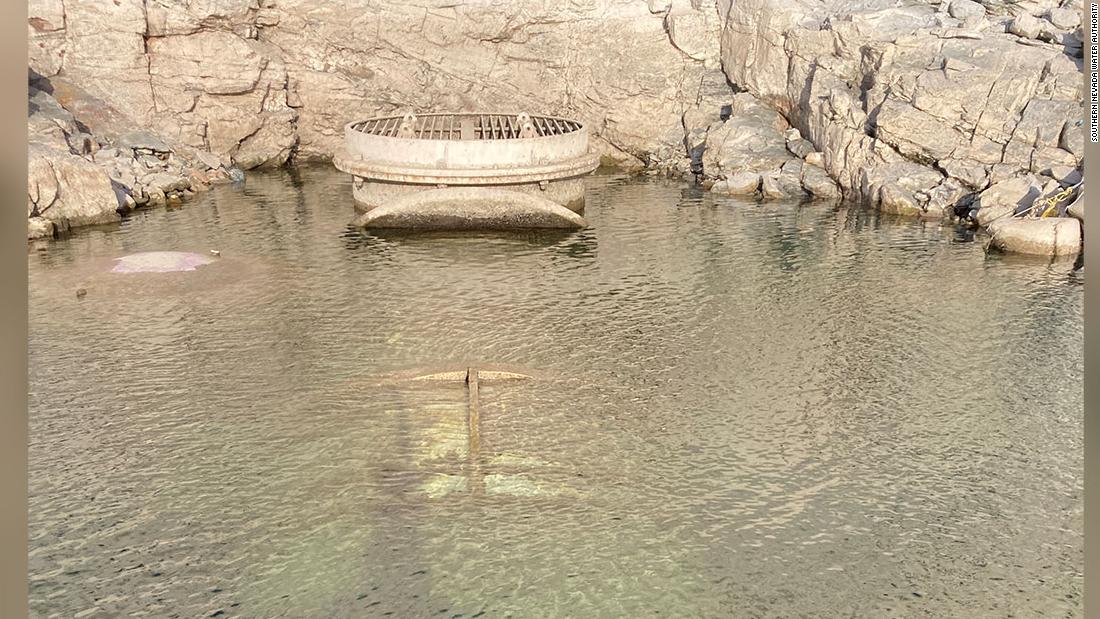 The lake’s plummeting water level has exposed one of the reservoir’s original water intake valves for the first time, officials say.

The valve had been in service since 1971 but can no longer draw water, according to the Southern Nevada Water Authority, which is responsible for managing water resources for 2.2 million people in Southern Nevada, including Las Vegas.

Across the West, extreme drought is already taking a toll this year and summertime heat hasn’t even arrived yet.

“This is a crisis. This is unprecedented,” said Adel Hagekhalil, general manager of the Metropolitan Water District of Southern California. “We have never done anything like this before and because we haven’t seen this situation happen like this before. We don’t have enough water to meet normal demands for the six million people living in the State Water Project dependent areas.”

At Lake Mead, photos taken Monday show the oldest of the agency’s three intake valves high and dry above the water line.

“When the lake hit 1060 (feet above sea level), that’s when you could start to see the top of the intake number one,” said Bronson Mack, public outreach officer for the Southern Nevada Water Authority.

As a result, the water authority has begun operating new, low-lake pumping station for the first time — a valve situated deeper at the bottom of Lake Mead. The station, which began construction in 2015 and was completed in 2020, is capable of delivering water with the lake at a much lower level, and was built to protect the region’s water resource in light of worsening drought.

“There was no impact to operation’s ability to deliver water,” Mack said. “Customers didn’t notice anything. It was a seamless transition.”

Water flowing down the Colorado River fills Lake Mead and Lake Powell — another critical reservoir in the West — and the river system supports more than 40 million people living across seven Western states and Mexico. Both reservoirs provide drinking water and irrigation for many communities across the region, including rural farms, ranches and native communities.

The federal government declared a water shortage on the Colorado River for the first time last summer. The shortage triggered mandatory water consumption cuts for states in the Southwest, which began in January.
And in March, Lake Powell dropped below a critical threshold that threatens the Glen Canyon Dam’s ability to generate power.

The West is in its worst drought in centuries, scientists reported Monday. A study published in February found the period from 2000 to 2021 was the driest in for the region 1,200 years.

The human-caused climate crisis has made the West’s megadrought 72% worse, the study noted.

“We’re kind of in some uncharted territory, socially and economically,” Justin Mankin, assistant professor of geography at Dartmouth College and co-lead of the National Oceanic and Atmospheric Administration’s Draft Task Force, told CNN in March.