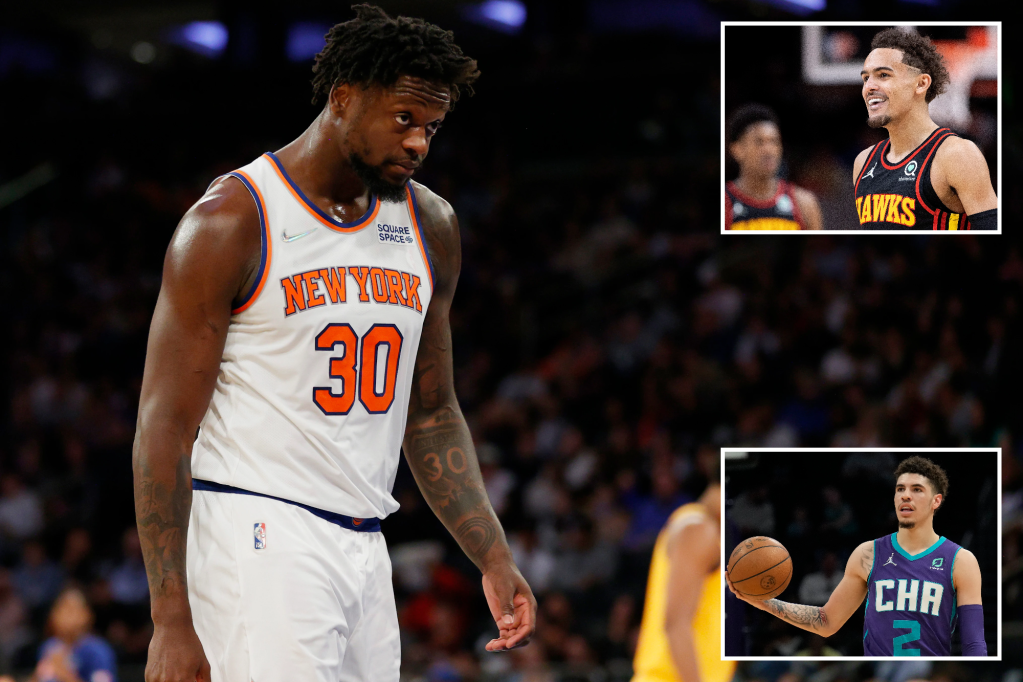 With 11 games to play, the Knicks will have to run the table to finish with a .500 record.

The Knicks won’t quite need to be that perfect to make the play-in tournament if the Hawks and Hornets fall down the homestretch.

The Knicks get to see their two most important foes with a Tuesday-Wednesday back-to-back versus Atlanta and Charlotte. They are two games that could end any chances of continuing a long-shot pursuit of the play-in event and one loss will secure their eighth losing season in nine years.

The Hawks, who advanced to the 2021 Eastern Conference Finals, are in a much more comfortable slot, in 10th place, five games ahead of the Knicks as Trae Young visits Tuesday.

The Knicks are six games behind Charlotte (36-35) and face the Hornets twice — Wednesday in the Queen City and March 30 at the Garden.

Knicks president Leon Rose has extra incentive to beat the Hornets, though, to ensure Charlotte’s protected first-round pick it gave to Atlanta for out-for-the-season Cam Reddish doesn’t convey in June. That would be one last salt tablet added to the Knicks’ multiple wounds.

“We’re going to go and try to win every single game,” RJ Barrett said of Atlanta. “They’re a team that’s ahead of us, so this will be a big opportunity for us.”

The Knicks blew a big opportunity versus Utah as they held an early nine-point lead and were within four points with 7:00 left in the fourth quarter before the Jazz turned it up and routed the Knicks by 15. The Knicks could’ve moved within four games entering Tuesday’s showdown.

“Blown opportunity?” Julius Randle said after the Utah loss. “It’s an opportunity. We didn’t meet the task. We came up short. Blown? I don’t consider it that.”

Randle hasn’t considered much in a season rife with temper flare-ups and missed 3-pointers.

The Knicks have shot 34.5 percent and 37 percent in their past two games, though their record is a respectable 5-3 in their last eight games.

It’s time to get extremely hot. Outside of Atlanta and two against Charlotte, the Knicks have games left Miami, Detroit, Chicago, Cleveland, Brooklyn, Washington and Toronto. Seven of their last 11 games are against teams with records above .500.

That’s a place the James Dolan-owned Knicks won’t get to for the eighth time in nine years.