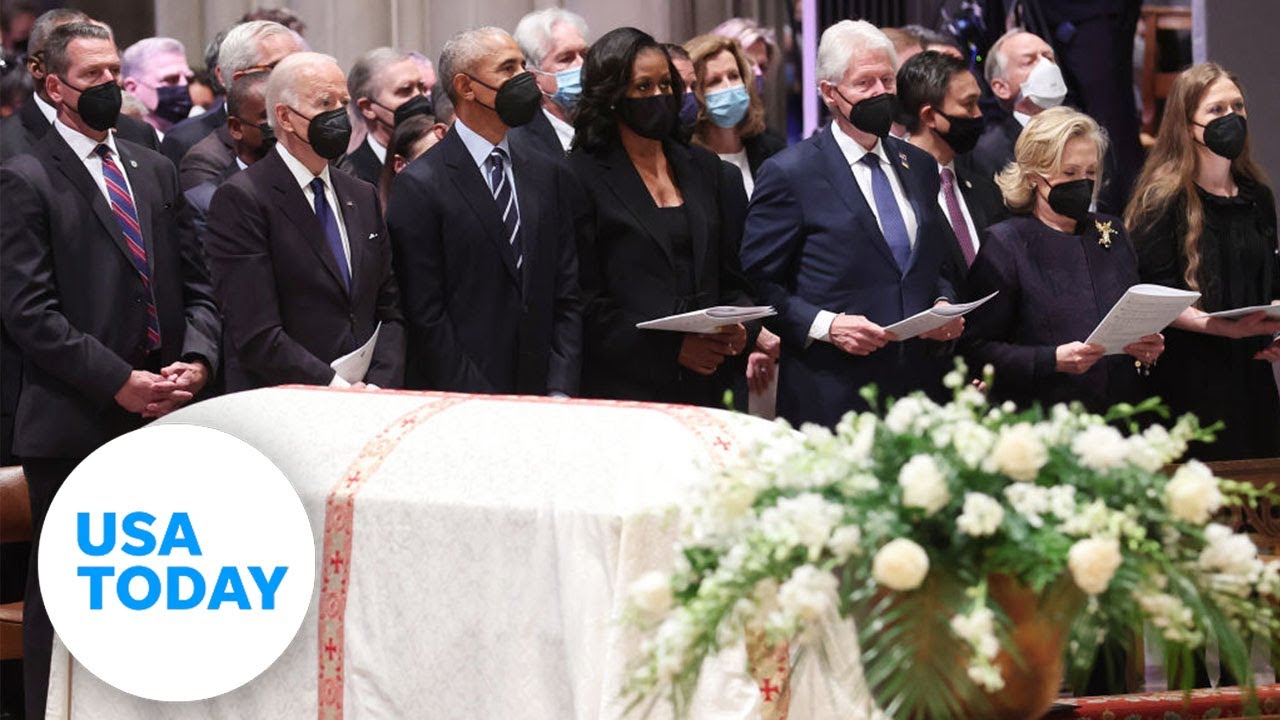 WASHINGTON — The nation’s most powerful Democrats for the past quarter-century, world leaders, friends and family of Madeleine Albright celebrated the life Wednesday of the nation’s first female secretary of state, who arrived in the US as a young girl from war-torn Czechoslovakia before becoming a trailblazing diplomat and national icon.

“In the 20th and 21st century, freedom had no greater champion than Madeleine Korbel Albright,” said President Joe Biden, eulogizing Albright at her funeral at Washington National Cathedral. He called Albright “a force of nature” who through “goodness, grace, humanity and intellect turned the tide of history.”

Albright died March 23 at 84 years old after a fight with cancer, leaving a legacy as a defender of democracy, human rights and peace. More than 1,400 people, each wearing face masks at the request of the Albright family, packed the cathedral.

They heard from Biden, former President Bill Clinton and former Secretary of State Hillary Clinton describe how Albright urged other women to “interrupt” and who, despite her small stature, wasn’t afraid to stand up to America’s biggest adversaries. They marveled at Albright’s courage and vast collection of chest pins, laughed about her dancing the tango and macarena, and said her journey from Europe after World War II embodied America.

“Madeline understood her story was America’s story,” Biden said. “She loved to speak about America as the indispensable nation. To her, the phrase was never a statement of arrogance. It was about gratitude for all this country made possible for her.”

Albright’s closed casket sat in the front of the chamber. Biden watched the service from the front row next to Barack Obama, Michelle Obama, the Clintons and daughter Chelsea Clinton and Al Gore – a group that represented seven of the past eight Democratic presidential nominees. The room was filled with Biden administration officials, current and former lawmakers, and an array of past and current diplomats.

‘It was so perfectly Madeleine,’ Bill Clinton says of last conversation

Bill Clinton, who nominated Albright as the 64th secretary of state shortly after his 1996 re-election, recalled his last conversation with Albright two weeks before she died. He asked her how she was feeling, but she was more interested in talking about the future of the world in light of Russia’s invasion of Ukraine and the state of democracy.

“‘The only thing that really matters is what kind of world we’re going to leave to our grandchildren,'” Albright told Clinton, the former president recalled. “I will never forget that conversation as long as I live. It was so perfectly Madeleine.

He added: “That question is kind of up in the air, but not because of Madeleine Albright. I was honored to be a part of her life for more than 30 years.”

Woman of the Century:Madeleine Albright talks about how she became secretary of state, speaking up as a woman and the importance of calling out wrongs

Clinton credited Albright, who was previously his ambassador to the United Nations, with helping to stop genocide in Kosovo, where peace has now maintained for 26 years, and for her leadership in the war in Bosnia Herzegovina. In attendance for the funeral was Salome Zourabichvili, president of Georgia, Vjosa Osmani-Sadriu, president of Kosovo and Albin Kurti, prime minister of Kosovo.

Clinton said, “God gave her a fine mind and a wealth of experience for anyone who was willing to pay attention to it.” He said Albright “made the most of it, not just for herself, but for other people. She loved this country more than you will ever know.”

Albright knew what she was for and against, Clinton said, and held a political philosophy that differences among nations should be discussed, not fought over.

“Today we see in Ukraine all too tragically what Madeline always knew: that the advance of freedom neither inevitable or permanent, and that in politics, where the lure of power is strong and the temptation to abuse it is often irresistible, there are no permanent victories or defeats.”

“We love you, Madeleine,” Clinton said. “We miss you. But I pray to God, we never stop hearing you. Just sit on our shoulder and nag us to death ’til we do the right thing.”

Hillary Clinton tells an Albright lesson: ‘You have to interrupt’

As secretary of state, Albright was known as a supporter of military action in world affairs. She was the first US official to meet with Vladimir Putin after he became president of Russia in 2000. That same year, shortly before Clinton’s second-term ended, she traveled to North Korea to meet with Kim Jong Il, marking the first trip to North Korea by a US diplomat.

Hillary Clinton, who lost her 2016 bid to become the nation’s first woman president, said Albright “didn’t just help women. She spent her entire life counseling, cajoling, inspiring and lifting up so many of us who are here today.”

“Silence may be golden she told them,” Clinton said, “but it won’t win many arguments. You have to interrupt. When dictators dragged their feet or ambassadors filibustered, Madeline never hesitated to speak up. And just in case they didn’t get the message, she would put on a snail pin to signal her impatience.”

Hillary Clinton concluded her remarks joking that the angels in heaven better be “wearing their best pins and putting on their dancing shoes.”

“Because, as if Madeline believed, there’s a special place in hell for women who don’t support other women, they haven’t seen anyone like her yet.”

Last year, Albright eulogized former Secretary of State Colin Powell at his funeral, also held at Washington National Cathedral, in one of his last public appearances.

Obama awarded Albright the Presidential Medal of Freedom in 2012. After her diplomatic career, Albright, a businesswoman and author of several bestselling books, including three memoirs, became a symbol of female empowerment.

Opinion:Madeleine Albright made history, then insisted on helping other women make theirs.

3 daughters remember a mom, not just a diplomat

Born in Prague in 1937, Albright – then Madeleine Korbel – fled to England with her family in 1939, less than two weeks after Nazi Germany invaded Czechoslovakia. Though her family was of Jewish ancestry, she was raised Roman Catholic and learned only in 1997, at the time of her confirmation as secretary of state, that three of her grandparents died in the Holocaust.

Albright’s family lived in the cellar of an apartment in Notting Hill before returning to Prague after World War II. They moved to the US in 1948 after the communist takeover of Czechoslovakia. Her family settled in Denver, where her father worked as a dean of the school of international relations at the University of Denver.

Albright told USA TODAY in 2020 that she had “a trick” to make sure her position was clear in a foreign policy arena dominated by men.

“After too much of the small talk, I would say, ‘I have come a long way, so I must be frank.’ Then I really did make a point of what I needed to say,” she said. “I don’t think frankly that I was rougher, tougher or anything than any man. I just think people were surprised to hear that language from a woman.”

The ceremony’s final tributes came from Albright’s three daughters: Anne Albright, Alice Albright and Katherine Albright. Each took turns describing a side of Albright less familiar to those who knew her as the nation’s top diplomat. an avid knitter, a devoted teacher, a “cautious skier” on the Colorado slopes and a mother who always encouraged them to chase their dreams.

As little girls, Albright tugged them throughout their neighborhood in a wagon so they could sell Girl Scout cookies. Minutes before Albright was sworn in as secretary of state, she was sharing Tic Tac mints with them in a backroom. She later guided them around her native Prague.

“Mom never forgot where she came from and how precarious her circumstances were when she first arrived in the United States,” said Alice Albright, the middle daughter. “This explained why mom never took anything for granted and was always grateful for everything. She described herself as a ‘grateful America.’

“I miss you so much mom,” she said, tearing up, “and everything about you, and we will forever.”