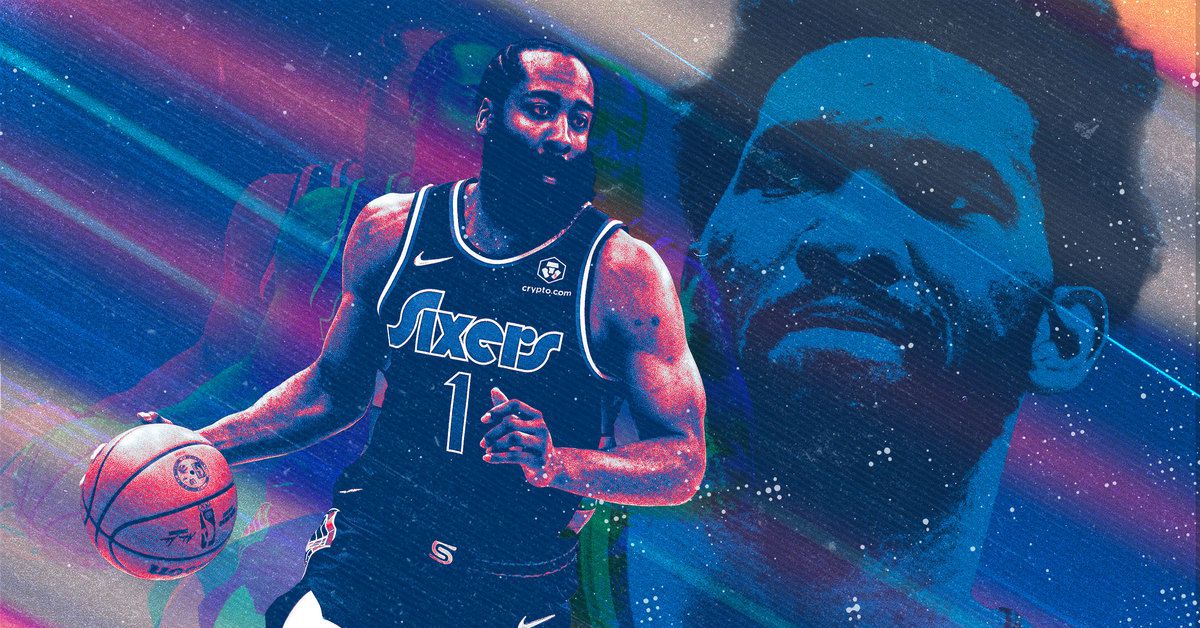 Joel Embiid was already playing with a ligament tear in the thumb of his shooting hand. Then, in the final minutes of Philly’s first-round series, he suffered a concussion and a fractured orbital bone, which will reportedly keep him out until at least Game 3 of the second round. That means the Sixers will need James Harden to turn back the clock against the Heat.

The once-revolutionary scorer has looked pretty ordinary of late. In the first round against the Raptors, Harden averaged only 19 points on 13.2 shots per game, paltry scoring numbers compared to his heyday in Houston when he led the league in scoring three times, won an MVP, and was the star of a team that made eight straight postseasons. During those years, he averaged 28.4 points on 20.4 shots. He also exploded and elevated in the paint a lot more than he does today:

The clips above are from Harden’s 2017-18 season and this year’s first-round series against Toronto. There’s a notable lack of verticality now compared to then, which also shows up in his numbers.

Harden is making only 33.3 percent of floaters this year, down from 46.7 percent over the past four seasons. When Harden gets into the paint, he lacks the bounce he had before, and he also now lacks a turbo first step when he drives to the rim. Second Spectrum tracks a stat called “blow bys” when a player drives to the rim. It’s in the name. During Harden’s last season in Houston, he blew by his defender on 48.2 percent of his drives on which he tried to score. This season, he’s down to just 33 percent.

Those types of statistical drops have transformed him from a generational outlier into just a regular All-Star. Even when he gets all the way to the basket now, the 32-year-old is making just 48.1 percent of his driving layups compared to 55.7 percent over the past four seasons. At this point in his career, teams aren’t as intimidated by Harden as they once were. They don’t panic when he’s isolated. Their defense doesn’t need to offer help quite as hard. And now Embiid, Harden’s security blanket since he arrived in Philly, will miss at least two critical playoff games and maybe more. That means the pressure will shift to Harden to pick up the load and carry the Sixers. The question is whether he still has enough juice to pull it off.

Harden is self-aware. Whether his decline is due to lingering hamstring issues, conditioning, or just age, he has adjusted his game to his present condition. Harden passes the ball 68 times per game, up more than 15 per game since he was with the Rockets, according to Second Spectrum. His scoring is way down since he left Houston, but his assists are up to 10.5 as a Sixer after averaging 7.7 as a Rocket. The fact that Harden is embracing this role suggests the next five years of his career will have him looking more like a pure point guard, which is what the Sixers really need. Ben Simmons was their point guard until the end of games, when he turned into a non-shooting center with an allergy for contact. Seth Curry is a great off-ball presence, but not a lead guy. Harden embraced the role, though. Except now, without Embiid, the Sixers need him to temporarily transform back into his former self.

The Heat just forced Trae Young into more turnovers than made shots in their first-round series against the Hawks. Erik Spoelstra mixed up coverages, but more often than not Miami switched a slew of effective defenders onto Trae regardless of what Atlanta came up with.

The play above was recently detailed by Nekias Duncan from Basketball News as an example of Miami’s defense at its best: PJ Tucker applies full-court pressure on Young, and then through a series of on-ball screens the Heat seamlessly switch Bam Adebayo and Jimmy Butler onto him before he gives the ball up. Bam, Butler, and Co. then contain Bogdan Bogdanovic and Kevin Huerter to force a turnover. Add in a deep group of guards and wings, and Miami has enough quality defenders to neutralize any offense.

Harden will see defense just like this starting in Game 1 on Monday. During the regular season against Miami, Harden was the ball handler for 39 pick-and-rolls. The Heat switched screens on 22 of them, according to Second Spectrum. Now Harden won’t have Embiid to dump the ball to anymore, though, and will be forced into more isolations, a former staple of his game:

Harden is generating 1.06 points per isolation, down from 1.14 the past four seasons. It’s just another number that’s indicative of his regressed play.

With Embiid out, the light will shine bright on Harden’s play and whether he’s able to pick up the scoring load, but the onus is on more than just him against the Heat. Tyrese Maxey, not Harden, took the most shots besides Embiid in the first round. Following his sensational sophomore season, his game has immediately translated to the playoffs, where he averaged 21.3 points in 42 minutes in the first round.

For the most part, Maxey excels playing off Harden and Embiid by sprinting in the open floor, cutting, and relocating.

Maxey scored 25 points in Philadelphia’s closeout win over Toronto, repeatedly pulling up from 3 off the dribble and forcing the defense to respect his shot. With more space to play, he attacked decisively to get into the paint. And since Harden runs the show, he tends to be defended by a weaker player. There will be more moments in the Heat series when Maxey needs to take the keys and create for himself.

The same goes for Tobias Harris, who’s a candidate to be defended by a smaller defender like Max Strus or Duncan Robinson in this series, depending on the lineups. The Hawks fed De’Andre Hunter against undersized Heat players in the last round.

For at least the first two games, we’ll also likely see more Paul Reed in Philly’s lineups. Charles Bassey also practiced on Saturday with the Sixers, so he could be available as a backup center. Unless Doc Rivers decides to roll with veteran DeAndre Jordan, much to the annoyance of Philadelphia fans, Harden will primarily operate with two younger bigs in the pick-and-roll. Harden and Reed linked up for just 40 pick-and-rolls this season. Bassey and Harden haven’t played together at all. Even Jordan has screened for Harden only 77 times. None of the pairings were all that efficient together.

Harden and Embiid generated 1.15 points per pick-and-roll, an incredible mark this season. Of the 35 combos who ran at least 500 pick-and-rolls, they were first in the entire NBA in efficiency, per Second Spectrum. While Harden’s scoring numbers have dropped off, this number serves as a reminder that when he’s at his best he’s still one of the NBA’s best lead ball handlers.

That’s why the Sixers got Harden. To run point guard. Last season, Embiid’s most frequent pick-and-roll partner was Tobias Harris (7.8 per game). His high-water mark with Ben Simmons came in 2017-18 with 4.9. And Embiid and Jimmy Butler logged just 6.5 per game.

Harden brings a new side out of Embiid, just as Maxey does. There’s been some questions about whether the Sixers should extend Harden, who is eligible for a four-year, $233 million deal this summer. The contract would pay him a whopping $61.7 million when he’s 38 in 2026-27, so he could become an albatross down the line. But with Embiid producing at an MVP level, there should be no question the Sixers will re-sign his pick-and-roll partner if he’s willing. He’s still one of the NBA’s best playmakers.