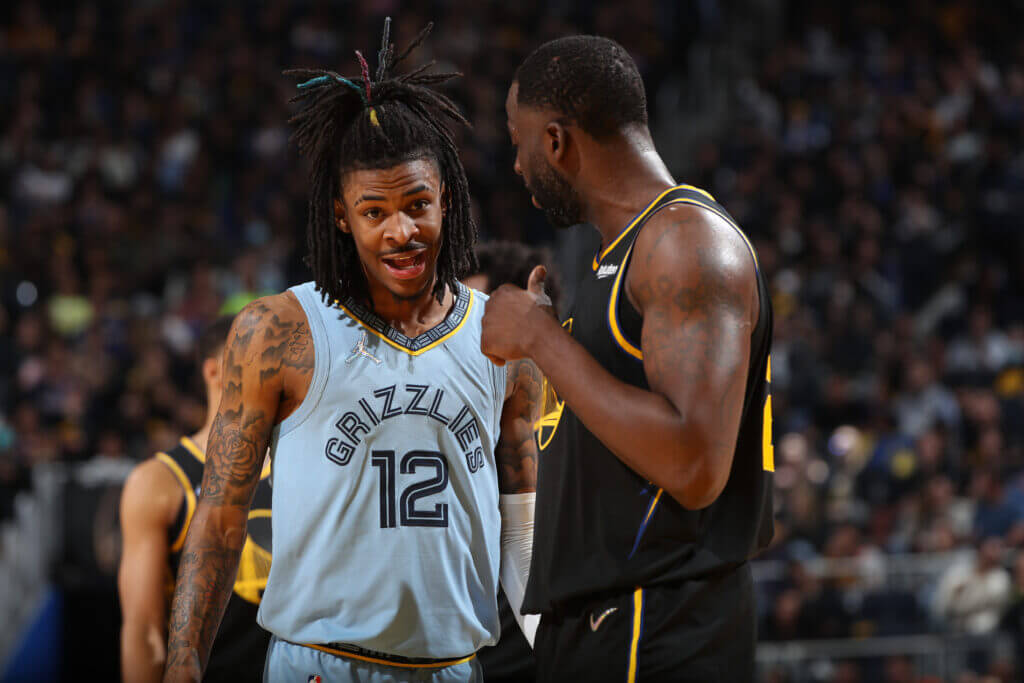 Ja Morant is quoting the Warriors’ words back at them. Grizzlies coach Taylor Jenkins is implying nefarious revenge. The Warriors are still upset about Dillon Brooks’ flagrant-2 foul on Gary Payton II. Jaren Jackson Jr. is dubbing this “the code” series.

There has been a sufficient amount of, as Klay Thompson calls it, “playoff talk.”

Things are getting contentious.

The energy began with a palm to Morant’s knee from Warriors guard Jordan Poole, a play that Jenkins called out following the Grizzlies’ 142-112 loss Saturday, which gave Golden State a 2-1 advantage in its second-round playoff series against Memphis.

“He was going after a dribble and Poole actually grabbed his knee and yanked it, which kinda triggered whatever happened,” Jenkins said. “So, I’m actually gonna be very curious to see what happens after that.”

Morant had limped off the floor with an apparent knee injury with 6 minutes, 19 seconds left in the game, which had already gotten out of hand. The injury occurred just before that when Poole and Andrew Wiggins trapped the All-Star guard near half court. While reaching for the ball, Poole caught Morant’s knee.

Team doctors evaluated Morant after the game, but the Grizzlies did not provide any update on the injury, beyond Jenkins mentioning that they had watched replays later and noticed Poole grabbed his knee. And it wasn’t just the coach making statements.

Shortly after he concluded his postgame news conference, Morant tweeted “broke the code” along with a short video of the play where he got hurt. The phrase is a reference to Warriors coach Steve Kerr saying Brooks “broke the code; that’s how I see it” with his flagrant-2 foul on Payton in Game 2. Morant deleted the tweet not long after hitting send. It had already surpassed 1,000 retweets by that point.

“You know the code,” Jackson said after Game 3. “We talk about the code all series at this point,” he continued.

It’s not going to stop, either.

There has been one ejection in each game of the series so far. In Game 1, it was Draymond Green who committed a flagrant-2 foul on Brandon Clarke, swiping Clarke’s face on a play at the basket, then grabbing his jersey on the way down. In Game 2, it was Brooks who committed the flagrant 2, which earned a player an automatic ejection, on Payton. Brooks smacked Payton in the back of the head on a fast break, knocking him down awkwardly and fracturing the Warriors guard’s left elbow. Brooks was suspended for Game 3 because of the play. On Saturday, Kyle Anderson got tossed for two technical fouls.

Poole, when presented with video of the play in question, said there was no malintent.

“It was a basketball game,” he said. “I hit the ball (the first swipe). I was going for the ball. …I’m not even that type of player.”

“That’s playoff talk,” Thompson said. “Me personally, I’ve been through a tough knee injury, and I don’t think there’s any malicious intent from Jordan. I don’t even think he’s strong enough to affect somebody’s knee, but we’re not out there trying to hurt people or trying to club people in the back of the head on a fast break. We play the game the right way, and I’m going to have his back.”

Green said he’s not going to “sit here and go tit-for-tat. We’ve got a basketball game to try to win Monday.”

Jenkins stopped short of outwardly calling Poole’s play intentional, but talked around the question when a reporter asked about the topic.

“No, I didn’t say it was on purpose,” he said. “I said there was a grab. I’m just curious what happened.”

The series has been physical all the way through. Now, it’s getting more combative. The bumping, however, did not help Memphis on Saturday.

The Grizzlies kept it close in the first half mostly because of takeaways. The Warriors committed 14 turnovers over the first two quarters, yet led, 64-57, at the midway point. Once they stopped giving it away in the third, they ran the Grizzlies out of the gym.

This is what happens when Golden State’s usually unaffected shooters start playing like themselves. The Grizzlies were disoriented on the perimeter. The Warriors found open guys. After a couple of games when Thompson didn’t drain jumpers and Stephen Curry didn’t look like a two-time MVP, they turned back to their usual selves. Thompson scored 21 points and nailed 4 of 6 3-pointers. Curry went for 30 and sliced ​​Memphis in the middle, scurrying to the rim and getting to the stripe endlessly. He made all 14 of his free throws.

The Warriors shot 71 percent on 2-pointers, 53 percent on 3s and 91 percent from the line.

“They’ve been scoring points in the paint, but we had better crowds there,” Jenkins said. “Our rotations weren’t great tonight. They had too many dots in the paint. Obviously, they shot it really well from the 3-point line. They just got loose everywhere, so they just broke us down too much.”

The Grizzlies won without Morant this season. They went 20-5 in his absence. But if they are going to come back, they’ll need Morant to do it. They fell, 117-116, in Game 1 when Green missed the entire second half because of the ejection. They won Game 2, 106-101, behind 18 fourth-quarter points from Morant, including 15 consecutive ones over the final 4:16 of game time.

They will get Brooks back for Game 4, which will help. The Grizzlies have gone smaller than usual in this series and those tiny lineups aren’t the same without their stoutest perimeter defender. It doesn’t help that Desmond Bane, who scored 16 points on 5-of-10 shooting, is still admittedly not 100 percent while playing through a lower-back injury.

But the Grizzlies don’t need their top player hurt, too. For now, they are staying optimistic.

“We’ve seen Ja heal like Wolverine out there,” Grizzlies guard De’Anthony Melton said. “So, he can be limping one day; the next day, be fine. He’s a warrior. He’s a competitor. He’s just a hooper, so who knows where his level of injury is at? He understands his body and he understands what the team needs, so we’ll make the best decision.”