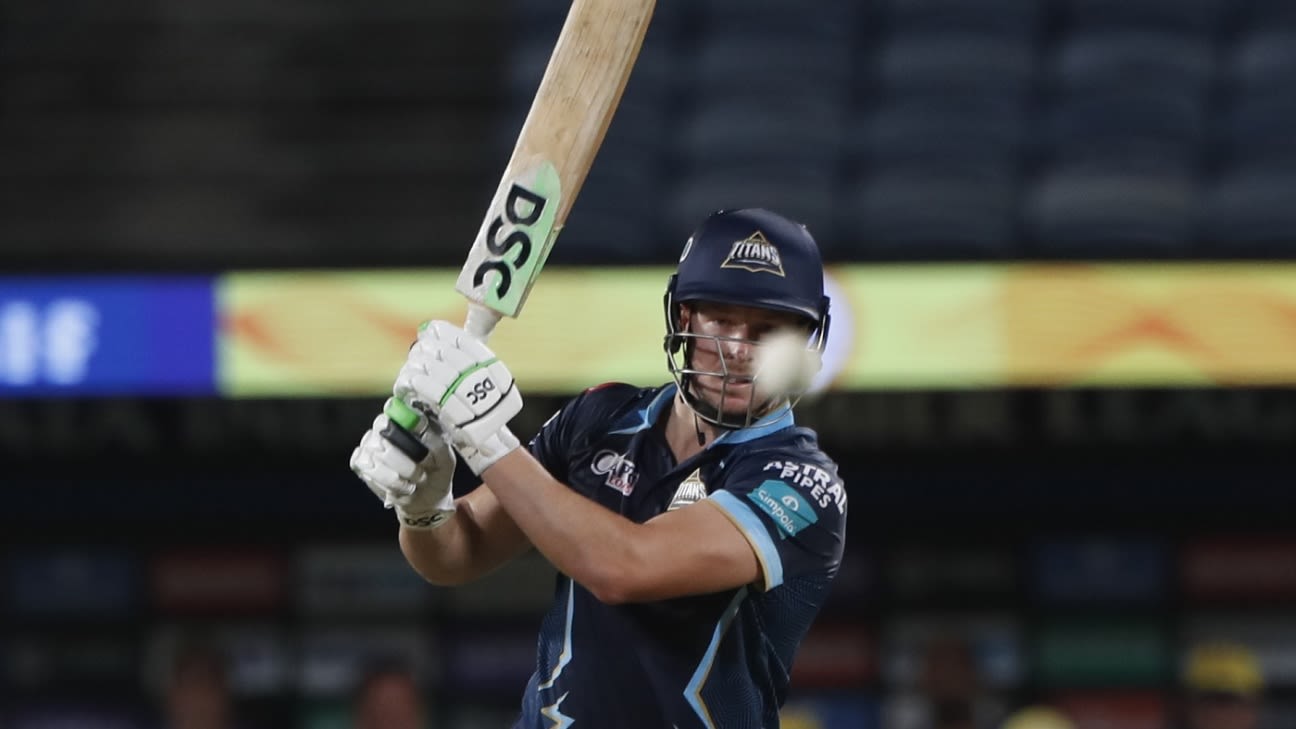 Across the previous six IPL seasons, 58 batters faced 500-plus balls. Among those, David Miller is in 57th position in terms of strike rate.

In 2020, when he was with Rajasthan Royals, the presence of Steven Smith, Ben Stokes, Jos Buttler and Jofra Archer meant he got just one game in the whole season. Next year he played nine matches but could score only 124 runs at a strike rate of 109.73.

None of that seemed to matter on Sunday as he struck an unbeaten 94 off 51 balls and steered Gujarat Titans to a miraculous, last-over win against Chennai Super Kings in Pune.
Titans were chasing 170 on a pitch where the ball was holding, gripping and turning. They were without their best batter, which further compromised their already-thin batting line-up. And when their second-best batter fell for a first-ball duck, things didn’t look pretty.

By the time Miller walked in, Titans were reeling at 16 for 3, the asking rate had climbed past 9.50, and Maheesh Theekshana was asking all sorts of questions with his mystery spin. Apart from Theekshana, Super Kings had two more world-class spinners in their side: Moeen Ali and captain Ravindra Jadeja himself.

It’s no secret that Miller prefers pace on the ball. He knew if he didn’t attack the spinners, they would end up bowling their full quotas, with seamers rotating around them. So he took them on purpose at the same time thing his areas and moments.

Given the slow nature of the pitch, he decided to target the straight boundaries. And whenever he attempted a big shot, he gave it his all; there were no half measures. For instance, when Theekshana tossed one up in the fifth over, Miller hit it so hard that even though it went just over the bowler’s head, he had no chance to even get a hand on it.

One advantage of having come in as early as the fourth over was he had the time to get his eye in against a relatively hard ball. By the tenth over, he was well set on 27 off 21 balls.

He launched Moeen over long-on for his first six before repeating the shot against Jadeja in the next over. Jadeja then bowled fuller on the pads, only to be slog-swept over deep square leg. When he went wider, Miller dispatched him to the cover boundary.

“I was trying to impose my presence and let them know that I was there to score,” Miller would say after the match.

That assault forced Super Kings to return to Chris Jordan, probably a little earlier than they wanted to. But Dwayne Bravo, using all his experience and variations, was making life difficult.

With 48 required from the last three overs, even Miller needed a helping hand. He found one in the form of Rashid Khan, who whipped Jordan for three sixes and a four in one over.

Still, Titans needed 13 from the final over. By now, Miller had Lockie Ferguson for company. In other words, he had to score all those runs on his own.

Jadeja backed Jordan to do the job for Super Kings. The first ball was a dot. On the second, Miller refused a single, which meant now 13 were required from four balls. But with Miller in beast mode, a Titans win looked almost inevitable.

He hit the next two legal deliveries for a six and a four, with a no-ball sandwiched between them. On the penultimate delivery, he picked up a couple to take Titans over the line.

When asked about his mindset this season, Miller said being part of the playing XI in every match has made a big difference.

“Unfortunately, in the last four to five years, I haven’t really played as much IPL cricket as I would have liked to,” he said. “The nature of the tournament is that there are only four overseas players [in an XI], and the other overseas players are always going to miss out. And I have sort of found myself in an in-between place where I have been sort of in and out, in and out of Kings XI [Punjab] and then Rajasthan [Royals]. I have played some decent games there but I felt I couldn’t really get going.

“It has been really, really encouraging to be part of the Gujarat Titans and just know that I am 100% backed. We have a nice environment, we enjoy each other’s success and I think that goes a long way to doing well. But more importantly, it has been really nice to play every game.”

Only the future will tell if Miller can carry this form deep into the tournament. For now, he has served a reminder that on his day, if it’s in the arc, it’s still out of the park.

Titans will hope those days are not so far apart as they have been.

Hemant Brar is a sub-editor at ESPNcricinfo