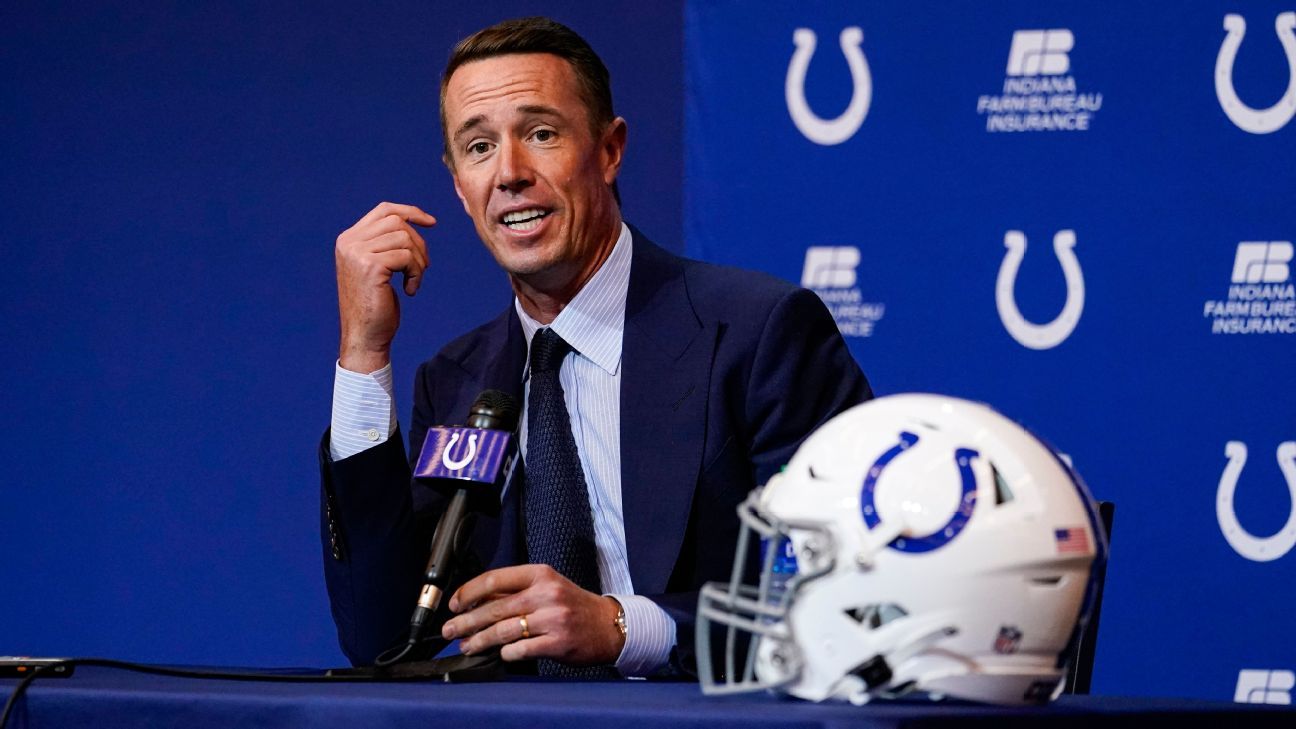 INDIANAPOLIS — Matt Ryan felt he would be a quarterback of one of only two teams next season: the Atlanta Falcons or Indianapolis Colts.

His desire to play for a different team for the first time in his 14-year NFL career came last weekend after a Zoom call with Colts general manager Chris Ballard, head coach Frank Reich, offensive coordinator Marcus Brady and assistant quarterbacks coach Parks Frazier. The Falcons traded the 36-year-old Ryan to the Colts on Monday for a third-round pick in this year’s draft.

“Their passion, their commitment, their professionalism, the accountability Chris has for himself and what he does, the empathy Frank has for my situation of understanding of being in a certain spot and done it for one way,” Ryan said Tuesday during his introductory news conference as the Colts new starting quarterback. “I just knew the roster they have and the belief in the way they do things, the time was right for me. I knew that it was time to go in a different direction.”

Ryan had no idea where he would be playing next season last week. That’s because the Falcons were one of the teams considering a trade for quarterback Deshaun Watson, which definitely would have ended Ryan’s time in Atlanta. Ryan and the Falcons pushed his $7.5 million bonus roster that was due to him to Monday while they waited for Watson to make a decision on his future. Watson finally waived his no-trade clause to go to the Cleveland Browns, which meant the Falcons had to decide what to do with Ryan.

“It’s definitely been a whirlwind of a week for sure on my end,” Ryan said. “This time last week we didn’t know how it was going to shake out. … I’ve been fortunate I’ve never been through a transaction or a roster move, which is commonplace and day to day for the majority of the locker room. … From the time it started last week until we sit here today, I thought everybody handled everything professionally. I didn’t like everything I heard, but you don’t always like what you hear sometimes.”

The Falcons and Colts started trade talks on Friday, according to a source, before Ryan met with members of the Colts coaching staff Saturday. The quarterback came out of the meeting feeling like it was time for a change. Ryan threw for 59,775 yards and 367 touchdowns during his career with the Falcons, which also included him being named NFL MVP in 2016.

“I’m also coming from a place that I was really, really fortunate to have been for 14 years and I want to start by thanking everyone in the Falcons organization, starting with [owner] Arthur Blank,” Ryan said. “It’s bittersweet for sure. I’m really appreciative of my time there. It’s sad to see it end, but I’m so excited to see what can happen here. What this team and organization is all about. It’s a real exciting day for me and my family.”

Ryan highlighted some of the top quarterbacks to play for the Colts, including Johnny Unitas, Andrew Luck, Peyton Manning and Philip Rivers. Ryan will be the Colts’ sixth different Week 1 starting quarterback in as many years next season.

The Colts hope Ryan is not only the next great quarterback to play for them, but also give them at least a couple of years in order to find his replacement at some point. The Colts restructured the final two years of Ryan’s deal, with the $53.9 million left on it being guaranteed in some form, a source told ESPN’s Jeremy Fowler.

“I’ve said from the start, I’d like to play as long as I can, I feel really good,” Ryan said. “My body feels really good. I still feel like I can play at as high of a level that I have ever have as long as that is; nobody has a crystal ball to know exactly how long it’s going to be.”

Ryan mentioned how Tom Brady and Matthew Stafford left the New England Patriots and Detroit Lions, respectively, and went on to win Super Bowls with their new teams (Tampa Bay Buccaneers and Los Angeles Rams) in their first seasons there. In order for the Colts to even start thinking about being a Super Bowl contender, they have to add more pieces on offense. Receiver, tight end and left tackle are high on the list of needs. The Colts have only been to the playoffs twice since 2014.

“I understand I’m one part of this wheel and I need to pull my weight and do my job really well,” Ryan said. “It’s a pretty strong wheel that has been built [in Indianapolis]. That’s why I have to be a great teammate, do the best I can, whatever I need to do to help the guys. … I’m so fired up to get to work and get on the field with these guys and try to do my part to help this team win as many games as we can.”