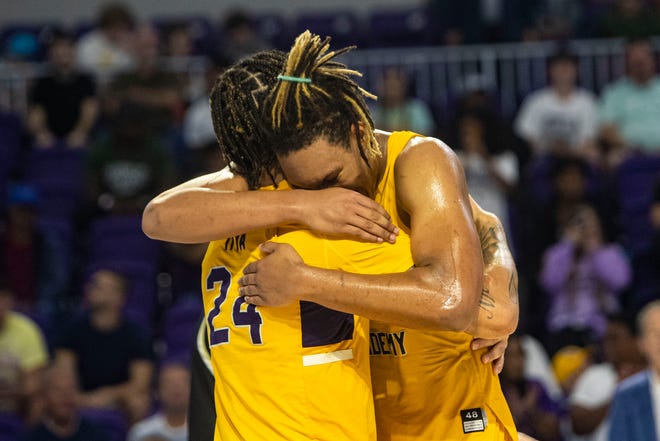 BLOOMINGTON – IU reached back into the considerable talent pool of one of the country’s most-prominent prep programs for a fourth commitment in the 2022 class Monday.

Malik Reneau, a top-30 power forward and Montverde Academy teammate of Indiana signed Jalen Hood-Schifino, announced his commitment to Indiana on via social media. He becomes the Hoosiers’ second highest-rated commitment in the incoming freshman class, behind his prep school teammate.

“After my visit, it was clear to me there was no point in visiting other schools,” Reneau told IndyStar on Monday. “Coach (Mike) Woodson and his staff, they just presented the game plan for me when I get there. It was just so clear to me. It was a no-brainer. It was easy to talk with the coaches and the players, it was easy to connect with them.”

Reneau fortifies an impressive class for Woodson, near the end of what is Woodson’s first full recruiting cycle as a college coach. A five-star prospect per the 247Sports Composite, Reneau strengthens a frontcourt already bolstered by Race Thompson’s decision to return for a sixth year at Indiana, but one also steeling itself for the possibility of losing Trayce Jackson-Davis in the NBA draft.

A four positionally, Reneau is listed at 6-8. The Composite rates him No. 28 overall in his class, just behind Hood-Schifino at No. 21, and that same ranking slots Reneau in as the No. 4 power forward in the country in 2022.

Hood-Schifino came with Reneau to Bloomington last weekend, after both players competed in the Jordan Brand Classic in Chicago on Friday. He’s been a lead recruiter for the Hoosiers since Reneau re-opened his recruitment following Mike White’s departure from Florida last month. Reneau had previously signed with the Gators.

“It doesn’t stop with ‘Fino,” Reneau said. “Fino’s great. We’ve had this relationship for a long time. We’ve been talking about it and stuff like that. It was really the coaching staff. Fino does a great job, but he was on the visit eating all day. But yeah, he made all his points.

His commitments vaults the Hoosiers past Illinois, Michigan and Ohio State to No. 1 in the Big Ten in the 247Sports Composite 2022 class rankings, and lands the Hoosiers in the top five nationally as well.

Reneau becomes the third player ranked No. 30 or better by the Composite to commit to Indiana since Woodson’s arrival, following Hood-Schifino in 2022, and Tamar Bates in 2021. He adds frontcourt depth to an incoming freshman class that already deepens IU at point guard (Hood-Schifino), two guard (Lawrence North standout CJ Gunn) and on the wing, where hybrid forward Kaleb Banks could develop into a game-changing player in college.

Reneau’s commitment does create a potential scholarship logjam, though one that probably falls in the category of good problems for Woodson to have.

With Jackson-Davis currently testing the NBA draft waters while retaining his eligibility, and Thompson back for a sixth season, Reneau nominally fills the space Jackson-Davis would leave should he remain in the draft. If Jackson-Davis elects to return to Indiana, the Hoosiers will be at the scholarship limit for 2022-23.

But they will also boast not just enviable depth in the frontcourt, but also versatility, with as many as five players — Jackson-Davis, Thompson, Reneau, Banks and Jordan Geronimo — able to play either of Woodson’s forward positions.

Offseason checklist:5 keys for UI to build on for Year 2 under Mike Woodson