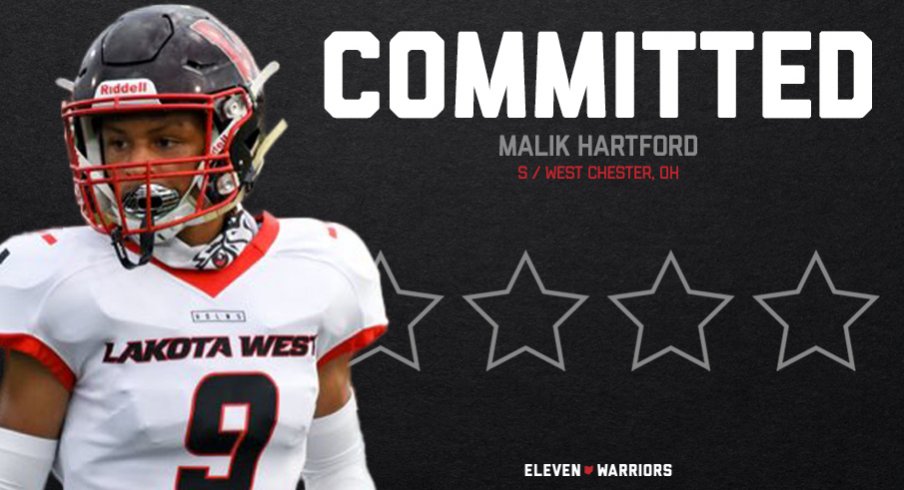 Ohio State has added a big piece to its future secondary.

Four-star in-state safety Malik Hartford became the sixth member of Ohio State’s 2023 recruiting class Wednesday when he announced his commitment to the Buckeyes.

Hartford’s Ohio State recruitment progressed quickly, as he received his offer from the Buckeyes during an unofficial visit on Jan. 22. The Buckeyes were able to land Hartford’s commitment so quickly largely because of his existing relationship with OSU safeties coach Perry Eliano, who was previously Hartford’s lead recruiter at Cincinnati.

“I’m just more comfortable around them and I’m learning their scheme,” Hartford told Eleven Warriors about Ohio State at the Under Armor Next camp on March 20. “Coach Eliano is a great coach and the overall program (is great). It’s a top three program in the country. They’re always good.”

“He’s a good coach,” Hartford said. “He knows his scheme and he knows football.”

After making another visit to Columbus on March 10, Hartford was ready to lock in his commitment to the Buckeyes.

“The visits have been good, I’m learning and growing on each and every one that I take,” Hartford said.

Listed at 6-foot-3 and 175 pounds, Hartford is ranked as the 146th-best prospect, the 11th-best safety and the fourth-best recruit from Ohio in the 2023 class, according to 247Sports’ composite rankings.

Hartford’s addition to the current class gives Ohio State a very Ohio-heavy start to its 2023 cycle, as four of its six commitments are from the Buckeye State. Hartford joins offensive linemen Luke Montgomery and Joshua Padilla and defensive tackle Will Smith Jr. as in-state prospects who have committed to the Buckeyes in the 2023 class.

With the addition of Hartford, OSU currently boasts the sixth-rated recruiting class nationally.