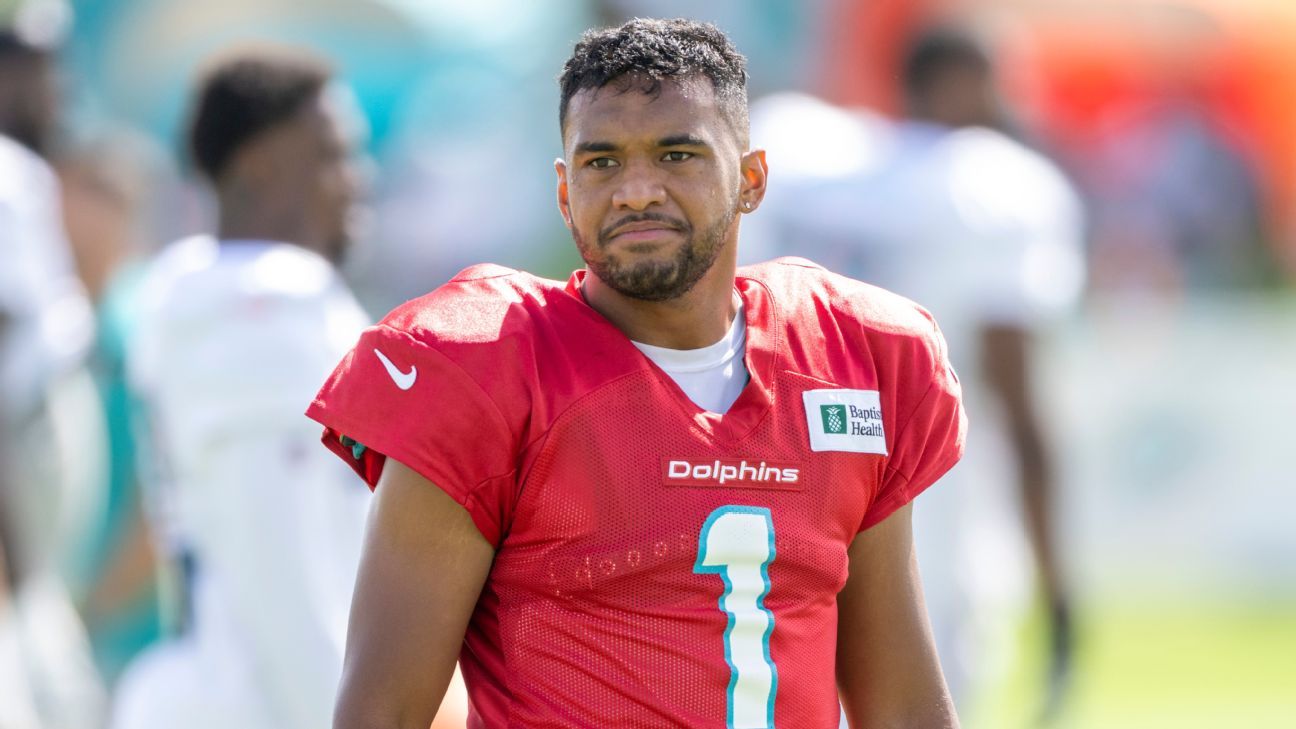 TAMPA, Fla. — Miami Dolphins quarterback Tua Tagovailoa told reporters last week that he believes the team is “all in” on him despite his prior interest in Tampa Bay Buccaneers quarterback Tom Brady.

His answer was even more succinct Wednesday when asked again about his reaction to that interest.

Tagovailoa and the Dolphins practiced with Brady’s Buccaneers on Wednesday, the first of two joint practices before the teams’ preseason opener Saturday at Raymond James Stadium. The timing of their joint practice coincidentally comes one week after the NFL disciplined Miami for impermissible contact with Brady in 2019 and 2021 — failed efforts to persuade him to join the Dolphins as a limited partner, football executive and possibly as a player.

The league fined Dolphins owner Stephen Ross and limited partner and vice chairman Bruce Beal combined $2 million and stripped the Dolphins of their 2023 first-round draft pick and 2024 third-round pick in response to their contact with Brady and impermissible contact with then- New Orleans Saints head coach Sean Payton before his retirement in January.

Tagovailoa had an extended exchange with the reporter who asked him about his reaction to the league’s investigation, during which he insisted that Miami’s interest in Brady was in the past.

Speaking to local media last week, Tagovailoa said he generally keeps a tight circle around him and doesn’t pay attention to any narrative surrounding him until he’s asked.

“I would say the only thing that gets frustrating is if you hear it every day or if you see it every day,” he said. “For me, I eliminate all of that. Don’t hear it. Don’t see it. I go home, go to my family, study, wake up the next day, come back and enjoy football. I hear everything obviously from the media and then when [the communications staff] preps me for whatever you guys are going to say, then I’m like, ‘Ah, I’ve got to answer this. All right, let me figure out something politically correct to say.'”

Brady was not made available to the media Wednesday and has not issued a public comment about the tampering incidents. Tagovailoa said he spoke with Brady at the Bucs’ facility Wednesday — mainly about the offseason and golf, although Tagovailoa said he asked the seven-time Super Bowl champion for some football insight, but didn’t specify any further details.

Dolphins head coach Mike McDaniel downplayed the impact of practicing with Brady and the effect last week’s news has on his team.

“For me, nothing happened. Everyone else is the one making it awkward,” McDaniel said. “It doesn’t occupy a single iota of space with anybody. It’s hard enough to be good in this league. As the Miami Dolphins, all of our energy is very coordinated and only has to do with us getting better and everything else would be an opportunity cost that we’re not willing to expend.”