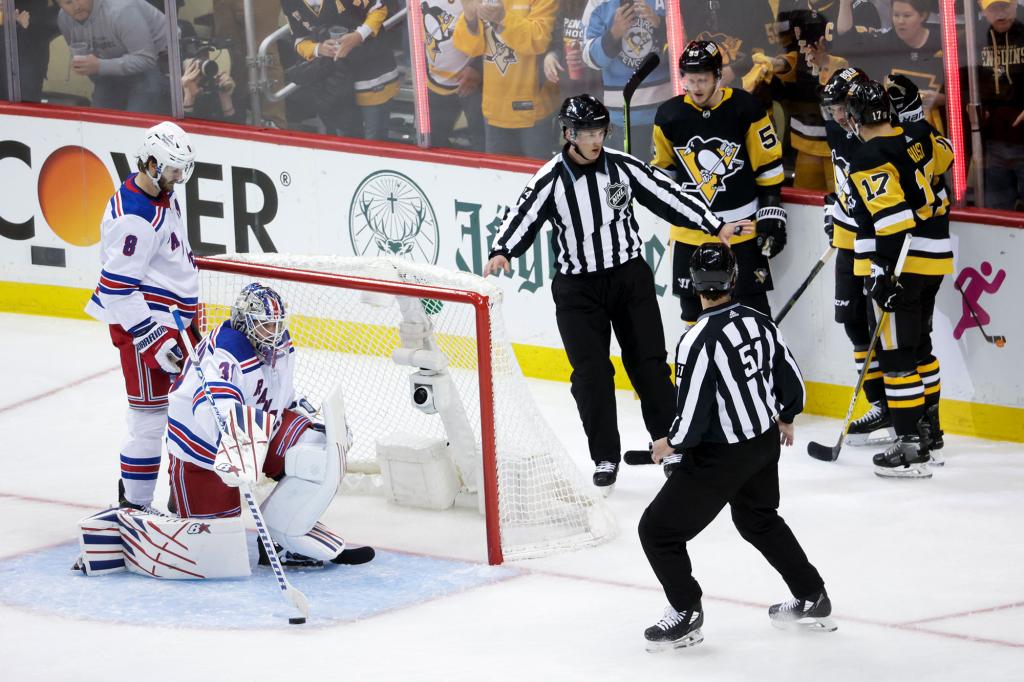 The team in front of him had just proven what so many had said about their unprecedented success throughout the regular season: The Rangers are not the club they’ve appeared to be without Shesterkin.

It was ugly. It was humiliating. It was an egregious 7-2 loss to Sidney Crosby and the Penguins that sent the Rangers back to New York licking their wounds and facing elimination in Game 5 on Wednesday. The Blueshirts are now charged with the almost impossible task of winning three straight to have any chance of advancing from Round 1 of the Stanley Cup playoffs.

Shesterkin was pulled for a second straight game after Pittsburgh exploded for five goals in the middle frame. The defensive breakdowns were plentiful. The Rangers were chasing everything. There was no structure, no control or anything they could do to limit Crosby, who continued to hammer the Rangers with a three-point performance in the form of a goal and two assists.

Throughout the regular season, the Vezina Trophy favorite had been stellar in his outings following losses, going 10-1-1 with a .931 save percentage, a 2.08 goals-against average and two shutouts. Shesterkin was notable to tap into that in Pittsburgh, where Penguins fans made it their life’s mission to haunt the Rangers’ star goalie.

Read the expert take on the Blueshirts

Sign up for Larry Brooks’ Inside the Rangers, a weekly Sports+ exclusive.

The Rangers were supposed to have a significant edge in goal over the Penguins, whose starter Tristan Jarry went down toward the end of the regular season with a fractured foot and hasn’t been able to play in this series. And when their backup Casey DeSmith exited in the second overtime of Game 1 and ultimately underwent core muscle surgery, the advantage should’ve grown more apparent.

Instead, the Rangers have allowed Pittsburgh’s third-string netminder Louis Domingue to get the better of them. Domingue has combined for 54 saves against the Rangers over the last two contests.

Pittsburgh received goals from seven different players, which had the PPG Paints Arena crowd celebrating with the wave by the third period.

The Rangers were decent enough in the first period to emerge with the game tied 1-1. Alexis Lafreniere opened the scoring just over two minutes in, when he snapped the puck past Domingue after rookie defenseman Braden Schneider kept it in the offensive zone and connected with the 20-year-old winger.

The Penguins’ first-period game-tying goal came on another — you guessed it — controversial call that had to go under review. With defenseman Patrik Nemeth in the box for his team-leading fourth penalty of the series, Crosby jammed the puck in on the Penguins power play, but it was difficult to see where the puck was.

Officials deemed the puck crossed the line and the goal was upheld for the 1-1 score at 11:17 of the first period. Crosby’s goal tied the star center with long-time Penguin Kevin Stevens for third place on the franchise’s all-time playoff power-play goals list with 20.