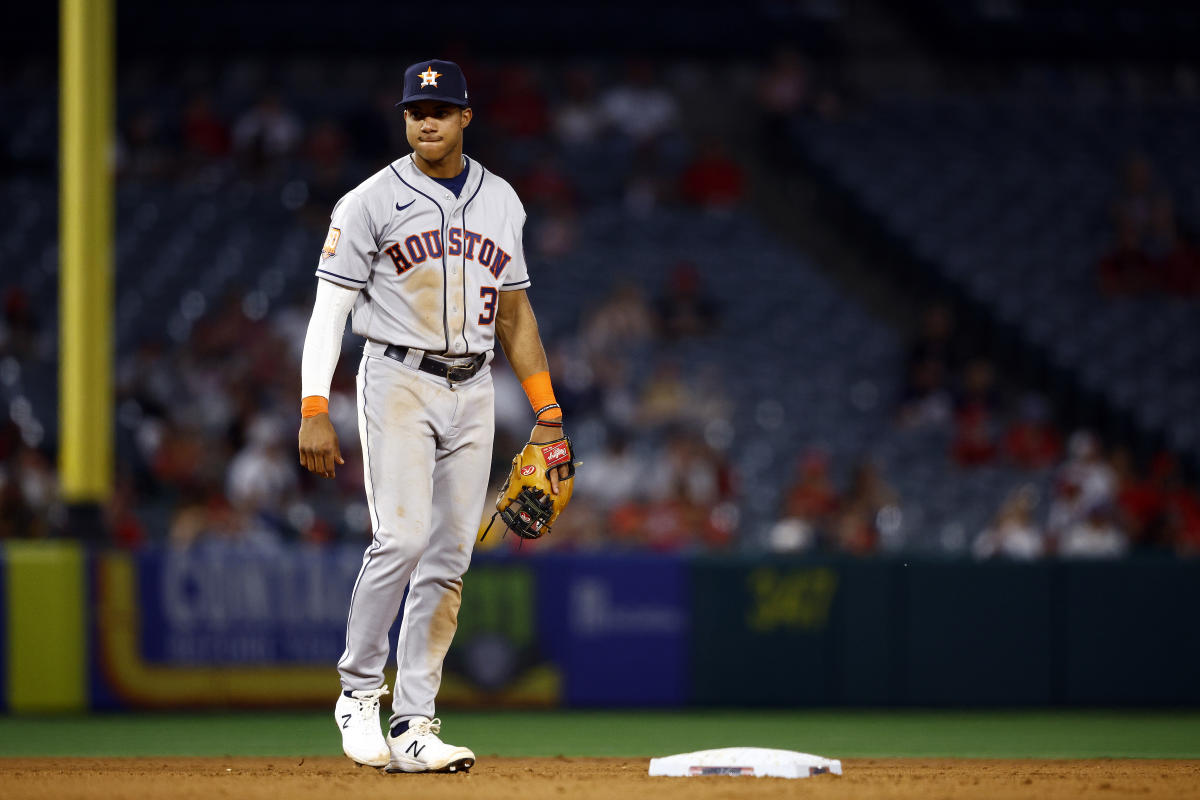 There are a lot of forces that lead to pressure building up around rookies. Some of them emanate from the player himself — whether they possess the obvious physical tools for stardom, or minor-league domination or a novel profile everyone wants to succeed.

Others are decidedly external. Prospect lists, comparisons to stars of yore, a famous father, etc. And sometimes, a rookie doesn’t even get to define himself as A Guy before he’s tapped to replace The Guy.

It’s perhaps the toughest ask of a young player. You don’t just have to adjust to the majors and find your way, you have to do it while everyone compares you to the franchise player who just left. Also, a perennial contender’s division dominance might ride on it.

Such was the scenario for Jeremy Peña, the 24-year-old shortstop tasked with stepping into the shoes of Carlos Correa — the catalyst and vocal leader of the recent vintage Houston Astros. When Correa decamped for Minnesota after the lockout, the pressure really kicked up.

So far, it looks like it created a gem. Peña hasn’t just been the best rookie, he’s been one of the best players in baseball.

What’s not a surprise: Peña is a seriously good shortstop. His defensive prowess was well-known, it was the carrying tool that got him on the radar to begin with. But a combination of injuries and the pandemic kept his offensive evolution largely hidden from the public. When he slugged .440 across two levels of A ball in 2019, at age 21, it was fine but not sounding alarms. When he bashed 10 homers and slugged .598 in a 30-game sprint at Triple-A last year, more eyebrows were raised.

Well, Peña has now played 32 games in the majors and the Triple-A flashes look real. He has already hit seven homers, and is batting .274/.333/.522 — 52% better than the average hitter, by wRC+ — to go along with the elite shortstop defense.

Whichever WAR metric you ask, Peña has been a top-10 position player. He has a lot of tests to pass before we can say he’s as good as (or, gulp, better than) Correa, but that crazy-to-suggest outcome is still on the table.

Ryan might be the rookie who has shifted his team’s fortunes the most for 2022. The deceptive 25-year-old has delivered an ace-like start for a Twins team that appeared to lack sure things in the rotation. Start after start, he’s chipping away at skepticism that his low-90s fastball will keep dominating in the majors.

Of all the things Rodriguez was supposed to be, fast wasn’t one of them. But as Hannah Keyser detailed for Yahoo Sports this week, the Mariners uber-propsect worked to turn a relative weakness into a serious strength. It has helped him take over in center field and steal an MLB-leading 11 bases as he finds his way at the plate.

The early-season darlings are now taking some lumps.

Pitchers adjusted to Suzuki’s opening blitz by cutting a lot of fastballs out of his diet. That appeared to mess with his strong plate discipline for a while, though he has shown signs of adjusting back. He has hits in six straight games.

Kwan, meanwhile, is batting .192 in May, still making a lot of contact but watching most of it land in gloves. The problem he will have to solve is how to muster some extra-base pop. He’s managed only two knocks for extra bags since April 22.

Seattle’s latest prospect jewel to reach the majors is the 6-foot-4 righty renowned for his control. Pounding the zone with 96 mph heat, Kirby’s minor-league numbers are borderline comical. Two starts in, the pattern is holding in the big leagues. He has eight punchouts to only one walk through 10 innings, though his second outing was a bumpier one.

His next turn comes up Thursday against the Red Sox.

It was an ominous sign when the pitching-depleted 2020 Padres declined to summon Gore. Whispers built into a full panic that the development of the lanky lefty, once heralded as the best pitching prospect in the world, had gone sideways. The 2021 season confirmed those fears. A disastrous, walk-laden stint at Triple-A sent him all the way down to the complex league.

When he arrived at spring training this season, he wasn’t back to the form that made scouts salivate, but he had gained enough control over his mechanics (and the strike zone) to be effective. Now, he has reached the majors and made five solid starts for the Padres. This week, he ended up getting “demoted” again, but it was simply a move to the bullpen with Mike Clevinger and Blake Snell returning. San Diego used him as a piggyback reliever with Clevinger and he fired three shutout frames against the Phillies. Scouts won’t be the only ones watching his progress now.

Greene threw 7 1/3 innings of no-hit ball with nine strikeouts that the desolate roster around him still managed to turn into a loss. Detmers finished off an actual no-hitter that involved only two strikeouts.

On the mound, these two could not be a whole lot more different if the world depended on it. A righty, Greene throws 100 mph regularly, but regularly runs into problems with homers (because that fastball is straight as an arrow) and walks (because it doesn’t always go where he expects). Detmers flings bendy offspeed stuff from the left side and relies on the flighty formula of weak contact and walk avoidance to get by.

What do they have in common? Extreme youth. They are the only pitchers under the age of 23 who have made even two starts in the majors this year. At the moment, neither has a stat line that would inspire much confidence for the rest of the season. But they have plenty of time to figure it out, and each has provided some proof of concept of what they could do in the years to come.

We opened with one rookie replacing a legend, and we’ll end with another. Bart isn’t making the same sort of splash in stepping in for Buster Posey, but he’s making it work.

It is a laughably extreme profile. He walks, he homers and, more than anything else, he strikes out. He has 12 walks and 12 hits, four of which have left the yard, to go with an eye-watering 37 strikeouts in 84 plate appearances. It isn’t what you would design for any hitter, but in this particular offense-suppressed year, it’s enough to make him an above-average hitter. And that’s rare for a guy who can play catcher. Just ask all the teams who haven’t had Posey for the past decade.