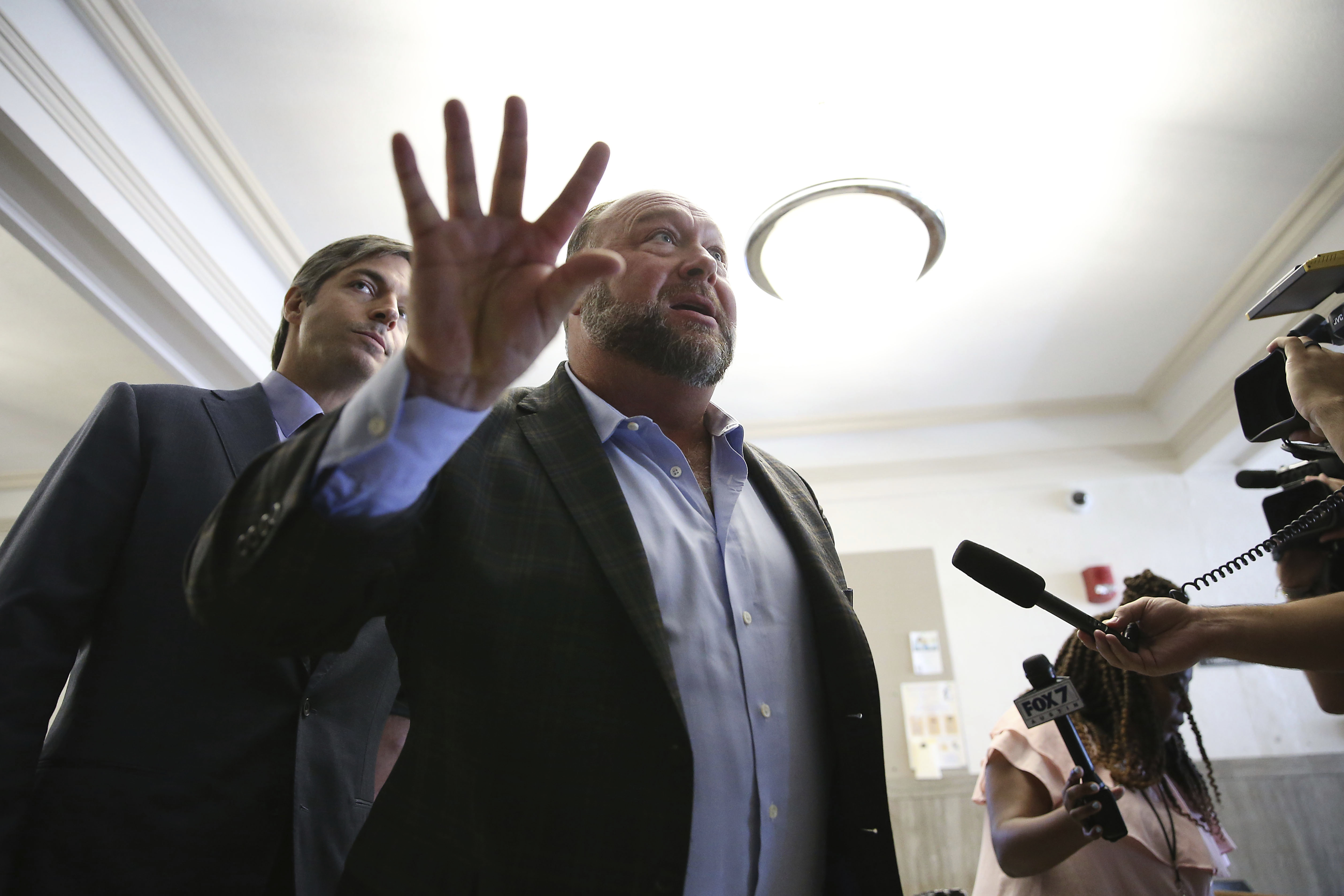 The total damages of nearly $50 million was significantly less than the $150 million in damages Neil Heslin and Scarlett Lewis were seeking.

Jones faces two more Sandy Hook trials to determine damages later this year: One for parents of a 6-year-old boy in an Austin court, and another for eight families in Connecticut.

Heslin and Lewis have tested that Jones’ constant push of false claims that the shooting was a hoax or staged made the last decade a “living hell” of death threats, online abuse and unrelenting trauma inflicted by Jones and his followers.

After years of false hoax claims, Jones admitted under oath that the shooting was “100% real” and even shook hands with the parents.

But the bombastic version of Jones was always lurking under the surface—or even on full display away from the courthouse.

During a break on the first day, he held an impromptu news conference just a few feet from the courtroom doors, declaring the proceedings a “kangaroo court” and “show trial” railroading his fight for free speech under the First Amendment. On the first day, he arrived at the courthouse with “Save the 1st” written on silver tape over his mouth.

When he came to the courthouse, he was always with a security detail of three or four guards. Jones, who wasn’t in court for the verdict, often skipped testimony to appear on his daily Infowars program, where the attacks on the judge and jury continued. During one show, Jones said the jury was pulled from a group of people who “don’t know what planet they live on.”

That clip was shown to the jury. So was a snapshot from his Infowars website showing Judge Maya Guerra Gamble engulfed in flames. She laughed at that.

Jones was only slightly less combative in court. He was the only witness to testify in his defense. Gamble warned Jones’ lawyers before it even started that if he tried to turn it into a performance, she would clear the courtroom and shut down the livestream broadcasting the trial to the world.

When Jones arrived for Lewis’ testimony, Gamble asked if he was chewing gum, a violation of a strict rule in his courtroom. She’d scolded his attorney Andino Reynal several times already.

That led to a testy exchange. Jones said he wasn’t chewing gum. Gamble said she could see his mouth moving. Jones opened wide and leaned over the defense table to show her a gap in his mouth where he’d had a tooth extracted. Jones insisted he was only massaging the hole with his tongue.

Some legal experts said they were surprised by Jones’ behavior and questioned whether it was a calculated risk to boost his appeal to fans.

“It’s the most bizarre behavior I have ever seen at a trial,” said Barry Covert, a Buffalo, New York, First Amendment lawyer. “In my opinion, Jones is a money-making juggernaut — crazy like a fox,” Covert said. “The bigger the show, the better.”

Kevin Goldberg, a First Amendment specialist at the Maryland-based Freedom Forum, said he found it hard to imagine what Jones might be thinking and what benefit he could derive from his behavior.

“I don’t know what it is designed to accomplish other than being on brand for Alex Jones,” said Goldberg. “This seem to be a man who has built his brand … on disrespecting the institutions of government … and this court.”

Defendants at trial are often given some leeway because they have so much at stake — prison in criminal cases and, in Jones’ civil trial, potential financial ruin. Monetary sanctions or even post-trial contempt charges are also a possibility.

Gamble had to be careful how she handled it all, Covert said.

“Jones’ bizarre behavior is putting the judge in a very difficult box,” said Covert. “She doesn’t want to appear to put her finger on the scales of justice.”

Jones skipped Heslin’s testimony when he described for the jury holding his dead son in his arms with a “bullet hole through his head.”

Heslin said he wanted to confront Jones face-to-face and called his absence that day “cowardly.” Jones was instead appearing on his daily broadcast.

Jones was in the room when Lewis took the stand, sitting barely 10 feet (3 meters) away as she looked directly at him.

“My son existed. I am not ‘deep state,’ she said of the conspiracy theory of a shadowy network of federal workers running the government.

“I know you know that,” Lewis said.

When Lewis asked Jones if he thought she was an actor, Jones answered, “No,” but was cut off by Gamble, who scolded him for speaking out of turn.

At the end of that day, Jones and the parents shook hands. Lewis even handed Jones a sip of water to help calm a persistent cough Jones said was caused by a torn larynx. Her attorney Wesley Ball quickly stepped in to break it up.

“No,” Ball snapped at Jones, “You are NOT doing this.”

Jones was the only witness in his defense. His testimony pushed the rules of the court so often that the plaintiffs openly questioned whether Jones and his attorneys were trying to sabotage the proceedings and force a mistrial. They filed a motion for sanctions against them after Jones claimed he was bankrupt, which attorneys dispute and was off limits in testimony.

At one point, Jones appeared flabbergasted when the family’s attorneys announced that Jones’ legal team had mistakenly sent them two years’ worth of data from his cellphone — a massive data dump they said should have been produced in discovery but wasn’t. They said it proved he’d been receiving texts and emails about Sandy Hook and his media company’s finances that he hadn’t turned over under court orders.

“This is your Perry Mason moment,” Jones snapped.

Plaintiff’s attorney Mark Bankston said Thursday that the House committee investigating the Jan. 6, 2021, insurrection at the US Capitol had requested those materials and that he intended to give it to them.

TheJan. 6 committee first subpoenaed Jones in November, demanding a deposition and documents related to his efforts to spread misinformation about the 2020 election and a rally on the day of the attack.

During the trial, Jones often spoke out of turn, and was cut off when he veered into conspiracies, ranging from the Sept. 11 terror attacks being staged to a fake effort of the United Nations on world depopulation. He continued to call into question some of the biggest events and significant government institutions in American life.