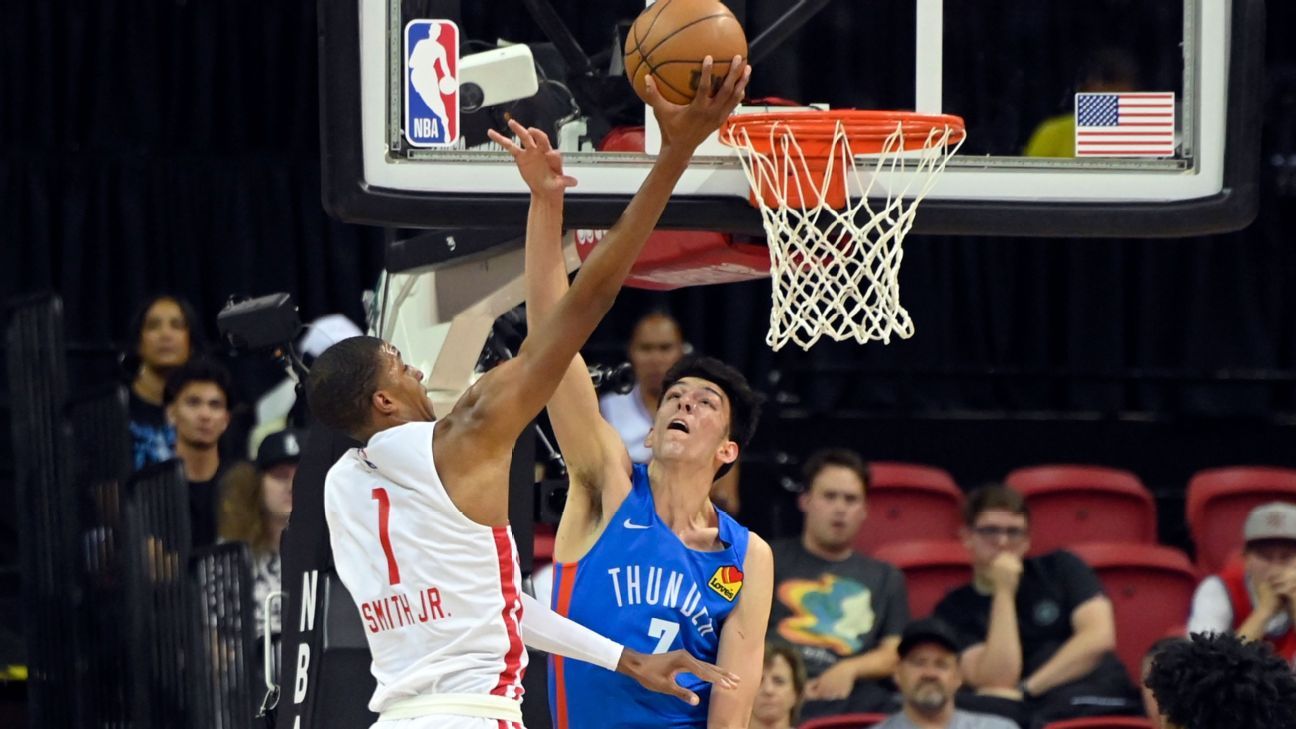 LAS VEGAS — Oklahoma City Thunder forward-center Chet Holmgren and Houston Rockets forward Jabari Smith Jr. didn’t put on much of an offensive display Saturday night, but both showed the all-around games that made them such attractive choices at the top of last month’s NBA draft.

In one of the most anticipated games of this year’s schedule here at the NBA’s annual summer league, Smith finished with 12 points on just 5-for-19 shooting from the field while Holmgren had 12 points on 3-for-10 shooting in Houston’s 90 -88 win.

But Smith also had nine rebounds, four steals and three blocks in 30 minutes. And he forced a missed layup by Thunder guard Josh Giddey that would have tied the score at the buzzer.

“I feel like that’s my greatest attribute, is defense,” Smith said. “Being able to guard multiple positions, being able to defend the rim and just being able to make things hard for players that play like me.

“I feel like I’m the best matchup for somebody who can shoot, who can get to different spots and just — I feel like I’m just a matchup nightmare for anybody of that caliber.”

Smith’s appeal coming into the draft was his ability to impact the game at both ends. At 6-foot-10, he has a quick, high release on his jumper and long arms and quick feet to wreak havoc defensively.

He showed both facets of his game in one sequence in the second quarter, when he blocked Holmgren’s shot inside then buried a 3-pointer at the other end on Houston’s next possession.

And while Smith struggled with his shot, he was more aggressive in taking 19 attempts, a significant difference from his first game against the Orlando Magic here Thursday night. He was 4-of-10 shooting against the Magic.

“My shot wasn’t falling, but I felt like I could impact the game in different ways, like just trying to play defense as hard as I can, trying to get every rebound, trying to block shots,” Smith said.

Holmgren, meanwhile, was competing in his first game in Las Vegas, after playing twice earlier this week in Salt Lake City.

Like Smith, he couldn’t get anything going offensively on Saturday. But also like Smith, Holmgren filled up the stat sheet, compiling eight rebounds, two assists, two steals and four blocks. It was an indication of the many ways the 7-foot-1 Holmgren can make an imprint on the game.

Listed at just 195 pounds, Holmgren’s weight garners plenty of attention. But his length, timing and quickness give him the potential to be a force as a weakside help defender.

On multiple occasions, Holmgren came flying across the lane to blow up plays or swat shots away, and he said he is always looking for ways to impact the game.

“Just trying to try to cover up gaps, holes [in the defense],” he said. “Wherever it’s gonna be, no matter how good your defense is, no matter how good defenders you have, disadvantages are gonna happen in a game, whether it’s in transition or in the half court. You never know which way the ball is gonna bounce off the rim. So just having length and being able to cover space and cover up gaps, protect the rim, get deflections, whatever it might be.”