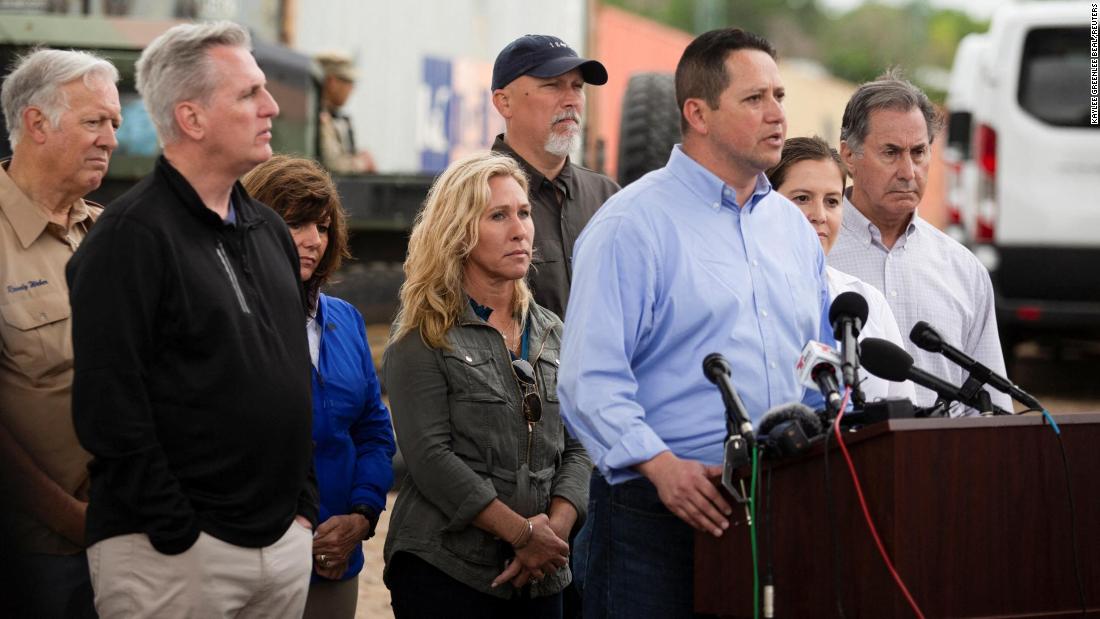 Most members of the party’s MAGA faction see little political upside to picking a distracting fight with McCarthy as Republicans remain favored to win the House in the fall, according to GOP sources familiar with their thinking, and would rather hold on to their potential leverage for an anticipated speaker’s race later this year, when they’re hoping to extract key concessions from McCarthy. Said one Republican source: “Of course” that’s what they’re planning to do.

And in a sign of just how essential their support may be down the road, Republican leaders have worked hard to court members of their right flank — including some of the very same fringe members whom they once feared posed a danger to their colleagues after January 6, 2021.

The potential concessions they may demand from leadership: plum committee assignments, promises to advance their legislative priorities and a push to prioritize their demands for investigations into the White House. And if Republicans win power but have only a narrow majority, McCarthy, the clear front-runner in the race, will have little room for error in a speaker’s vote and would almost certainly be forced to wheel and deal to lock down 218 votes to become the most powerful person in the House, giving rank-and-file Republicans tremendous leverage over their leader.

“There’s going to be a lot of turns between now and then. … It’s not even May,” said freshman Rep. Peter Meijer of Michigan, one of the 10 House Republicans who voted to impeach Trump for inciting the insurrection.

But at least Wednesday morning, there was minimal drama during a closed-door meeting — the first time the House GOP conference had gathered since the controversy surrounding McCarthy broke last week. Even some of the Republican lawmakers whom McCarthy was caught on tape criticizing stood up to defend him, according to sources in the room. In fact, the sharpest arrows during the meeting were aimed at House Minority Whip Steve Scalise of Louisiana, who had been recorded saying that Rep. Matt Gaetz’s incendiary rhetoric after January 6 was “potentially illegal.” And Scalise sought to smooth things over with the Florida Republican later in the day.

Republicans of all stripes emerged from the conference meeting trying to put on a united front and rallying around McCarthy, all of them eager to move past January 6.

“I am more concerned not about the past, but about the future,” said freshman Rep. Maria Elvira Salazar, a Florida Republican who flipped a Democratic seat.

“There’s no problem. (McCarthy’s) going to be the next speaker,” added Rep. Roger Williams, a Texas Republican who came to Congress in 2013.

And Rep. Scott Perry of Pennsylvania, who chairs the ultraconservative Freedom Caucus and was involved deeply in efforts to overturn the 2020 election, said that Democrats “don’t have anything. So they’re going to talk about January 6.”

For the once-powerful Freedom Caucus, its muted criticism of McCarthy reflects a desire to play the long game, should the party recapture the House this fall. Not to mention, Trump — whom they still view as their north star — publicly indicated he was unbothered by the leaked audiotapes, which included the GOP leader telling other House Republicans he planned to advise Trump to resign in the immediate wake of the insurrection .

But the Freedom Caucus’ ability to exert control in the speaker’s race depends on the GOP’s margins. If Republicans win back the House with a large majority, potentially 20 or more seats, McCarthy will have more of a cushion to lose some votes from the right. But if Republicans win with just a slim majority, he may be forced to cut a deal with those members — one of the reasons why his allies are preparing to spend record sums to build a so-called “governing majority.”

‘An even stronger hold on McCarthy now’

Trump told the Wall Street Journal hours after the audio of McCarthy had leaked that he and the House minority leader maintain a “very good relationship” and that he viewed the California Republican’s pilgrimage to Mar-a-Lago and efforts to ingratiate himself with Trump as “a big compliment, frankly.”

Three people close to Trump said his comments to the Journal aligned with what he has said privately about McCarthy, though they added that the episode has left the former President feeling as though he has more power over the top House Republican than ever before — and they expect him to cash in with several demands if the GOP retakes the House this November and McCarthy wants Trump’s support in a bid for Speaker.

“He has Trump’s loyalty, and Trump believes that he has an even stronger hold on McCarthy now,” said one of the people close to Trump.

One Trump adviser said the former President wasn’t the least bit surprised by McCarthy’s tapped comments to his House colleagues because he understands they differ politically and pragmatically.

“They just get on really well because Trump knows that Kevin is a little bit more establishment than him and McCarthy knows that Trump has a base he wants to keep in his back pocket,” said the Trump adviser.

The former President “has had a million opportunities to throw Kevin under the bus in the last year and he hasn’t. He’s been baited and baited and hasn’t taken it. I think that speaks to the goodwill McCarthy has really focused on building since the six-week period around January 6,” the adviser added.

If Trump and his allies do end up having influence in the speaker’s race, the items on their wish list include better representation on key committees, such as the House Intelligence Committee, as well as in leadership. They are also planning to push for a rules package that guarantees a more open and transparent process for bringing bills to the floor and voting on amendments.

And some members of the Freedom Caucus have been agitating to investigate Trump’s baseless claims of vote fraud and to launch impeachment proceedings into President Joe Biden and his Cabinet officials, including Homeland Security Secretary Alejandro Mayorkas. Gaetz and Rep. Marjorie Taylor Greene of Georgia have also pushed for their own select committee to investigate baseless conspiracy theories about January 6. They could seek a commitment from McCarthy to pursue some of those efforts in exchange for their speaker’s vote.

Behind closed doors on Wednesday, McCarthy gave a full-throated defense of his taped comments and said that the effort was part of a distracting attempt to divide them ahead of the midterms, according to several sources at the meeting. McCarthy got a standing ovation, the sources said.

While the broad consensus inside the House GOP is that McCarthy has largely emerged unscathed from the latest controversy, not everyone in the House GOP was willing to brush aside the damning tapes.

Gaetz, a frequent critic of leadership, called McCarthy and Scalise “weak men” in a statement on Tuesday evening after The New York Times reported they had privately worried that some fringe members, including Gaetz, could incite more violence after January 6. And during a testy exchange at Wednesday’s conference meeting, Gaetz pressed Scalise to explain his recorded comments suggesting that Gaetz was engaging in potential illegal activity by publicly attacking Rep. Liz Cheney of Wyoming, according to sources in the room.
Scalise responded that there had been a lot of information flying around after January 6 and he had just been speculating based on what law enforcement was saying at the time, adding that he takes potential threats seriously given his own experience of being shot on a baseball field during a 2017 GOP practice for an annual charity game. Scalise later asked Gaetz for a one-on-one meeting, where he attempted to hash things out and told Gaetz he was sorry if the remarks caused him any issues. The pair’s sit-down was first reported by Politico.

Another member who was mentioned on one of the tapes, Greene, also spoke up during the conference-wide meeting, sources said. She called for GOP leaders to apologize and said it broke her heart to hear what they said on tape. But Greene, a freshman member who has stirred up his own share of controversies, blamed the media for twisting people’s words.

And Greene, who had accompanied McCarthy on a recent border trip, went on to thank him and his lawyer for trying to get his personal Twitter account reinstated after it was permanently suspended — a remarkable turn of events, given that McCarthy reportedly asked after January 6 if the Twitter accounts of some controversial Republicans could be taken away.

When pressed on whether he had concerns about those comments from McCarthy, Rep. Andy Biggs of Arizona, former Freedom Caucus chief, told CNN: “Heck, yeah.” He also told OAN that the reports are “problematic” and created a “huge trust issue” for him.

But even as some members privately seen over McCarthy’s remarks, the Freedom Caucus didn’t even discuss the minority leader during its weekly meeting Tuesday evening, said sources in the room — a sign that the rabble-rousing group is content with tabling the issue , at least for now.

“We are more united than ever before under McCarthy’s leadership,” said Rep. Randy Weber, a Texas Republican who’s a member of the House Freedom Caucus.