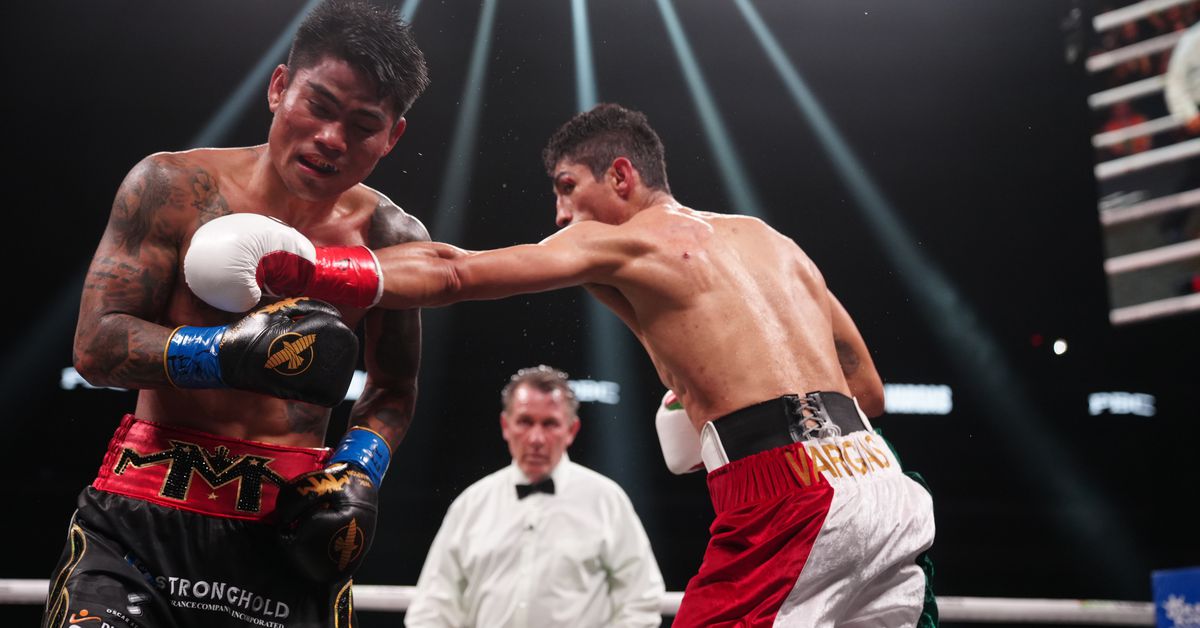 But Magsayo also did have a tough time with Vargas’ length and movement, even if Vargas was sitting down on punches and engaging more than we’ve also often seen in the past. On paper, this would have given Magsayo a better chance, and it may have been the biggest thing keeping him alive through the end of the fight.

Magsayo did score a knockdown in round nine, a clean right hand shot that Vargas walked onto throwing a punch of his own, which he’d done a few times. But Magsayo, who usually jabs well, didn’t or couldn’t use that punch nearly as much as he generally prefers, and there were rounds where Vargas just clearly had his way, and built up some good momentum in the third through eighth rounds especially.

Magsayo did seem to have a decent shot late, too, but may have dropped the 11th and 12th rounds to seal the win for Vargas.

“This is my second world title, this one’s going back to Mexico,” Vargas said after the fight. He admitted Magsayo “got him” with the knockdown, but said, “I was in control the whole fight (other than that), he got me there and I lost a little control.”

Asked about what he’ll do next, Vargas replied, “Either a unification or Leo Santa Cruz.” santa cruz would be a unification, as Santa Cruz still laughably holds the WBA featherweight title. He will have a WBC order to fight Brandon Figueroa at some point, too.

“He was his day, he was the man of today. I’ll come back stronger. I’m a bit disappointed, but I did my best,” Magsayo said. “He did his job in the ring, running, so that’s OK. He was taller and he’s the man today.”

Vargas came over to congratulate Magsayo and trainer Freddie Roach, and Magsayo said he’ll watch the fight back and get back in the gym to come back.

Some discussion about the stoppage here, in part because it was easy to see Castro having won four of the first five rounds, though he had been down in the third, and in part because it seemed like referee Mark Nelson jumped in as soon as he got the chance when Figueroa (23-1-1, 18 KO) turned Castro (27-2, 12 KO) against the ropes and started throwing shots.

But replays showed Castro definitely taking a few real clean ones, and Nelson said he saw Castro’s eyes go unfocused. Referees are right there, I’m not and neither is anyone else. And more than that, even, Castro did not complain about the stoppage. If you go with nothing else, go with that, is my general advice.

Figueroa, 25, wins a WBC eliminator at featherweight here, so he’s in line for a shot at the title now, and it’d be a good matchup, better than many world title fights even if Figueroa-Castro never should have been an eliminator at 126 given both were coming off of losses at 122.

It was an entertaining fight, too. Figueroa always is fun to watch, very flawed but also really tough, doesn’t discourage easily at all, and picks his spots when to put on big pressure. That’s what got him through here, because I don’t think it’s unfair at all to say that the 28-year-old Castro was clearly the better pure boxer, and having a lot of success. I had him up 48-46 after five rounds, Wil had the same, Showtime’s Steve Farhood had the same.

So yes, Figueroa will always be vulnerable to getting out-boxed, but the opponent has to be able to weather his storms, too, because he’s going to bring them.

“Carlos Castro’s a great fighter,” Figueroa said. “I know he’s a crafty fighter, I had to be patient. I had to put the pressure on. I got a little tired (after the third), but I knew he was hurt (in the sixth) and I had him, so I had to put on the pressure.”

This was a short-notice fight, as Marinez came in on just over a week’s notice to replace Ricardo Nunez, and Martin allowed for a 138 lb catchweight to make the fight happen. Boxing fans got a win with this, because Marinez (19-3, 7 KO) gave Martin (16-0, 12 KO) a much better fight than I think anyone expected Nunez would have.

We said it a bunch during the fight, but if Marinez had gotten this with proper notice, it might have been even better. But we got what we got, and we saw Marinez again give a really good effort but again lose. It’s the third fight in a row he’s lost, and the second in a row that wasn’t him being absolutely jobbed on the cards, and yet I come out of this still thinking Marinez is a good, tricky opponent for a lot of guys at 135.

Martin, though, did the job. He did have some frustrating rounds in the middle with Marinez, but once he got his right hook going late, he had a wrap on things.

Martin is 27 so he’s really not “prospect age” and he’s never been super hyped as some blue chipper, but the skills he has are the type that if he really maximizes them, yeah, he’s a very dangerous fighter. I’d think of him perhaps as something like an undrafted free agent who turns out really can play in the NBA, like a Fred VanVleet or, I don’t know, pick your favorite example. VanVleet springs to mind. And however you get to the top, it’s just about getting there. Every top NBA player wasn’t a top draft pick, every top boxer wasn’t a super hyped amateur from age 13 on or whatever.

Bottom line, Martin can fight, and he says he “wants them all” and is looking for a big fight next at 135. Hopefully he gets another good step up. This was a solid test and he passed it.