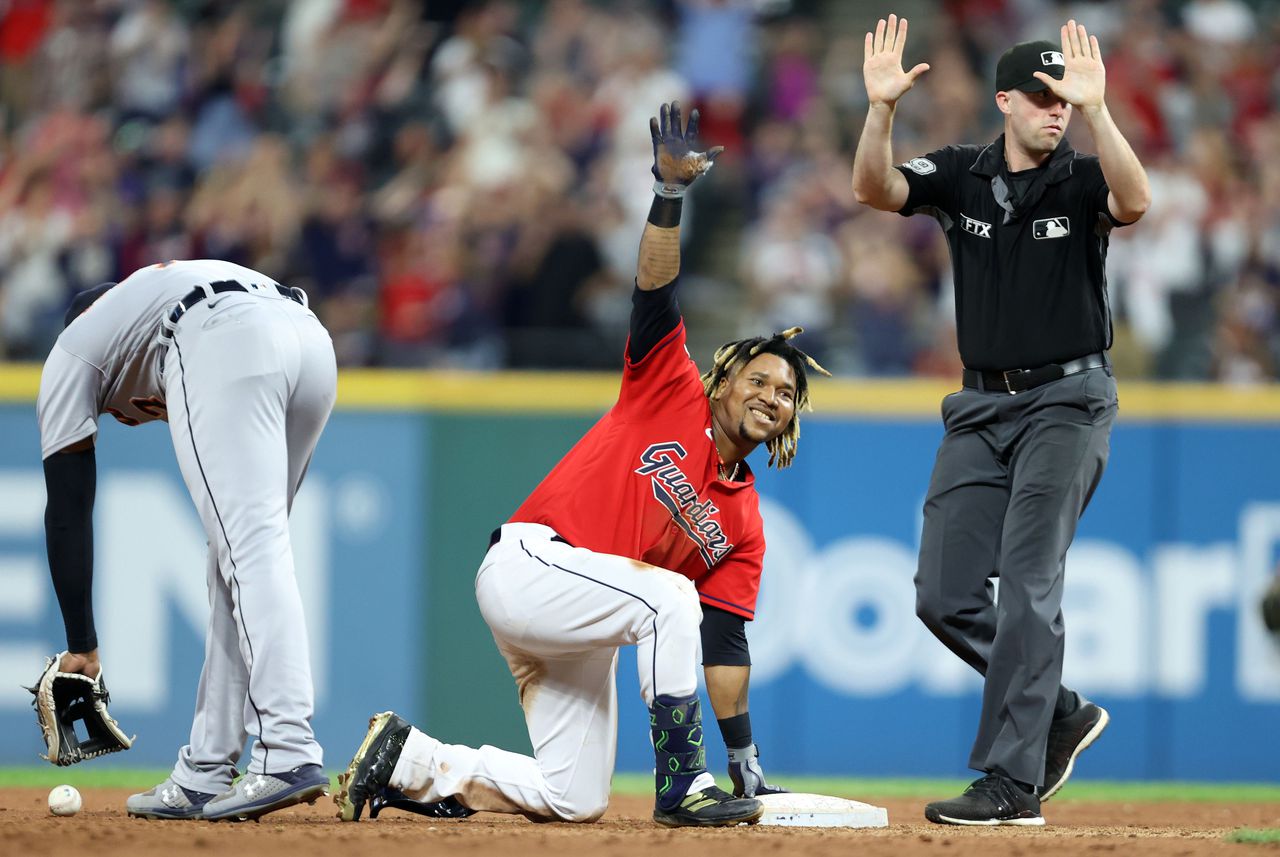 CLEVELAND, Ohio — Down by a pair late, the Guardians staged an improbable six-run rally Wednesday and upended the Tigers for an 8-4 win at Progressive field. Cleveland hitters struck out three straight times to open the bottom of the inning, and then went on to score six runs, all with two outs.

Luke Maile sparked the comeback when he reached first base on a dropped third strike by Detroit catcher Eric Haase. Maile swung and missed at a slider in the dirt from lefty Andrew Chafin and the ball got away from Haase as Maile sprinted to first. Myles Straw singled up the middle and the rally was on.

After going 0-for-11 with runners in scoring position to start the game, Cleveland went 5-for-5 in the eighth, led by Steven Kwan and the top of manager Terry Francona’s lineup.

Kwan’s RBI ground-rule double down the right field line cut Detroit’s lead to a run, and Amed Rosario tied the score at 4-4 when he legged out an infield hit as Straw crossed the plate.

“How many times do you hear me say ‘Keep playing, keep playing?’” Francona said. “That was kind of the ultimate (example).”

José Ramírez sent a bloop double to the left that dropped in front of Detroit’s Akil Baddoo and squirted toward the left field line allowing two runs to score. It marked the 11th career go-ahead RBI in the eighth inning or later for Ramírez, and the second time he’d done so this season. Oscar Gonzalez added an RBI double high off the wall in the left and later scored on Owen Miller’s RBI single that put the Guards ahead by four.

It marked the first time since at least 1961 that a team struck out three or more times in an inning before scoring six or more runs in that same inning, per Elias Sports.

“Hitting is contagious,” Kwan said. “There’s a little suspense that comes with it, too. We always think that we’re in it, and it just takes one guy to get it going. Hitting is contagious, barrels or outs. We got some lucky balls to fall. That’s just baseball. But we got on top.”

The Tigers expanded on a one-run lead in the fifth with an RBI single by Victor Reyes and added another run on a solo home run by Willi Castro in the sixth against Cleveland starter Cal Quantrill.

“I just took my foot off the pedal,” Quantrill said. “Not purposely. I just got a little out of rhythm, was leaking the fastball, That really was the only thing you can’t do in that situation.. It can’t happen, but I got saved today so we’ll let it go.”

Quantrill avoided suffering his first career loss at Progressive Field, exiting after the sixth when Cleveland trailed by three runs. Quantrill allowed four runs on five hits and struck out a pair in his 27th career appearance at the ballpark.

The win kept Cleveland in first atop the American League Central Division, one game ahead of Minnesota, which defeated Kansas City earlier in the day. It also gave the Guardians a season series win against Detroit, 10-9 and even the all-time series between the two clubs at 1,144 wins apiece. Cleveland has now won seven consecutive season series against the Tigers since 2016.

It also marks 10 consecutive series overall that the Guardians have either split or won, the most since August of 2017.

Gonzalez put Cleveland in front with an RBI double in the third after Norris hit Ramírez. He was the sixth hit on the homestand for Gonzalez and his 20th hit in August, tying him for fourth most for the month in the American League.

But Quantrill handed the lead right back in the fourth, loading the bases on a pair of walks to Riley Greene and Reyes and a bloop base hit by Javier Baez. Kerry Carpenter plated Reyes with a sacrifice fly and Haase put Detroit in front with an RBI single on a ground ball up the middle.

“Unfortunately he lost the plate for like eight pitches, arm-side, and it was the two walks,” Francona said. “It came in that inning where they kind of bunched things together. He’s been pitching really well. He just lost the strike zone for a little and it cost him.”

Cleveland added a run in the sixth when Andrés Giménez doubled and moved to third on a ground out by Maile before scoring on a passed ball by Haase.

Bryan Shaw retired the only batter he faced in the eighth to pick up his sixth win (6-2, 5.36). He entered the game after James Karinchak worked an extended 1 2/3 innings of relief and improved his scoreless innings streak to 16 1/3 since July 9. It’s the longest active scoreless streak among AL relievers. Karinchak struck out the side in the seventh and has a strikeouts per nine innings of 16.57 during his scoreless stretch.

“His curveball is exceptional, and he’s got life on his fastball,” Francona said. “That’s why I went out to get him. I just thought that’s a lot of pitches and I don’t want to over-do something.”

Next: The Guardians are off Thursday before opening a three-game weekend series Friday against the White Sox at Progressive Field. Cleveland will send right-hander Triston McKenzie (8-9, 3.14) to the mound against Chicago righty Lance Lynn (3-5, 5.62). First pitch is set for 7:10 pm The game will air on Bally Sports Great Lakes, WTAM 1100 AM, WMMS 100.7 FM and the Guardians Radio Network.

Guardians merchandise for sale: Here’s where you can order new Cleveland Guardians gear, including T-shirts, hats, jerseys, hoodies, and much more.

Guardians lose an out, Tigers gain a run on home-plate collision ruling

Sweet noise from the bottom of the lineup: Guardians takeaways